This page is for the Polynesian Pantheon deities that are playable in Smite. The entirety of any God's lore can be found on the official Smite website. 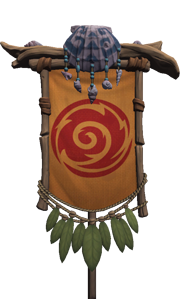 Polynesian Pantheon trademark icon
The deities and mythological characters of Hawaii which are playable in Smite. The Pacific Mythology page deals with and can provide beneficent information about their real world counterparts.

The Polynesian Pantheon has no Warriors so far.

The Polynesian Pantheon has no Guardians so far.

The Polynesian Pantheon has no Mages so far. 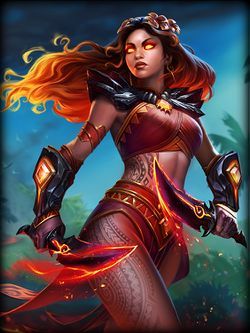 The goddess of fire and volcanoes and the creator of the Hawaiian Islands.

Pele is an Assassin goddess whose abilities all have multiple stages, granting her multiple chances to deal damage. Her passive, Everlasting Flame, triggers when she drops below 50% health, granting her increased physical power, lifesteal, and ability lifesteal. This buff only lasts for a few seconds, and has a 30-second cooldown before it fires again. Her first ability, Pyroclast, fires a magma orb in front of her, dealing damage. Once it reaches a maximum distance it stops and fires shards back at Pele's position, each one also dealing damage. The number of shards fired depends on how many ranks Pyroclast has, and Pele is able to store 2 charges of it for use. Her second ability, Eruption, explodes the area around her, damaging and knocking up enemies. Ranks 3 and 5 fires additional explosions at larger rings around her, though the outer rings deal less damage and knockup. Her third ability, Magma Rush, puts Pele in an amplified state, damaging nearby enemies and increasing her movement speed while active. Rather than a cooldown, Magma Rush instead uses a special fuel gauge; the ability has an initial cost before draining fuel over time, and cannot be used when too low. Firing it again while it is already active puts her in a further amplified state, increasing the damage and movement speed even further at the cost of draining fuel much faster. Her ultimate, Volcanic Lightning, is a dash that heavily damages and slows the first enemy god it hits, while also creating a burst of electricity that deals damage behind the enemy in a cone. Afterwards, her next 3 basic attacks within the next 10 seconds deal 50% less damage but will generate electrical bursts like the first, dealing ability damage in a cone behind the enemy.

The Polynesian Pantheon has no Hunters so far.