This page is for the Arthurian Pantheon deities that are playable in Smite. The entirety of any God's lore can be found on the official Smite website. 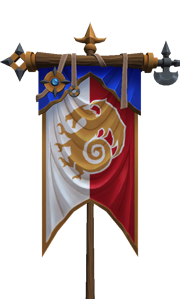 Arthurian Pantheon trademark icon
The people and mythological characters of the king Arthur tales which are playable in Smite. The King Arthur page deals with and can provide beneficent information about their real world counterparts. 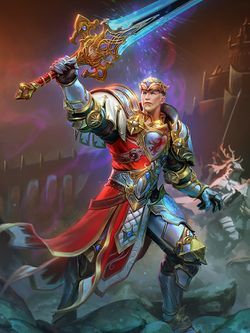 "Ruin will not come to this land! I will not allow it!"

The legendary King of Britain, King Arthur wielded the legendary blade Excalibur and led the Knights of the Round Table from his castle Camelot. There are many versions of his story, but those were the constants of the legends of King Arthur, where he delivered peace, the bloodshed ceased, and the people united under his reign.

The order he created was fated to end one day. When Arthur was away, his son and fellow Knight of the Round Table, Mordred, betrayed him and took over a number of his domains, threatening to turn all he held dear into ashes. King Arthur took up arms and fought to reclaim Camelot, but the battle was a huge disaster, ending his bloodline and the stability of Camelot.

It was said that he perished during that fateful battle, but the legendary King could be seen amongst Gods, on a journey after the destruction of Camelot. He was merely answering the call of the Avalon, the place where he rested after the fall of Camelot, said to have the power of immortality which enabled him to fight against immortal Gods.

King Arthur is a Warrior god that chains his skills into a combination to create a continuous strike that shreds down his enemy. Thanks to his passive, Steadfast, everytime he uses his skill once, he switches his Standard skill set into his Combo skill set and every time he hits someone with his skills, which are all instant-cast, he will gain stack of protection and fill up a separate Energy meter for his Ultimate. Also thanks to this, Arthur does not benefit on Attack Speed bonus, if he buys an item with it, part of the bonus will be transferred to the speed of how his Energy meter fills up. His first Standard skill is Overhead Slash, where Arthur slashes down Excalibur and unleashes a moving pillars of energy that act like a beam forward, damaging anyone hit with it and the one that is directly slashed by Excalibur in close range also take extra damage. In his Combo stance, the skill becomes Hamstring, where Arthur slashes in a cone and cripples anyone hit with it. His second Standard skill is Battle Stomp, where Arthur stomps the ground with one foot and it creates a quake that damages and slows down everyone caught in it. In Combo stance, this becomes Uppercut, where Arthur dashes forward and on contact with the first God or at the end of the dash, he swings Excalibur upwards and knocks anyone caught in it to the air. His third Standard skill is Twin Cleave, where Arthur charges forward and swings Excalibur twice, hitting anyone that comes in contact with it and reducing their protections. The Combo equivalent of this skill is Bladestorm, where King Arthur charges and spins with Excalibur five times before one final, more powerful strike. His default Ultimate is Sundering Strike, where Arthur dashes forward and massively stabs the enemy with Excalibur, stunning them for one second, which can be inflicted to all enemies lining up in Excalibur's strike. This costs 35 Energy, but if Arthur has generated 80 Energy instead, this becomes Excalibur's Wrath, where Arthur dashes forward, and if he makes contact with an enemy God, he slashes the enemy upwards and before they land, he jumps off and slashes the enemy mid-air several times before knocking them down and damaging any other enemies within the landing point.

The Arthurian Pantheon has no Guardians so far. 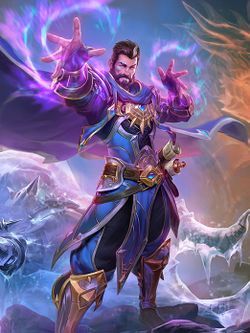 "Ah yes, a land in need of true saviours! The pen is laid to rest and the story begins once more."

The legend of King Arthur is well-known, but just who set his story into motion remains entirely mysterious. His origins, the source of his powers, and even who he really is known only to him. Is he just a very powerful man? A demon? Something in between? Regardless, Merlin is doubtlessly Arthur's incomparably wise and powerful right hand.

When kings warred ruthlessly against each other, Merlin pledged his services to many of them as an advisor by words and a devastator by magical might. He also practiced the ways of prophesy, and foresaw a ruler beyond all others to one day stand and unite the line under his reign.

Uther Pendragon would die fighting the Saxon invaders, and Merlin swore his loyalty to his successor, Arthur. They would prove to be inseparable as they united Britain under the benevolent and peaceful rule of Camelot and beat back the Saxons across the sea.

Merlin is a triple-stance Mage god who can switch between the schools of Arcane, Fire and Frost (and use a bit of lightning). His passive, Overload, grants him charges every time he uses an ability, which can last up to a short duration and stacks three times. Doing a basic attack consumes a charge to cause the attack to do some extra damage courtesy of lightning. His first and second abilities vary based of his stance. The first ability can be Arcane's Eclipse which creates an orb of celestial energy that does initial damage to enemies it passes through and grows in size as it reaches its target location, then stays to cause continual damage to enemies that remain in range of it, Fire's "Radiate" which has Merlin channel a beam of fire in a line in front of him that causes damage and applies a burning effect to cause even more damage over time while he may move and rotate freely while channeling, or Ice's "Frostbolt" where Merlin shoots an icicle forward that explodes upon impact with an enemy and causes more damage if they are slowed. The second ability can be Arcane's "Vortex" which creates a circle at a location that pulls in enemies to it and causes damage after a delay, Fire's "Dragonfire" which summons two dragon heads facing each other that continuously breath out damaging cones of fire and reduce the protections of enemies' hit within the space that the two cones intersect, or Ice's "Blizzard" that drops shards of ice onto a circle after a brief delay that damages enemies and slow them more severely as they stay within the circle. His third ability, unlike the others, is the always-entirely-the-same "Flicker" (aside from the icon changing color with his stance) which has Merlin teleport a short distance in front of him nigh immediately and does not affect his movement's momentum (such as the basic attack movement penalty remaining in effect if he attacks right before he uses Flicker). His ultimate is Elemental Mastery: This ability is available at level 1 and without any points invested into it, it can change Merlin's stance by using the ultimate and then using the other ability hotkey that corresponds to each stance (first ability's Arcane, second ability's Fire, third ability's Ice). With points invested, Elemental Mastery also explodes out and then implodes from Merlin causing damage twice, and applying additional effects to the explosion and implosion based off the stance Merlin changed out of and into. Arcane knocks up enemies, Fire applies a damage-over-time efect, and Ice slows.

The Arthurian Pantheon has no Assassins so far.

The Arthurian Pantheon has no Hunters so far.