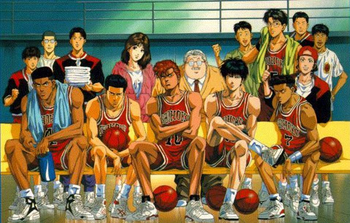 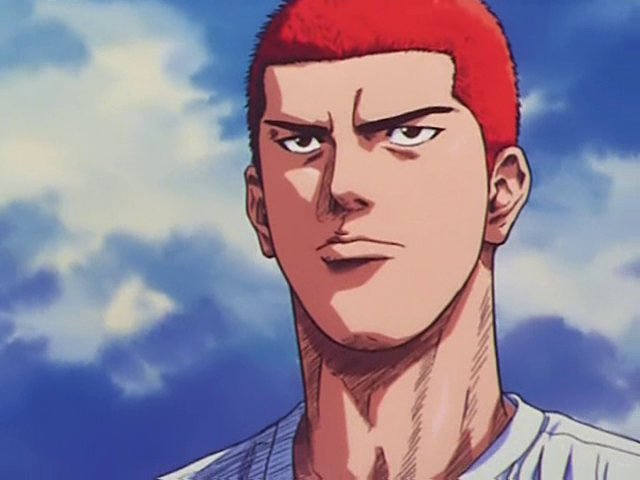 Hanamichi Sakuragi is the protagonist of Slam Dunk, serving as Shohoku's power forward. At the beginning of the series, Sakuragi is a slacker, good for nothing other than fighting. He is the leader of the feared "Sakuragi's Gang", which consists of his four friends Mito, Noma, Ohkusu and Takamiya. After being rejected fifty times by girls, Sakuragi meets and falls in love with Haruko Akagi, a basketball fangirl. This and Haruko's encouragement lead him to join the Shohoku basketball team. 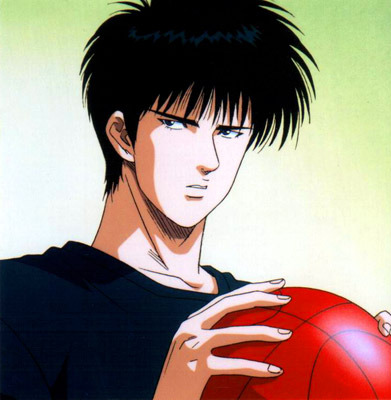 Kaede Rukawa is the small forward of the Shohoku team, and Hanamichi Sakuragi's rival as well as his opposite; attractive to girls, skilled at basketball, and very cold and aloof. Although he does share some traits with Sakuragi in that they are not academically inclined and are good fighters. Although he regards Sakuragi as an idiot and the two frequently get into conflicts, he knows that Sakuragi can put his talents to better use. 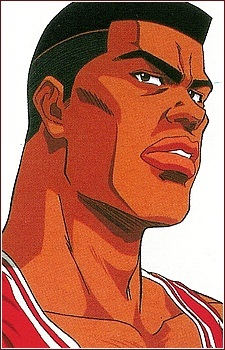 Takenori Akagi is Haruko's older brother, serving as Shohoku's captain and center. Along with Kogure, he is the only other player who stayed on the Shohoku basketball team for all three years. Before he met the current Shohoku members, he had to overcome ridicules from his classmates (for dreaming of winning the national championship), doubts from bystanders, and the frustration of losing his teammates, as they found Akagi's training to be too difficult and harsh.

Ryota Miyagi is the point guard of the Shohoku team and Hanamichi Sakuragi's closest friend on the team. After an initial misunderstanding that caused conflict between them, both found comradeship in the fact that they had both been unlucky in love, although Miyagi, having only been rejected 10 times, still falls short of Sakuragi's record of 50 rejections. 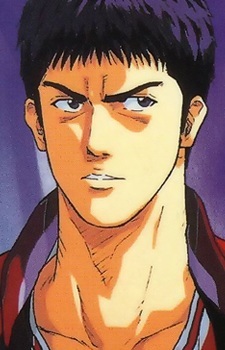 Hisashi Mitsui is the shooting guard of the Shohoku team. Before the beginning of the series, he was the MVP in his final year at Takeishi. Despite having the opportunity to join more prestigious high schools like Ryonan, he chose to go to Shohoku because of Coach Mitsuyoshi Anzai. Anzai had given him the courage to win in the Junior High tournament by encouraging him during the last seconds of the match. However, an injury to his left knee in a training session in his first year at Shohoku interrupts his basketball career. An imprudent early return to the court severely injures the knee, leading to a basketball hiatus of over a year. Although he eventually healed, Mitsui was embittered by his exclusion from the court and quits basketball to become the leader of a gang. 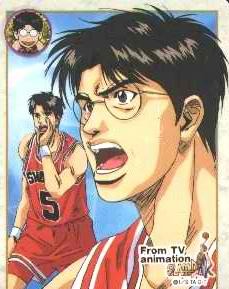 Kiminobu Kogure is Shohoku's vice-captain and a good friend of Akagi and Mitsui. Akagi and Kogure are friends and teammates from their middle school years. 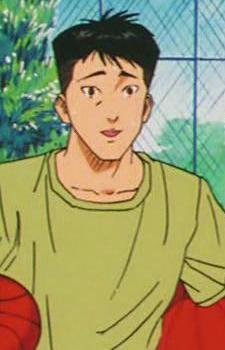 Yasuharu Yasuda is one of the minor players from Shohoku. Although Hanamichi picks on him (Hanamichi calls him "Yasu"), he is no pushover, as demonstrated when he stood up to Mitsui and Tetsuo when they were attempting to get the Shohoku team banned from competition for fighting. He is Ryota's close friend, and thanks to his mild and calm character he can manage to calm things down when the tension on the court starts to heat up.

Ayako is the manager of the team and object of Ryota Miyagi's affections.

Mitsuyoshi Anzai is the overweight coach of the Shohoku basketball team, and one of the best coaches in Japan. Even the coaches of other teams call him "Anzai-sensei" with respect. His calm and collected attitude contrasts with the temper he had in the past, when he was nicknamed "White-Haired Devil" as a demanding college coach. 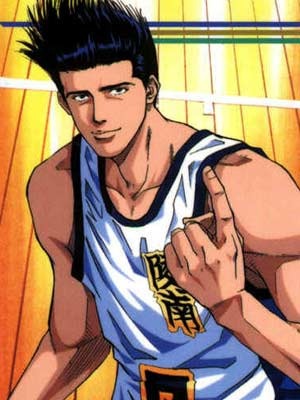 Akira Sendoh is Ryonan's ace and small forward who is considered one of the top players in Kanagawa. An easygoing person, Sendoh usually has a smile on his face whether on-court or off. He can be lazy at times and has a reputation for arriving late to practice sessions and matches. His tardiness is tolerated though, because of his abilities. His teammates trust him wholeheartedly, firmly believing that he can lead Ryonan to victory even if they are trailing. However he was outplayed by Eiji Sawakita back in junior high.

Jun Uozumi is Ryonan's captain and center. He considers Takenori Akagi his rival, but has never managed to personally beat him, although Akagi considers him to be better. However their rivalry is not antagonistic, as there is a mutual respect that borders on friendship.

Hiroaki Koshino is a shooting guard and one of Ryonan's main playmakers. Although not up to the level of Mitsui or Jin, he is still a good long range shooter.

Kicchou Fukuda is a power forward of the Ryonan team and one of their aces. His offensive power rivals many of the best players in Kanagawa. Fukuda is seen throughout the series doing alley-oops with Sendoh as the passer, but his defensive ability is weak and can be easily exploited. He has something of a rivalry going on with Sakuragi from the first time they learn of each other, when the latter was depressed over the loss to Kainan and was near a basketball court where Fukuda was practicing. 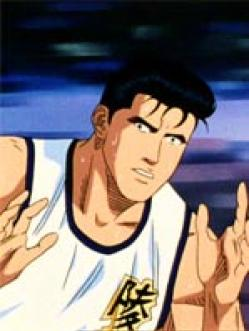 Ryoji Ikegami is the vice-captain of the Ryonan basketball team, and its best defender. As a third year student, he retired along with Uozumi after Ryonan lost to Shohoku. 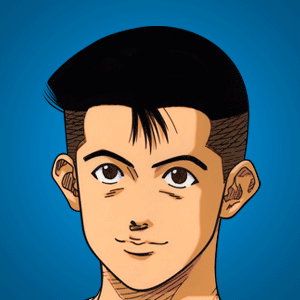 Hikoichi Aida aspires to become a player like his Ryonan teammates but, not being up to their level, he stays with the reserves and acts more as a team manager than a full player, taking detailed notes during matches. 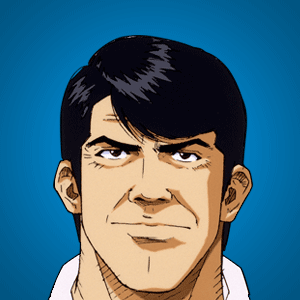 Moichi Taoka is Ryonan's coach and a contemporary of Kainan's Riki Takato, who is a year younger than he is. Both of them have known each other since high school. Both men are still friends, but are also rivals. 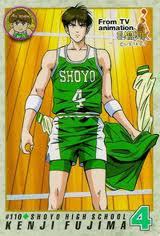 Kenji Fujima is the point guard and coach of Shoyo. As such, he only enters the court when his presence is really needed, such as when the team is behind and struggling.

Toru Hanagata is considered one of the top centers in the Kanagawa along with Akagi and Uozumi. He mixes strength and tactical skill in his playing, being able to easily avoid defensive play. 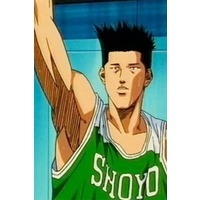 Kazushi Hasegawa is the forward and has a personal history with Hisashi Mitsui. 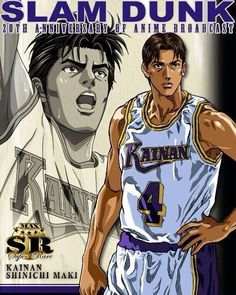 Shinichi Maki is the point guard of the Kainan team and is reputed to be the best player in Kanagawa, and was crowned prefectural MVP twice. 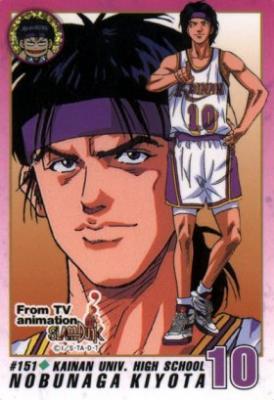 Nobunaga Kiyota is the small forward of the Kainan team who closely resembles Sakuragi in attitude but has the skills to back it up. 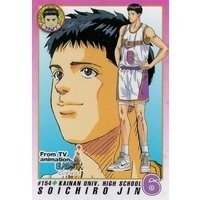 Soichiro Jin is the shooting guard of Kainan and one of the best sharpshooters in Kanagawa, matched only by Mitsui. 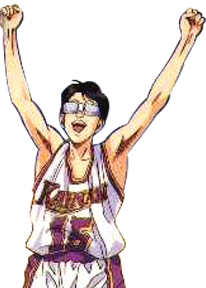 Yoshinori Miyamasu is known as the sixth man for Kainan. 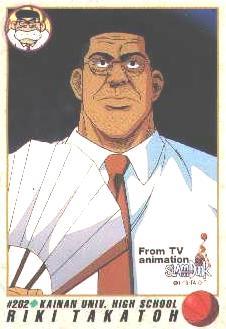 Riki Takato (高頭 力 Takato Riki?) is Kainan's coach and a contemporary of Ryonan's Moichi Taoka, who is a year older than he is. They have known each other since high school.

Tsuyoshi Minami is the captain of Toyotama High School and one of the two aces, the other being Kishimoto.

Haruko Akagi is Takenori's younger sister and Hanamichi Sakuragi's love interest. Sweet and with a captivating personality, she is always around to cheer on the players, especially her brother Takenori, who is extremely protective of her and taught her the basics of basketball, Kaede Rukawa and Sakuragi, whom she considers her best friend. Haruko often appears at matches together with Sakuragi's cohorts and her two best friends, Fujii and Matsui. She, like most girls in Shohoku, only has eyes for Rukawa, although he is unaware of her feelings towards him.

A group of girls who are often seen cheering for Rukawa.