The main characters of The Elder Scrolls V: Skyrim. For the full list of characters, click here. 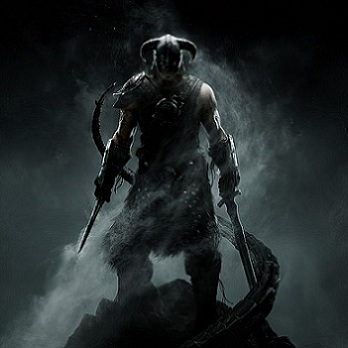 Beware, beware, the Dragonborn comes....
"And the fiercest foes rout when they hear triumph's shout..."

The Dovahkiin is The Chosen One of prophecy, foretold to be the one to defeat Alduin, who is poised to destroy all of Nirn. They turn out to be a penniless prisoner waking up in the back of a cart and about to be executed.

will want a piece of them. There's a reason why Nords became a Proud Warrior Race.

Tropes relating to all Dragons 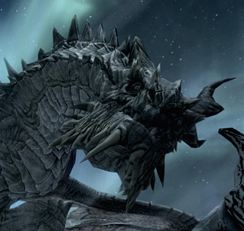 "What is better? To be born good, or to overcome your evil nature through great effort?"
Voiced by: Charles Martinet

An ancient dragon who turned against Alduin and aids the Dovahkiin. 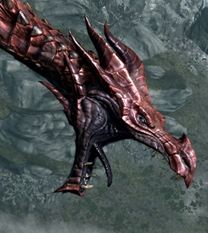 "As for myself, you've proven your mastery twice over. Thuri, Dovahkiin. I gladly acknowledge the power of your Thu'um."
Voiced by: Charles Dennis 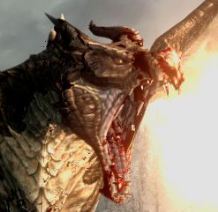 The first dragon the Dovahkiin officially takes on in the main storyline. You fight him during the quest "Dragon Rising" at the Western Watchtower near Whiterun. 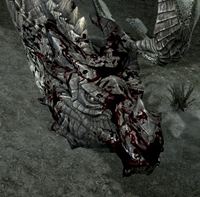 "I am Sahloknir! Hear my Voice and despair!"

Another named dragon, encountered at the end of "A Blade In The Dark." 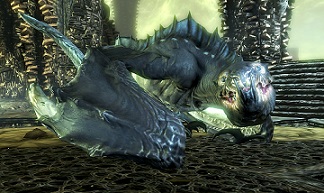 A Serpentine Dragon bound to Miraak's will, he serves as Miraak's personal mount and literal The Dragon.

The other named dragons that aren't major players in the storyline. 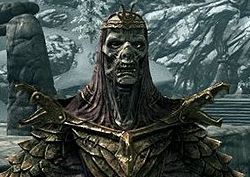 During the Dragons' reign over Mundus in the Merethic Era, they had mortal followers known as the Dragon Cult, led by powerful mages known as Dragon Priests. Although the Cult itself is long dead, Alduin's return has caused several of these Dragon Priests to rise from their graves and terrorize Skyrim. The eight most powerful Priests each possess a mask imbued with powerful magics.

For Miraak, the Dragon Priest who serves as the antagonist for Dragonborn, see the DLC character page.

Heroes of Skyrim
Gormlaith, Hakon, and Felldir are the ancient Nord heroes who helped to overthrow the dragons in the Dragon War. After Gormlaith was killed, Felldir used the Elder Scroll to banish Alduin. 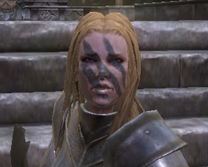 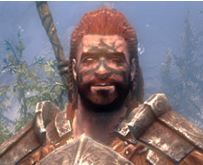 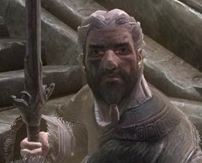 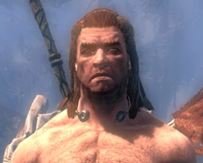 A small group of hermits who live in High Hrothgar high atop the Throat of the World. They are human practitioners of the Thu'um, and call the Dragonborn to test their abilities and teach them to hone their skills. To the Greybeards, practicing the Thu'um is a form of worship to honor the gods (particularly Kynareth and Akatosh, who gave the gift of dragon blood to humans), but they also consider it a responsibility and honor to train the Dragonborn. 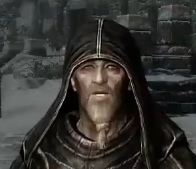 "We have felt the whisper of a Word... Give me your map, and I will show you where its echo can be found."
Voiced by: Christopher Plummer

The only member of the Greybeards who communicates normally, as the Voices of his fellows are too powerful; a word out of place from them could rip you apart.

See above in the "Dragons" section for the full list for Paarthurnax.

The other members of the Greybeards, they usually don't speak because of their destructive Voices.

This order of monastic warriors can trace their origins to the Akaviri invaders in the latter part of the First Era, who eventually bent knee to the Dragonborn known as Reman Cyrodiil. Originally an order of dragon hunters, the Blades are sworn to find, and then "guide and guard" any Dragonborn on the Mundus. The Dragonborn eventually known as Tiber Septim repurposed them into a combination of a spy agency and a royal bodyguard cadre when he became Emperor of the first truly pan-Tamrielic empire. After the passing of the Septim dynasty, they returned to seeking the next Dragonborn, but still rendered spy services to the Empire. They correctly deemed the Thalmor to be the biggest threat, but even they still vastly underestimated how dire a threat the Thalmor are. As a result, they were decimated by Thalmor hit squads preceding and during the Great War, and one of the terms of the White-Gold Concordat is the disbanding of the organization. Despite these hardships, a few Blades still survive and remain faithful to the cause. 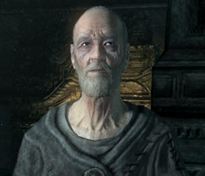 "But no one wanted to believe... believe they even existed. And when the truth finally dawns, it dawns in fire."
Voiced by: Max von Sydow 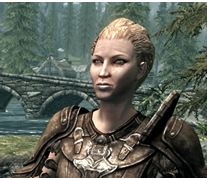 A member of the Blades who was hunted down by Thalmor prior to the game's start. He leaves his blade (Bolar's Oathblade) and Bolar's Writ inside Bloated Man's Grotto to whomever finds it.

A patron of the Nightgate Inn in the Pale, drinking bad memories of the war away.