"No, not the buttons! Not my gumdrop buttons!"

The Gingerbread Man aka Gingy is a live talking gingerbread man and one of Shrek's friends. He is also known as "Gingy" and was created by The Muffin Man. He is small and a fast runner, making him difficult to catch. He is made out of a normal carved-out gingerbread with icing and gumdrop buttons. 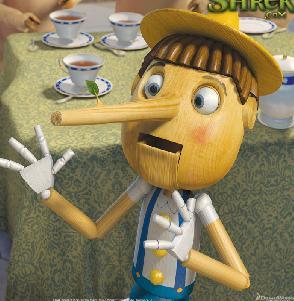 "On the contrary. I'm possibly more or less not definitely rejecting the idea that in no way with any amount of uncertainty that I undeniably..."

Pinocchio is a live wooden puppet who befriends Shrek. He cannot lie without having his nose growing very long, and he deeply dreams to become a real boy. 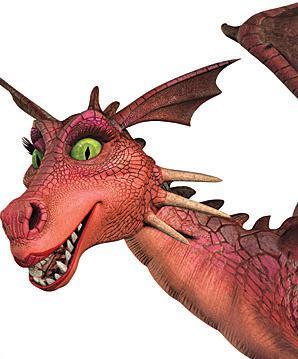 Dragon is depicted as a ruby-colored dragon who debuts as a ferocious guard challenging Shrek and Donkey in their quest to locate Princess Fiona. As Donkey attempts to distract her, he makes the realization that Dragon is female and successfully manages to charm his way past her. While she plays a minor role in this film, she reappears towards its conclusion at the marriage ceremony of Fiona and Shrek, in which Donkey takes her as his own bride. They are shown as a married couple by the events of the sequel; her character has a minor role as Donkey chooses to leave home on the grounds that she was behaving uncharacteristically ill-tempered, but is reunited with her husband towards the ending of the movie when it appears that her grouchy behavior was a result of pregnancy, and presents Donkey with their newborn hybrid children, the Dronkeys.

Dronkeys are the hybrid offspring of Dragon and Donkey. They are introduced in Shrek 2 as little more than a stinger gag. Audience members missed having Dragon in the film, as was revealed to the filmmakers during test screenings. Dragon reunites with Donkey in Far Far Away, only to have a surprise for him in tow—six young hybrid donkey-dragon children, who take to their father immediately. Donkey is delighted, and dubs the dronkeys "our little mutant babies". Their names are revealed to be Eclair, Bananas, Peanut, Parfait, Coco and Debbie.

The Big Bad Wolf is based loosely on the eponymous fairytale archetype, but breaks the mold by being a kind character. He rarely speaks, and when he does, his voice is somewhat dull and monotonous. He wears a pink dress, recalling the grandmother of Little Red Riding Hood. In the films, he is friends with the Three Little Pigs, despite an incident in Far Far Away Idol. In the first film, he is among the fairy-tale creatures who are banished to Shrek's swamp. 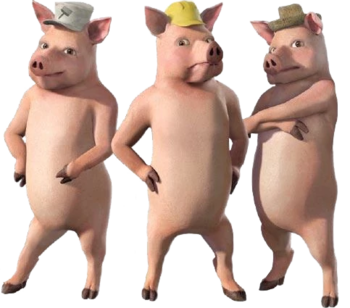 The three pig siblings and protagonists of their eponymous fairytale. They are often seen in company of the Big Bad Wolf and speak with thick German accents. 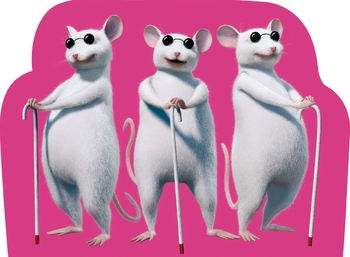 Identical white mice brothers that are blind and hang out with the other fairy tale creatures. They are based on the nursery rhyme characters of the same name.
King Harold 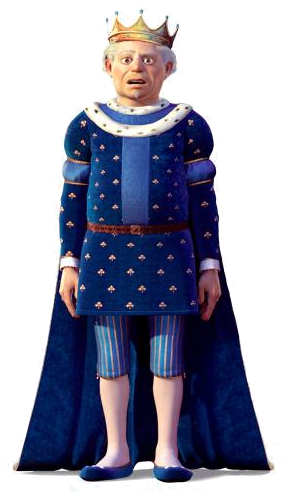 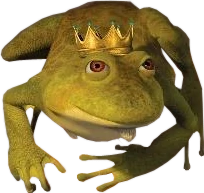 to see Harold's original form as a frog

"Well, I guess I gave her the wrong tea."

King Harold was the king of Far Far Away, husband of Queen Lilian, father of Princess Fiona, and father in-law of Shrek. He is also the original Frog Prince.

Queen Lillian is the queen of Far Far Away, wife of King Harold, mother of Princess Fiona, grandmother of the ogre triplets and mother in-law of Shrek. 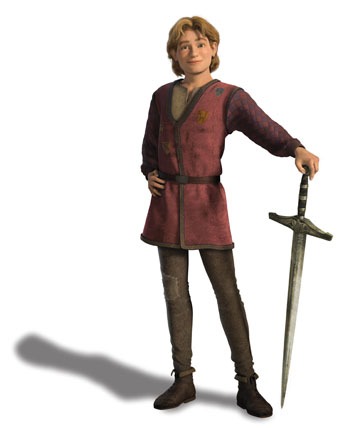 "You know, Shrek, you're all right. You just need to do a little less yelling, and use more soap."

Arthur Pendragon, or Artie for short, is a supporting character who appears only in Shrek the Third and is loosely based on King Arthur. He is the only heir apparent (other than Shrek himself) to the throne of Far Far Away. Artie is the cousin of Fiona. His father, presumably Uther Pendragon, seemingly abandoned him at the boarding school Worchestershire, where he remains until Shrek finds him. 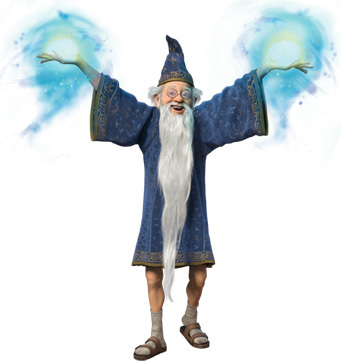 Merlin is a retired wizard teacher from Artie's high school, Worcestershire, in Shrek the Third. 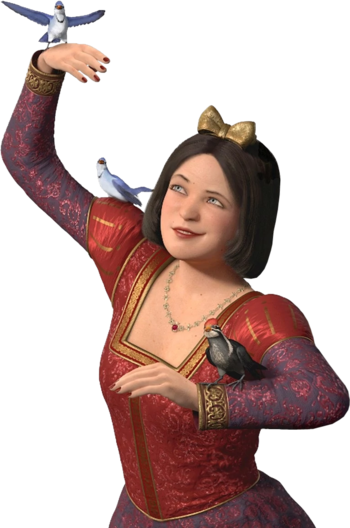 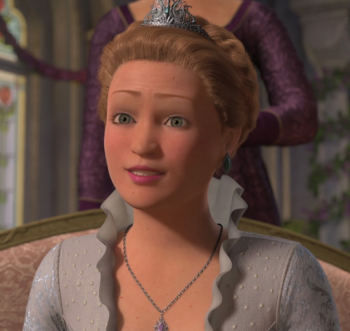 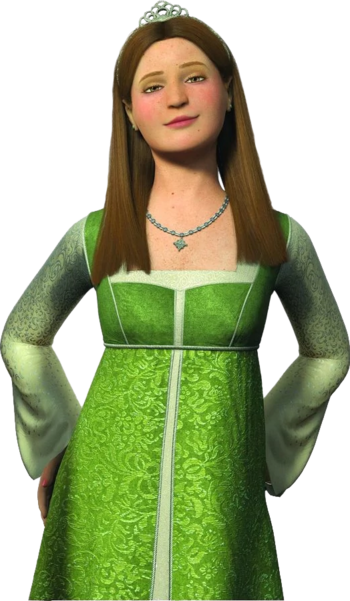 Fiona's friends and partners in training.

Tropes applying to all: 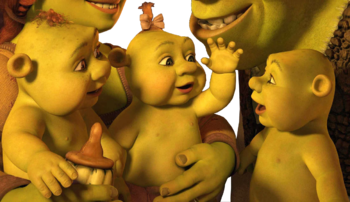 A trio of baby ogres born to Shrek and Fiona at the end of Shrek the Third.

A group of ogres led by Fiona against Rumpelstiltskin in Shrek Forever After. 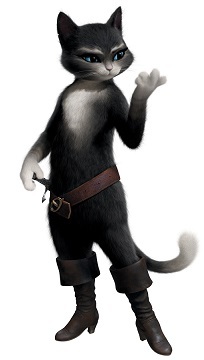 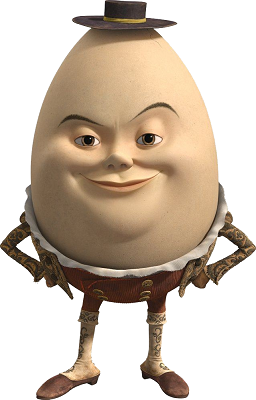 Humpty Alexander Dumpty appears in Puss in Boots. He was childhood friends with Puss and tried to get him to rob a bank with him making wanted by the law. Years later Humpty along with Kitty Softpaws convinced Puss to help him get magic beans from Jack and Jill to get the Golden Goose but it was revealed that this was just a trap to just get Puss back home and arrested as revenge for abandoning him. But later Humpty had a change of heart and help Puss and Kitty fight The Great Terror and ends up breaking and is revealed to be a golden egg himself.

In Shrek SuperSlam, he is known as Master Fu and is an unlockable character. In Shrek 4-D, his grave can be seen in the cemetery.note This entry can refer to the video game and movie iterations. 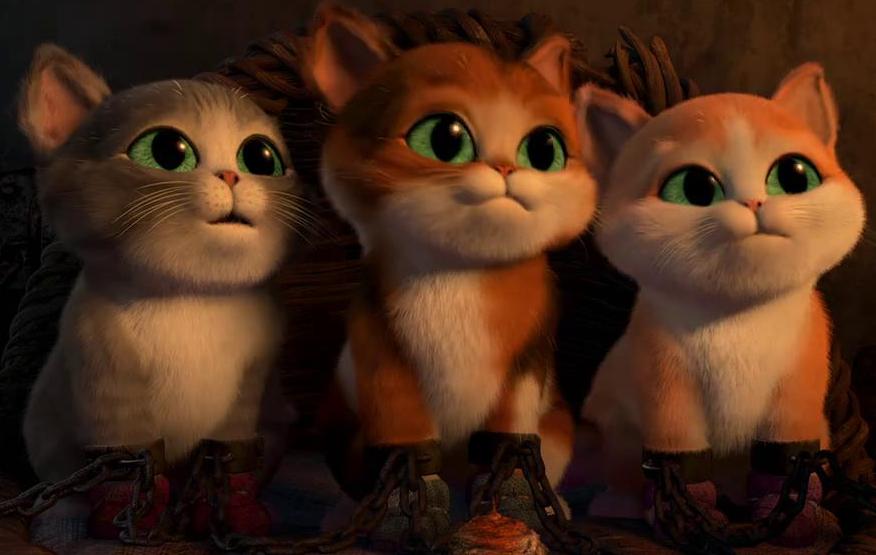 A unicorn who appears as an unlockable fighter in Shrek SuperSlam. 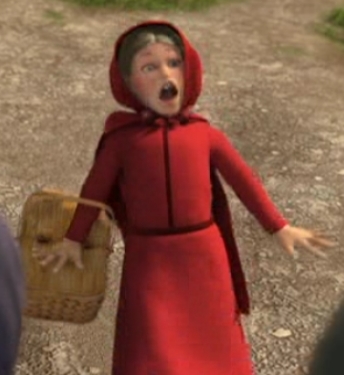 A red hood-wearing little girl. In the movies, she's a minor character who is scared of Shrek and Fiona, while in the games she's a sassy, altruistic softball pitcher who tags along with Shrek and Fiona on their trip to Far Far Away after they helped her obtain chickens for her soup.

A fairy who helps break Shrek, Donkey and Puss out of prison in the Shrek 2 game.

A little girl who runs afoul of three bears after sneaking into their cottage and eating their porridge. In Shrek Smash N'Crash Racing, she appears as an unlockable racer, having apparently befriended Papa Bear at some point.