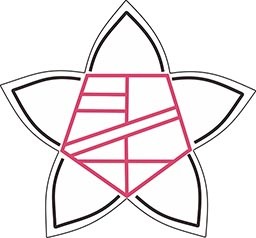 A prestigious performing arts school with a proud history of 100 years that fosters and nurtures talented individuals in all forms of revue. Seisho Music Academy is divided into two departments: the Actor Training Department, in which students are trained to be great stage actresses, and the Stage Production Department, in which students learn how to work behind the scenes to support the students of the former.

The franchise focuses on 9 students from the 99th class of Seisho, all of whom are aiming to be the one and only Top Star. 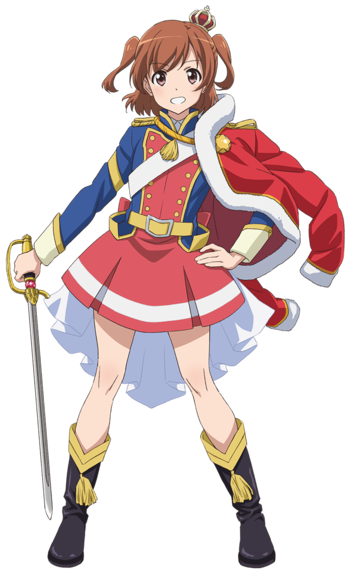 Portrayed by: Momoyo Koyama (Japanese), Brittney Karbowski (English)
"Atop a stage brimming with stardust, I am reborn,
Clad in the flowers of love that have so magnificently bloomed.
Student of the 99th Class, Karen Aijo!
Together, we will all do Starlight!"

A girl who was amazed by the play Starlight she saw as a child, and found herself on the path to a career in theater as a result. She's always energetic and has a loud voice, but is extremely weak in the mornings and hates morning practice.
Hikari Kagura 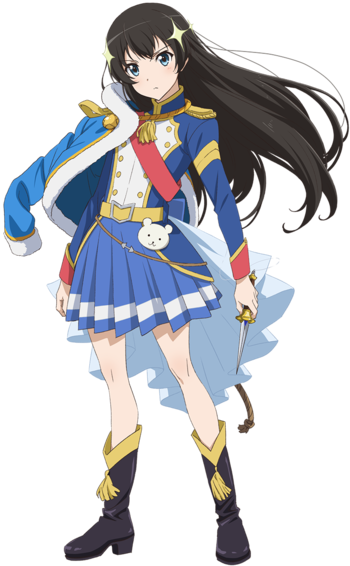 Portrayed by: Suzuko Mimori (Japanese), Patricia Duran (English)
"The vow from that day slipped from a hand
Held confidently aloft, falling into the abyss.
Though it may end in tragedy,
I will once again ascend the stage of fate.
Student of the 99th Class, Hikari Kagura!
All this...is for the sake of Starlight!"

Karen's childhood friend who had been studying abroad at a school for the performing arts in England. Her returning to Japan and reuniting with Karen is what starts the plot of the anime.
Maya Tendo

Portrayed by: Maho Tomita (Japanese), Olivia Swasey (English)
"The star of love which shines on the moon...
Now, gather that outpouring of light and send it to your heart!
Head of the 99th Class, Maya Tendo!
Tonight, I will show you the sparkle!"

A thoroughbred girl who is the offspring of a famous stage actor and a prima donna. Despite her beautiful physique, strong voice, and natural-born talent, she never sits on her laurels. She is a lone wolf who always aims to go higher.
Advertisement:
Junna Hoshimi 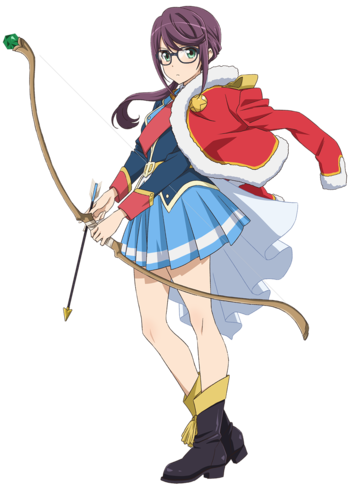 Portrayed by: Hinata Sato (Japanese), Shannon Emerick (English)
"Everyone has their own star of destiny.
Stars that shine, the morning star, stars that fall...
Though I may not yet see my own star, I gaze upward,
And on this day...I, Junna Hoshimi, student of the 99th Class,
Will take hold of a star of my own!"

An honor student and the class rep that has the best test scores in her grade. Though she has good judgment and the ability to analyze a situation, she has a tendency to overthink things. She chose to pursue theater despite her parents' objections. Her biggest worry is the gap in skill between herself and natural genius like Maya and Claudine.
Claudine: Th-This is quite an adult flavor! Children wouldn't understand this at all.
Mahiru Tsuyuzaki 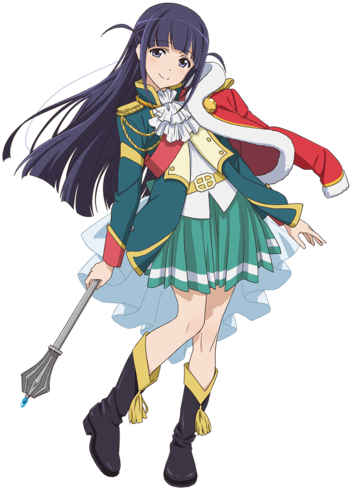 Portrayed by: Haruki Iwata (Japanese), Maggie Flecknoe (English)
"I adore the shining stage,
but...I love it even more when you shine.
In a duet that goes round and round,
I hope we can dance together, forever.
Student of the 99th Class, Mahiru Tsuyuzaki!
I was the one...who was always by your side."

A girl that is usually calm and shy but dances and sings with vigor on the stage. She has always admired the positivity and energy of her roommate, Karen. This admiration leads to complicated feelings when Karen's childhood friend returns.
Nana Daiba 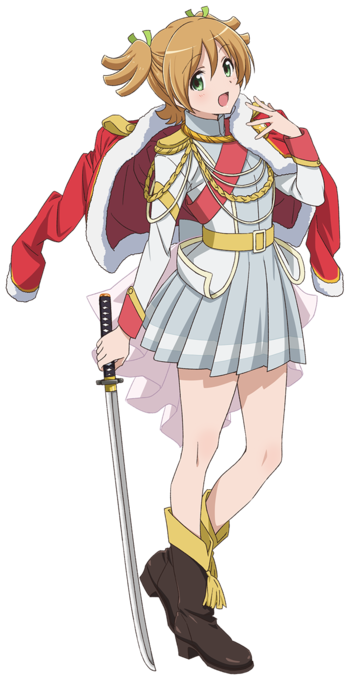 Portrayed by: Moeka Koizumi (Japanese), Luci Christian (English)
"The fruit has become ripened and heavy upon the stage...
But it remains tender, and someone must protect it all!
Student of the 99th Class, Nana Daiba!
I will protect them!
Forever...Again and again!"

The mother figure of the 99th graduating class who has an aura of gentleness surrounding her. Her nickname is Banana. She's not just skilled at dance and song, but also production as well.
Claudine Saijo 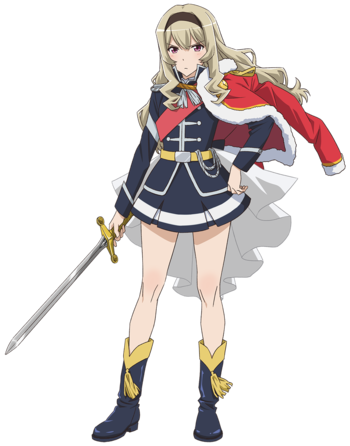 Portrayed by: Aina Aiba (Japanese), Christina Kelly (English)
"Everyone has an equal chance to shine...
So, through the dance of love,
I shall burn more passionately,
Soar on freedom's wings higher than anyone!
I am the second-ranked student of the 99th Class, Claudine Saijo!
C'est moi, la star! Translation  It is I, the star!"

A half-Japanese, half-French girl with a Japanese father and French mother. She's an extremely talented girl who has been acting on the stage since she was a child. She has considered the brightly-shining actress Maya her rival ever since meeting her.
Futaba Isurugi 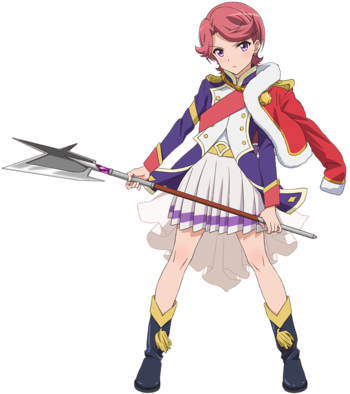 Portrayed by: Teru Ikuta (Japanese), Chelsea McCurdy (English)
"I found it that day.
A two-man performance on a stage where flowers dance.
From here on, no one else may enter.
A direct path with no holding back!
Student of the 99th Class, Futaba Isurugi!
I will dash forth with fighting spirit!"

Kaoruko's childhood friend who enrolled as a student at Seisho Music Academy because she did. She has a sharp tongue, but is actually very kind. Despite having a tendency to complain, she always puts Kaoruko's wellbeing first.
Kaoruko Hanayagi

Portrayed by: Ayasa Itō (Japanese), Savanna Menzel (English)
"Dancing and singing back and forth,
Fighting desperately day after day.
Crossing swords on stage once more.
The blooming of young blood at their best.
Student of the 99th Class, Kaoruko Hanayagi!
I'll have you follow me till the very end!"

The granddaughter of a master of Japanese dance with extraordinary skills in song and dance. A high-class lady, she relies on Futaba to serve as her hand and foot. She always has a gentle smile on her face, but is actually very calculating.

A student of Seisho's Class B Stage Production Department under the Play Creator Program. She is the main playwrite for the 99th Class's production of Starlight and is also one of those overseeing the production of the Arcana Arcadia play in -Re LIVE-.
Kiriko Masai

A student of Seisho's Class B Stage Production Department under the Play Creator Program. She is the director of the 99th Class's production of Starlight and is one of those in charge of overseeing the production of the Arcana Arcadia play in -Re LIVE-.

A new student from Seisho's 101st Class studying under its Stage Production Department introduced in the spin-off play, Blue Glitter. She is the younger sister of Seiran's Koharu Yanagi.