This is the character page for all of the Gods who made an appearance through the Visual Novels and Dies Irae Pantheon.

Long before the beginning of the series, an advanced and futuristic civilization proceed to create the Throne, an Ancient Artifact whose power is to spread the wish and desire (named "Law") of any character who reached hegemonic godhood. Since then, several people were able to use it, be it an altruistic goal (like Tasogare), selfish goal (like Hajun), or in-between. However, There Can Be Only One since the various wishes of the gods often clash with each other, meaning the only way to access the Throne is to kill the current Hegemony God.

A group of five warriors from the time before the Throne's existence. They were close friends of Mithra, the First Heaven, and one of which, Varuna, was her lover. After Mithra ascended to godhood they allowed their own consciousness to merge with the Throne, effectively becoming the will of the Throne itself. While those that make up the group has never appeared, they are still making their presence known with the numerous Sensories of Varuna known as Observers. Sensories whose appearance signals the end of the current era.

Eventually it is revealed that things surrounding this entity are a lot more complicated, the warriors simply took on the name of a mysterious being located at the Origin Coordinate after having come into contact with it, seemingly having gone insane from having been in it's presence. The whole system of the Throne was as a result conceived to suppress it, lest risking it swallowing everything. 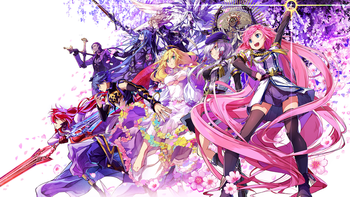 The Gods of Shinza Bansho 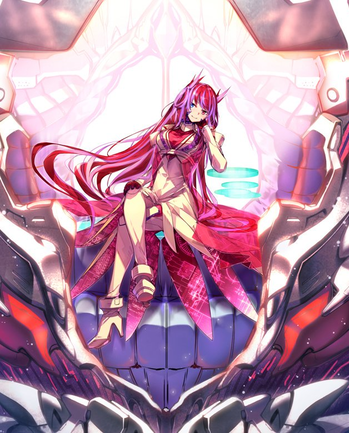 The very first Hegemony God in the Throne archive. A cynical woman that ruled the universe in a dystopic way, believing herself to be the only true righteousness. 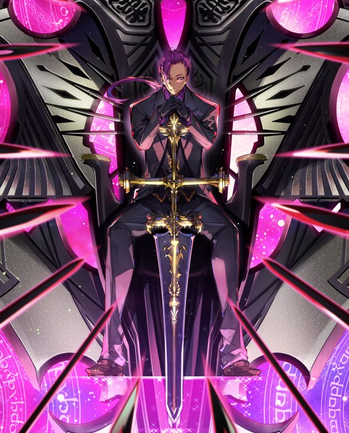 Denying Evil
"My heirs - those who are born in my Paradise of the Fallen. Feel no shame nor regret. Feel no remorse for your evil deeds. Live in embrace of sin and punishment. Such is the nature of man."
Voiced by: Kentaro Ito

The Second Heaven and the obsessive man that killed Mithra, believing that in order to overcome evil, one must become an even greater evil. Believing the good side to be the inferior side, where he needed to become an evil that surpassed all other evil, he revered himself as the "greatest evil", ruling over all other evils. He enacted genocide on the First Heaven, slaughtering literally every living being personally. His followers are the Seven Demon Lords with their household and Vahman Yasht.

For info on him in Avesta of Black and White, see here. 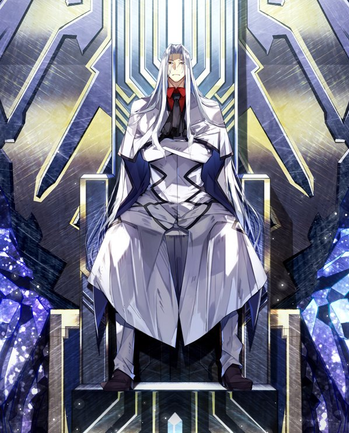 Sinless God
"Every evil comes from ignorance. Because you don't understand that you had acted foolishly. If so, share everything you know with everyone else. There is no difference between you and others. One is all. All is one. Bend yourself like the pure white of salt."
Voiced by: Kazuyuki Okitsu

The third holder of the Throne. A genius scientist that was described as "too pure", going far enough to say he was a man that "looked exactly like God would". Being an arrogant man that lived only for perfections, not accepting any imperfections, he continually strived to help the world getting rid of all sin.

His followers are the Grigori, the Great Sinners and Shamash. 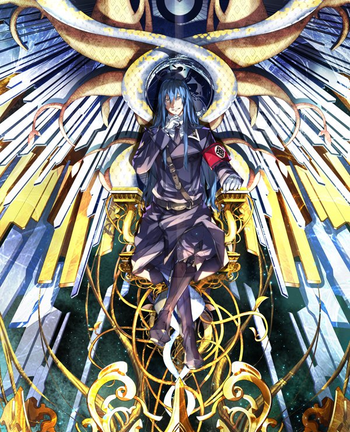 Living Paradox
"The only thing that I want is to meet you again. You who I loved. Therefore dance, my performers. The universe is but a comedy written by me. Please guide me to the supreme ending."
Voiced by: Kosuke Toriumi

The fourth holder of the Throne, a God who has lived through countless years and timelines. He is obsessed with Marie and finding the unknown, and will not be satisfied with death until he finds it in Marie's arms or at the hands of a factor beyond his ken. At the end of his reign he gave the Throne to Marie and became one of her guardians in her route in Dies Irae. It's revealed in its sequel Kajiri Kamui Kagura he died along with Reinhard when Marie was killed by Hajun, ending her Law.

His followers is a group known as Gomorrah.

For info on him during Dies Irae, see here. 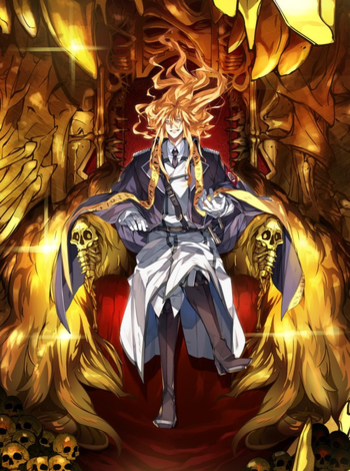 Eternal Struggle
"I love all and everything"
Voiced by: Junichi Suwabe

The Apoptosis of Mercurius, who ascended as Hegemony God together with Ren. He became one of the three guardians of the Fifth Heaven, Tasogare aka Marie, when he was defeated by Ren in her route in Dies Irae. It's revealed in its sequel Kajiri Kamui Kagura he died along with Mercurius when Marie was killed by Hajun, ending her Law.

His followers are comprised of members from the Longinus Dreizehn Orden.

For info on him during Dies Irae, see here. 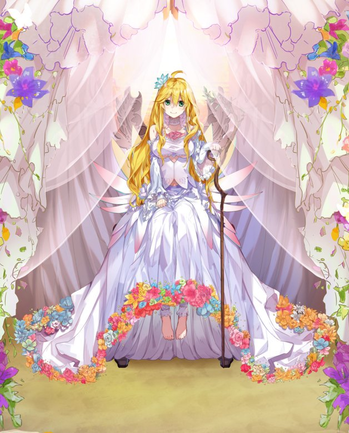 Omnibenevolent Goddess
"I will hold everyone in my embrace. Let us watch over the birth of every new life for all eternity."
Voiced by: Yui Sakakibara

Fifth Holder of the Throne. Marie was the love interest of Ren Fujii (later known as Yato in Kajiri Kamui Kagura) and was able to unite the other Hegemony Gods under her rule, with her Law allowing them to coexist. However, thousands of years later, an insane monk who would be known as Hajun proceeded to kill her, effectively ending her Law and taking over during the events of Kajiri Kamui Kagura.

Her followers are the various reincarnations of the Longinus Dreizehn Orden members.

For info on her during Dies Irae, see here. 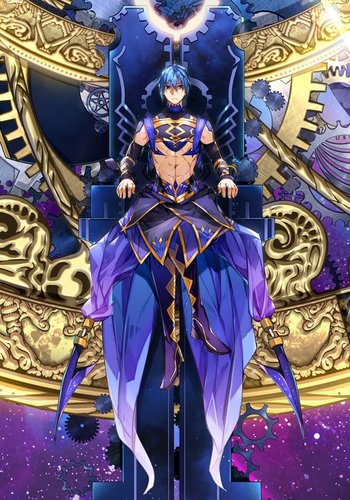 Eternal Stasis
"If only time could just stop."
Voiced by: Kosuke Toriumi

An artificial lifeform created by Mercurius to facilitate the growth of Marie as a God. Ren was the love interest of Marie and after defeating Reinhard in her route he became one of her guardians until Marie was killed by Hajun. During the latter's reign, he survived as Tenma Yato, opposing his emanation for 8000 years until the Eastern Expedition killed him as a part of his plan to defeat Hajun.

His followers are comprised of the Yatsukahagi and the Eastern Expedition.

Sixth Heaven, The Evil One 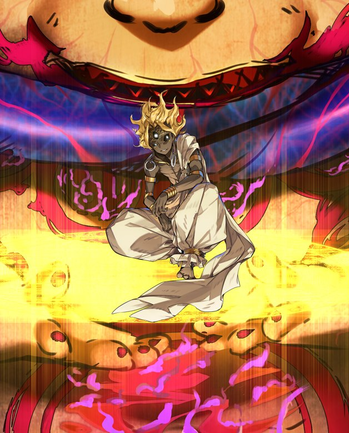 The Greatest Egotist
"There is no need for undulation, flatland is more preferable. There needs to be only one color, for there is no need to mix with others. I only desire infallible peace, completed whole all by myself."
Voiced by: Eiji Miyashita
The sixth holder of the Throne, an insane monk that hated everyone and wished to be alone, he ascended to the Throne by killing Marie.

His followers are the cultists Sansara Vartin, led by Sahasrara and Suvaha. 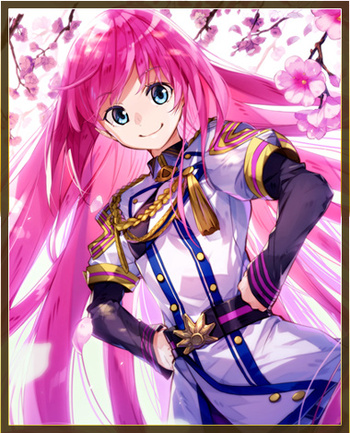 The Tumor inside of Hajun and the source of Hajuns ever rising power. Being originally the twin brother of Hajun, he would attached himself to Hajun as "The Tumor", living as a separate entity apart of Hajun. After releasing the Tumor from Hajun’s body and defeating him once and for all, Rindou and Habaki decided use him to spread their own law to fill vacancy of the Throne. Using the desire “We don’t want give birth to barren things”, Sun that illuminates everything, born from union of Izanagi and Izanami, respecting diverse values of people and giving them choice in the afterlife. As of Pantheon, Amaterasu now appears as a young girl called Hirume, who Habaki and Rindou treat as their daughter.