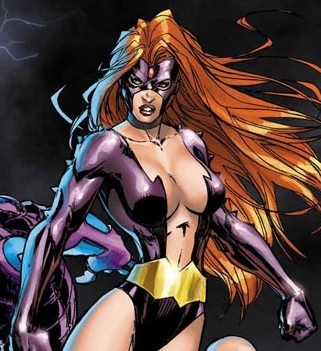 A long-time rival of She-Hulk and wife of the Absorbing Man. 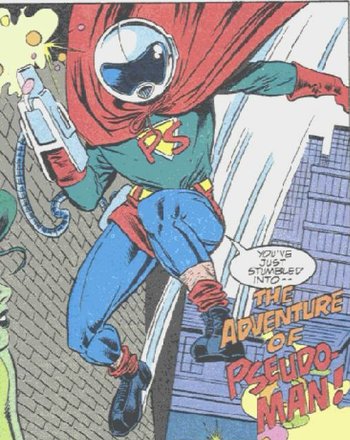 Clark Finark was a candidate for a Midwest congressional seat who hired Pseudonix Incorporated to manage his advertising campaign. Finark's political aspirations were sunk when his opponent discovered that his birth certificate stated he was from the planet Veegwal, a non-existent planet his parents had listed as his place of birth due to being high on drugs. Finark blamed Lexing Loopner, the head of Pseudonix Incorporated, for the downfall of his political career and for contributing to society's obsession with media sensationalism and image branding. He stole Loopner's Pseudonix technology and used it to terrorize the city, necessitating She-Hulk to stop him. 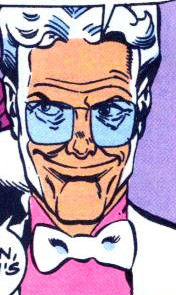 Jasper Keaton was an old acquaintance of She-Hulk's friend Louise Mason and once worked for her father Senator Grant as his aide. He is the owner of a savings and loan company and the founder of the American Purity Foundation. When his company was in danger of being seized by the government, Keaton offered to find "Rosebud", a bomb that had been stolen in the 1940s, for a few senators in exchange for them letting him keep control of his company. In order to find the bomb, Keaton had Louise's home burglarized and then had her abducted. She-Hulk had to team up with Louise's daughter Wanda in order to save Louise and stop Keaton's plan. 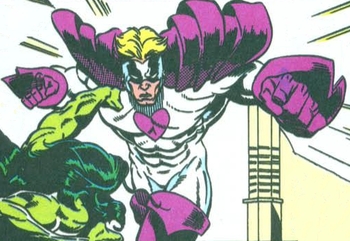 Once an employee of Jasper Keaton's savings and loan company, Bob Jones IV underwent a genetics research experiment which granted him superpowers. He serves as the superhero mascot of the American Purity Foundation and is Jasper Keaton's right-hand man in his schemes. 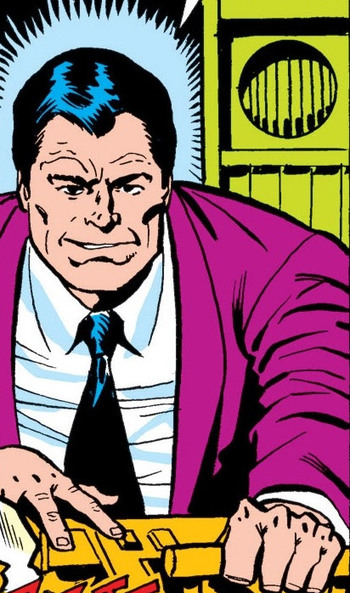 The ruthless mobster who Jennifer Walters was prosecuting before becoming She-Hulk. His hit attempt on Walters indirectly created the She-Hulk.
Abominatrix 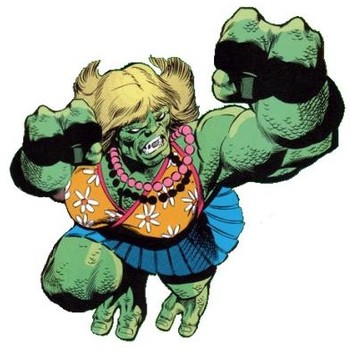 Before she became Abominatrix, Florence Sharples worked for Jasper Keaton's savings and loan company as a manager. She was chosen as a medical test subject for a cure for premenstrual syndrome (PMS) using gamma rays. Instead, the treatment changed Sharples into the Abominatrix, a gamma mutate with perpetual PMS.
Advertisement:
Spragg 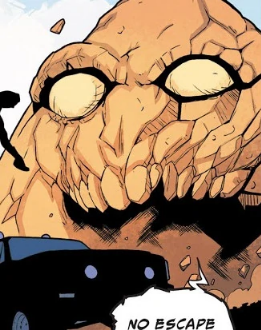 Spragg belongs to a race of alien spores which were pulled into Earth and evolved into sentient hills. While the rest of his kind prefer to live in peace, Spragg seeks to conquer all of Earth. His first attempt at world domination was foiled by the geologist Professor Bob Robertson. He turned two decades later necessitating She-Hulk to team up with Robertson and the Mole Man to stop him. 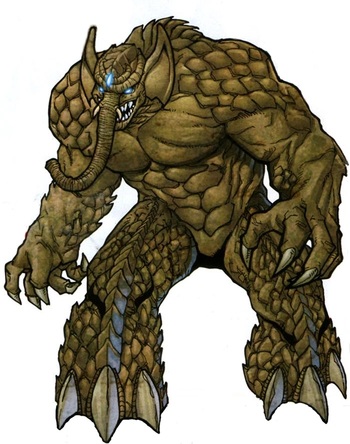 Manfred Ellsworth Haller was once a promising hydraulic engineer and generous philanthropist. As the founder of Haller Hydraulics, he designed and developed a suit of exoskeleton armor to enable explorers to survive hostile environments and allow rescue personnel to traverse hazardous terrain.

Adrian Lynn was a paraplegic who took an experimental drug that enhanced activities in her adrenal gland. After overdosing, because the effects only lasted 30 minutes, she became an amazon type beast called Adrenazon. 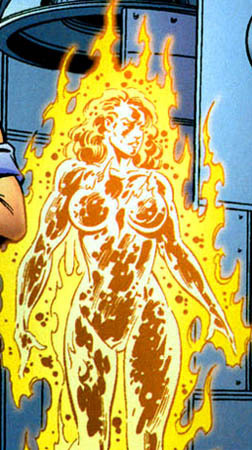 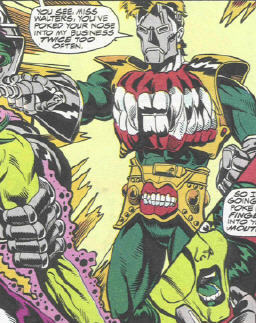 Dr. Robert "Bob" Doom is the fifth cousin of the infamous Victor von Doom whose family emigrated to the USA. Jealous of his cousin's power and wealth, Robert sought to take control of the tri-state area. To that end, he used mind-controlling dental implants in the teeth wealthy patients and had them sign over their estates to. She-Hulk became aware of his plans when one of his patients, Packard Stanford, discovered a malfunctioning implant in his tooth and asked She-Hulk to file a lawsuit against him. 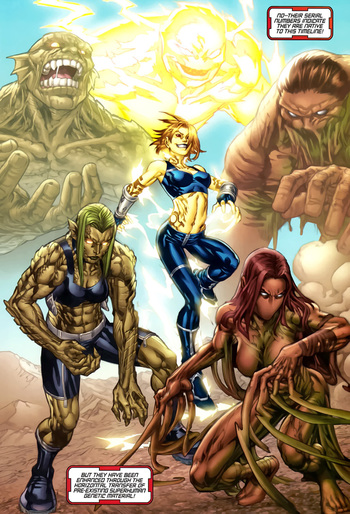 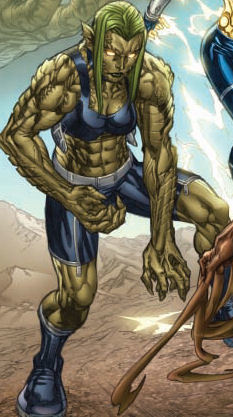 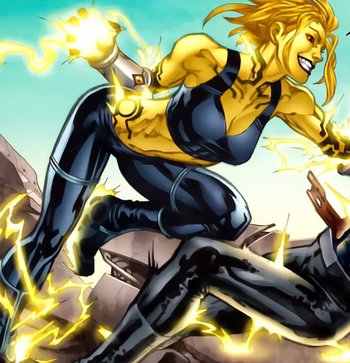 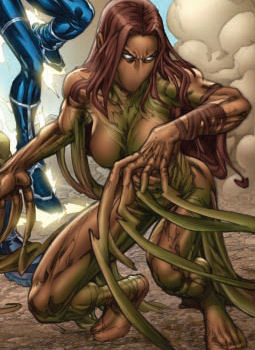 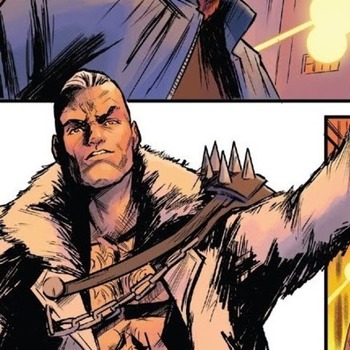 Mahkizmo was ruler of Machus, a warlike alternate future Earth where women are enslaved by men until he was defeated by the Thing and Thundra.

The second Living Eraser hails from Dimension Z, an alternate dimension inhabited by green-skinned humanoids. The denizens of Dimension Z had never developed atomic power of their own and kept trying to find ways to bring it to their dimension which also included kidnapping Earth scientists. After this plan failed, they tried simply stealing nuclear weapons but the process of interdimensional travel neutralized radioactivity. The second Living Eraser came up with the idea of kidnapping humans who had become irradiated. His target: the She-Hulk.

James David made a name for himself in the 1950s and 60s by playing a character known as the Rumbler in films. He crossed paths with Jennifer's father Morris when the sheriff arrested for running over someone while driving under the influence. Released on bail, James died when he fell into a crevasse caused by an earthquake.

Or so it seemed until he resurfaced several decades later the power to control earth and desire for revenge against Morris Walters.