"Family is what it can be, not what it should be."
— The Wizard
open/close all folders
As a Whole

Chosen by the wizard Shazam, the Marvel Family (or Shazam Family, or Shazamily) are empowered by six ancient gods and heroes, possessing the wisdom of Solomon, the strength of Hercules, the stamina of Atlas, the power of Zeus, the courage of Achilles, and the speed of Mercury. 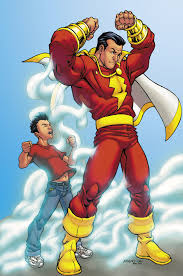 The World's Mightiest Mortal himself, Captain Marvel is one of Earth's most powerful heroes. Clad in his red uniform and white-and-gold cape, Cap stands as a symbol of courage, strength, and kindness. What few know, however, is that he is in fact Billy Batson, a young orphan empowered by the great wizard Shazam to be his champion. Whenever he speaks the wizard's name—"SHAZAM!"—Billy is transformed into the mighty Captain Marvel!

Billy's parents, famous archaeologists, were murdered by Theo Adam. After spending most of his childhood penniless and alone on the streets of Fawcett City, Shazam helped Billy find his long-lost twin sister, Mary, with whom he shared some of his vast power; he was then adopted by Mary's surrogate parents, the Bromfields. When not fighting evil as Captain Marvel, Billy is a schoolboy who moonlights as a novelty DJ for Whiz Radio.

After Shazam was killed during the Infinite Crisis, Captain Marvel gained his power as the new wizard, Marvel. This was short-lived, as Shazam was resurrected a couple years later. Due to mistakes Billy, his sister, and Black Adam made in the wizard's absence, Billy is currently powerless, but the time will surely come when he regains his power as Captain Marvel once again.

However, reality was reset before the Marvels could regain their powers. This resulted in some major changes to Billy's personalities in both identities. Billy was still mostly a good kid, but he was now a very troubled foster child and he wanted to grow up as fast as possible so that no one would have to take care of him. His superheroic codename was also changed to "Shazam", and his powers were now far more connected to his magical nature.

Billy also appears in Jeff Smith's Monster Society of Evil and its followup Billy Batson and the Power of Shazam. In both he is much the same character as he was in the Golden Age and the 90s series The Power of Shazam. 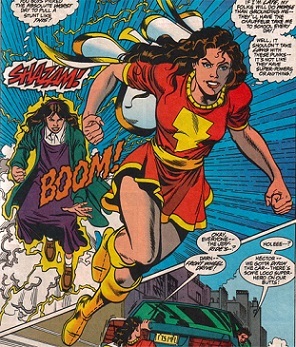 Captain Marvel's twin sister. While Billy was consigned to poverty after their parents died, Mary was taken in by a kindly rich couple, the Bromfields. When the siblings became teenagers, they met by chance when Mary entered a contest emceed by Billy. When Billy was captured by a gang of thugs, Mary was granted the powers of Shazam and saved her brother, transforming into an adult version of herself. They were reunited at last and the Marvel Family was born.

When Shazam died, Mary lost her powers, leading her on a quest to regain them. After gaining the powers of Black Adam, she fell victim to the silver tongue of the demon Eclipso, who brought her to the evil god Darkseid. Darkseid brainwashed Mary and his minion, Desaad, possessed her. After using Mary's body to fight the heroes of Earth, Desaad was cast out when Freddy Freeman used Shazam's power to exorcise him. She is currently powerless, her corruption by Darkseid having proven her unworthy to the resurrected Shazam; whether this would have changed was not seen by the time of the reboot.

An alternate version of Mary appears in Jeff Smith's Monster Society of Evil. This version is a ten year old girl who is accidentally granted her powers when Billy transforms into Captain Marvel at too close a range; unlike him, she remains ten when she invokes the power of Shazam.

Another alternate version of Mary exists in the DC Comics Bombshells universe. Miriam "Miri" Marvel. She is the only person with the "Power of SHAZAM!" in this continuity. SHAZAM in this case is the initials of a half dozen Jewish heroines. 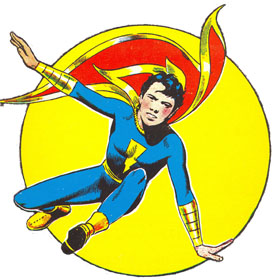 A friend of Billy Batson's who was crippled by Captain Nazi in both Pre-Crisis and Post-Crisis continuity, Freddy Freeman was granted a portion of Billy and Mary's powers in order to help him walk again. When he says "Captain Marvel" he is transformed into a physically perfect version of himself, with a portion of Captain Marvel's powers, with a strikingly distinctive yellow on blue (with a red cape) variation of the Marvel costume. He's had issues with Billy at various points, most notably due to his own interest in Mary and Billy's insistence on protecting his sister.

During the Trials of Shazam series (when Billy had ascended to become the Wizard Marvel), he became the superhero Shazam, wearing a costume identical to Captain Marvel's, but with his own face and somewhat longer hair.

In the New 52, he's redesigned more radically still, gaining blond hair as well as using a pair of crutches rather than his usual single one as Freddy and aging into an adult in superpowered form as "King Shazam". The first two of those changes were reversed for the movie.

Shazam I / The Old Wizard / The Champion
AKA: Jebediah of Canaan 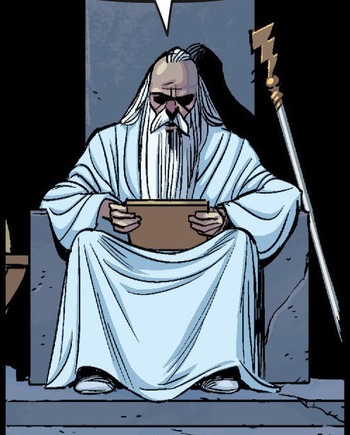 The former wielder of Captain Marvel's powers, Shazam is the wizard who granted Billy Batson his powers. 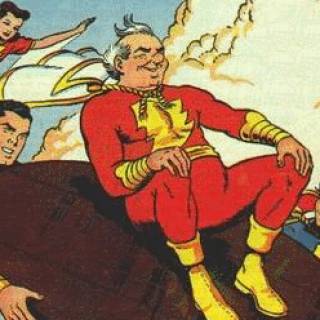 A gray-haired man who decided he wanted to be part of the Marvel Family, made up a suit, and...the kids just kind of humor him and play along. As founder and president of Shazam, Inc. he is one of the few characters, almost certainly the only one in the Golden Age, to successfully monetize superheroism in-universe. 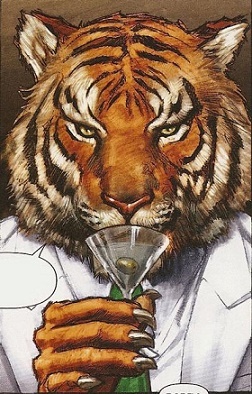 A talking tiger. Originally a big cat in a remote Indian village who received a formula from an inventor hermit that allowed him to walk, speak, and think like a man; other continuities have since revised his origin, making him Mary's doll animated by magic, or a mystical guardian spirit that can take the form of both man and beast. In 2018 incarnation he is a resident of the Wildlands, which are populated by anthropomorphic animals. 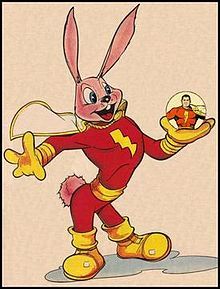 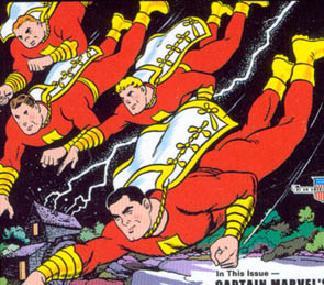 Three young boys from across the United States who just happened to share the same name as Billy "Captain Marvel" Batson—"Tall" Billy from Texas, "Fat" Billy from Brooklyn, and "Hill" Billy from down south. Travelling to Fawcett City to meet the famous kid radio star, the four formed the "Billy Batson Club". When the quartet were kidnapped by Doctor Sivana, Billy gave the other three the ability to transform into the Lieutenant Marvels by saying "Shazam". Afterwards, the three became members of the Marvel Family, aiding the Big Red Cheese on a part-time basis.

The three Lieutenant Marvels were erased from history by the Crisis on Infinite Earths (though post-Crisis versions of them were briefly seen in Trials of Shazam!, only to immediately lose their powers). 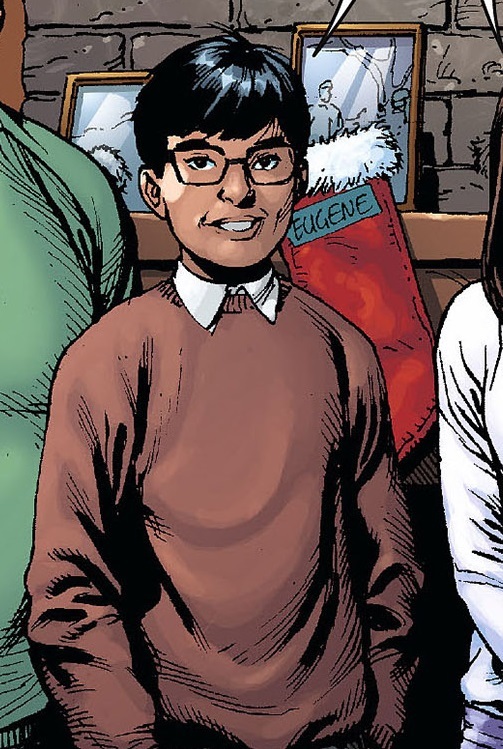 Making an appearance both in Flashpoint and New 52, Eugene is an orphan child who makes up the brains of the whole marvel family. Sporting an Asian theme and being a total brainiac he inherits the wisdom of Solomon as a part of Captain Thunder. 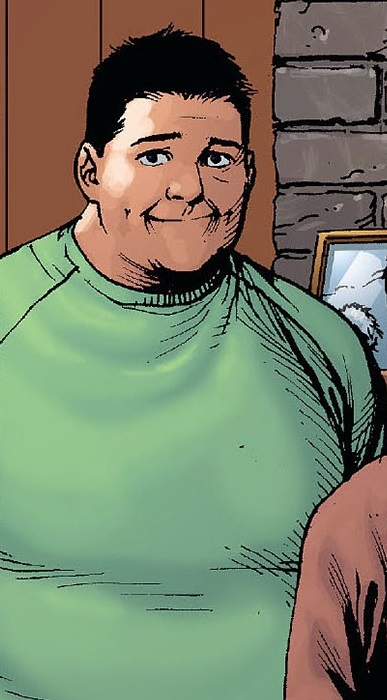 An unassuming gentle giant of Latino descent within a family of orphans and resident fat kid at Fawcett High School. Pedro assumes the Strength of Hercules when the marvel family comprise Captain Thunder in Flashpoint verse. 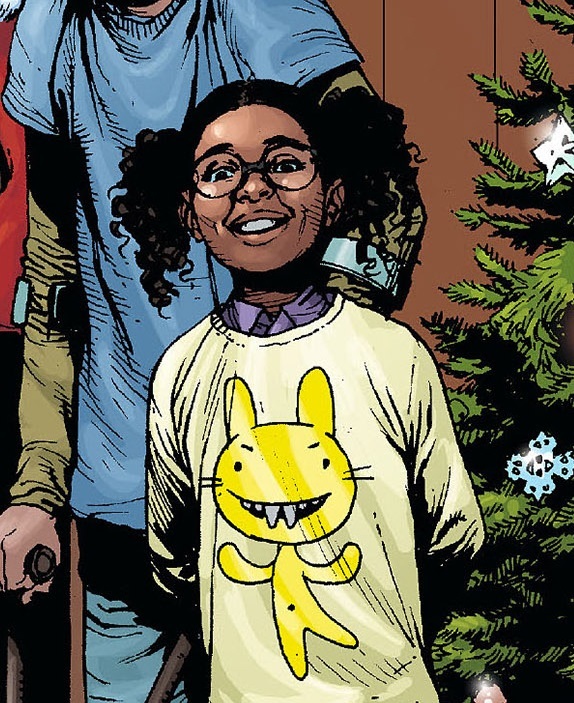 A young African-American girl who supports the Speed of Mercury for her Captain Thunder persona, she is the youngest and most bubbly sort within the family acting as the goofy yet lovable and hyperactive sibling within the marvel family. 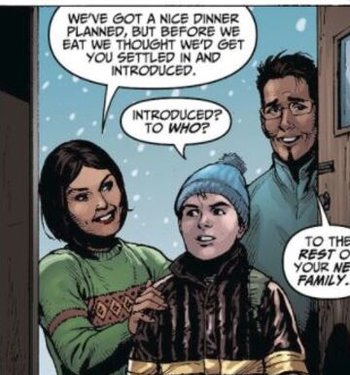 The foster parents of Billy and the rest of his foster siblings. 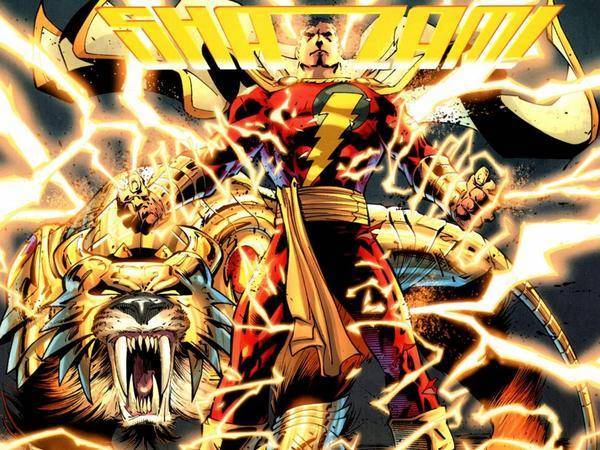 Before introducing Captain Marvel to the main DC Universe, DC introduced this expy as an ally/foe of Superman, appearing in Superman #276 in 1974. Willie Fawcett inherited his power from a Mohegan medicine man named Merokee, who then gifted him with a thunderbolt emblazoned belt buckle and the powers of various animals and natural forces. When he rubs the belt buckle and says the word "Thunder!", he transforms into Captain Thunder. Willie eventually went on to become the protector of his dimension of Earth-276 (named after his first comic appearance).

The Captain Thunder of the broken Flashpoint universe came to be when six orphan kids (Billy, Mary, Freddy, and three others) got on the same train at the same time, transporting them all to the mystical rock of eternity where the Wizard Shazam sat waiting for them Unable to give sole ownership of the power to just one child, Shazam divided the individual powers of their Superpowered Alter Ego to each of the six street urchins giving them a letter corresponding to the different attribute. 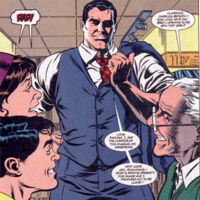 The father of Billy Batson (and in some stories of Mary Batson too).

A member of the Legion of Superheroes who wields the power of Shazam and has an elderly Billy Batson as her mentor.