A painfully shy and insecure sixteen-year-old girl who used to get bullied at school before she awoke in the post-apocalyptic world. In her old life, her pet cat "Macadamia Nuts" was her only friend.

A kind and considerate seventeen-year-old who protects Natsu from Semimaru's bullying. The most important person in his life is his girlfriend Hana and he hopes to find her alive in the post-apocalyptic world. He's an excellent swimmer.

A rude and selfish eighteen-year-old deliquent with a bad homelife. He loves to pick on Natsu.

She's the guide of Team Summer B and has an outspoken and confident personality. In the past she was a policewoman.

A cheerful sixteen-year-old girl who ran away from home.

An excentric artist who paints at every opportunity.

A sweet little girl who used to work at a temple as a seer.

A mysterious person who keeps his distance from the rest of Team Summer B and periodically disappears from the group.

She's very outspoken and won't turn a blind eye to any injustice. Arashi is her boyfriend.

A young girl who remains asleep for some time after the others awaken from cryostasis.
Chisa Taiami

The guide of Team Spring. He used to work for the Japanese Self-Defense Force before that and is very authoritarian and sexist. 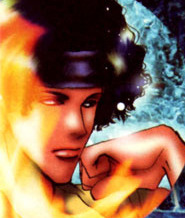 One of the three team members who died due to Cryonics Failure. Her picture shows her in a lab, holding a test tube.

One of the three team members who died due to Cryonics Failure. Her picture shows her working at a sewing machine.

One of the three team members who died due to Cryonics Failure. His picture shows him harvesting apples. 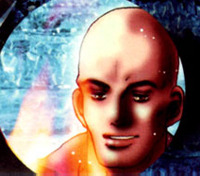 A ventriloquist in a small club that gets scouted by Takashi to perform as the opening act to Miki Mari's concert for the Ryugu Shelter's trip's last day. The events of the Ryugu Shelter are mostly told from his point of view.

A popular idol singer who was scouted by Takashi to perform a concert on the last day of the Ryugu Shelter's trip.

The man that scouts most of the people that work behind the scenes in the Ryugu Shelter, who also had a big role in the creation of the 7 Seeds project. He's Hana's father and one of the former teachers of Team Summer A.

Takashi's wife that works in the inventory of the Ryugu Shelter and she's Hana's mother. 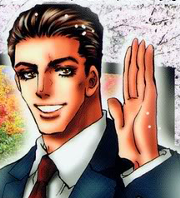 A failed actor that was scouted to play the role of the figurehead and Director of the Ryugu Shelter. 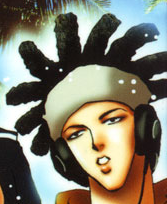 A well-known broadcaster and musician who has previously worked with Maria and was scouted by Takashi to take over broadcasting duties for the Ryugu Shelter.

A go-to guy for visual projections, Saruwatari was hired by Takashi to take care of the broadcasting duties in the shelter.

A well-known mangaka and creator of the in-game manga series Wonderful Q. He gets invited to the Ryugu Shelter and continues his work on Wonderful Q while there.

One of the many Team Summer A candidates, Shigeru was always lagging behind the others and Ango helped him keep up. As they got older, his relationship with Ango soured mildly.

During the Final Test, Shigeru was helped by Ango and got frustrated, choosing to go separate ways. When he saw Ukai shoving Ango down a deep hole, Shigeru went after him and the two tried to climb their way out to safety.

The rope keeping both aloft fell and Shigeru chose to cut himself loose to save Ango.

One of the Team Summer A candidates, though he doesn't appear important until the Final Test. During the test, he gets angry when Ango refuses to share supplies with him and citing the first come, first serve idea. He heads into an old mineshaft with Koruri and others and gains a gun, with which he plans to kill Ango.

When his right eye gets slashed out, his mind starts going and he becomes consumed with the idea of getting revenge on Ango, on whom he blames the mineshaft catastrophe and his disfigurement. He uses Shigeru's good nature to lure Ango into a trap and then tries to kill Shigeru. Ukai gets lost and is last shown slowly freezing to death.

The rest of the candidates that were competing for a spot as one of the seven members of Team Summer A. They started off far greater in number, but many have dropped out of the program over the years. During the Final Test, all but the chosen seven members died.