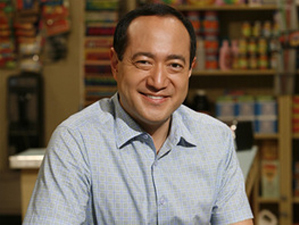 The current owner of Hooper's store.

The female owner of the Sesame Street day care centre at Around the Corner and Gordon's cousin.

An energetic young Puerto Rican writer. Always interested in trying new things and encouraging his Muppet friends to be true to themselves. Mando also loves technology.

Character who appears in the final segment of a series of counting shorts, unofficially named by fans as the "Baker Films." The Baker is a hapless individual who, after proclaiming (to trumpet fanfare) that he has a number of baked goods in his arms, attempts to walk down a short flight of steps, but ultimately he trips and spills everything, making a huge mess.

An unassuming, low-key music teacher who lives in the apartment above Hooper's Store.

A teenager who was a student in Gordon's science class. In 1995, he started working at Hooper's Store.

A very empathetic dance instructor who taught many different forms of dance.

Gordon's nephew who came to Sesame Street looking for a job, and took one at Hooper's Store, to pay for college.

One of the original human cast members of Sesame Street. He took over Hooper's Store after Mr. Hooper's death in 1983.

Maria and Luis' daughter and a close friend to Gordon and Susan's son Miles.

She started out as an assistant at Hooper's Store during The '80s. A lot has changed since then, and now she's a veterinarian.

A father figure to the Muppets and kids on the street, and the de facto leader when things go wrong.

A retired firefighter and the owner of Hooper's Store between David and Alan.

A Japanese-American artist and vet on Sesame Street.

A grandfather figure to those around him, and the original owner of Hooper's Store.

A park ranger of the Sesame Street park.

A young Indian-American who owned and operated the laundromat.

A smocked painter who paints a given digit or two-digit numeral wherever he wants to. His character appeared in a series of 10 segments teaching number shape recognition, and would air for more than 20 years; Benedict's co-stars in these shorts were Stockard Channing and Jerome Raphael.

A Chicano who runs the Fix-It Shop with his wife, Maria.

Maria worked as Luis' employee before settling down, marrying him, and having a daughter, Gabriela.

In the mid eighties Susan and Gordon adopted a son. Miles went from being a younger sibling type character to being an older brother figure to the Muppet characters. Miles had a close friendship with Maria and Luis' daughter, Gabi.

A fruit vendor at the arch next to Hooper's Store.

A bilingual Latina who is a college student who now owns the bicycle shop (formerly owned by Luis) and also works at the laundromat (formerly operated by Leela).

Gordon's sister and a professional photographer.

A young male friend of Gina's and a famous dancer.

A one shot character who made her sole appearance in the 2013 special entitled "Little Children,Big Challenges:Incareration".

Gordon's wife and, as such, a maternal figure to those around her.