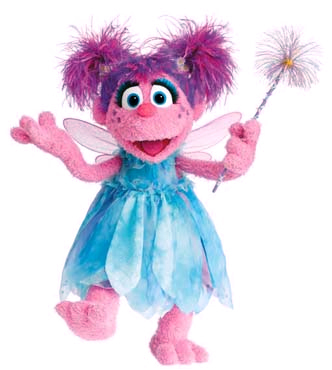 A fairy who moved to Sesame Street during season 37. She's a 3-year-old fairy in training, who attends the Flying Fairy School.(as of Season 40.) 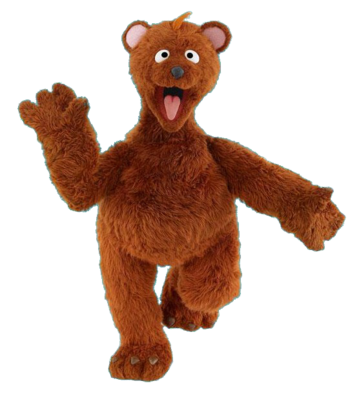 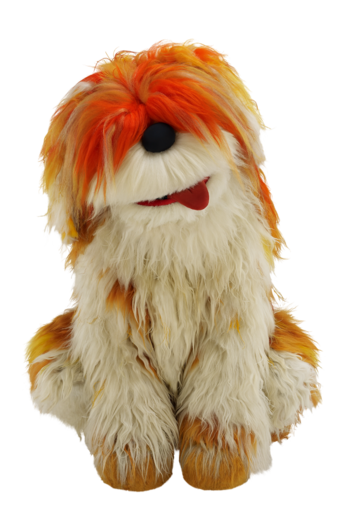 This large, playful Muppet dog is Linda's pet, who understands American Sign Language. When he debuted in Season 9, he was known as Woof Woof. In Season 10, he became Barkley after one episode dealt with changing his name by popular vote. By the start of the new millennium, Barkley hasn't appeared as often, but has been seen a couple times in recent years. 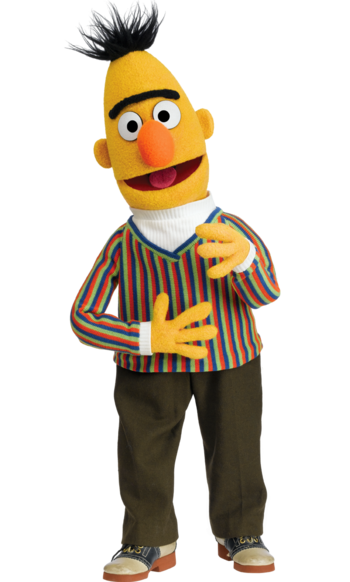 Long-suffering roommate and Blue Oni to Ernie's Red Oni. Bert would generally prefer to be left alone with a book than put up with his friend's shenanigans. He also really likes pigeons and oatmeal. 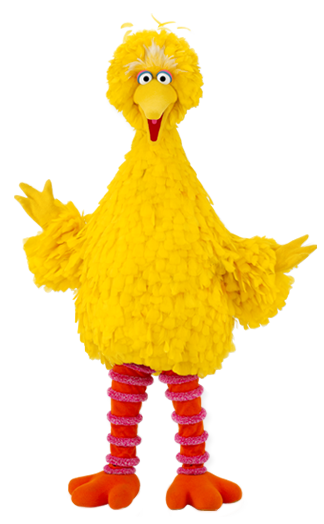 An inexplicably large, yellow bird, perpetually stuck at age 6. Mr. Snuffleupagus is his best friend. He lives in a nest near the apartments.

International adaptations of the show feature alternate equivalents of the character, who are apparently Big Bird's cousins, including Pino from Sesamstraat and Abelardo from Plaza Sésamo.

He is a comic book superhero character created by Big Bird.

He is Bert's Nephew. He appeared in the sketch where Bert is giving his nephew a bath. But Ernie told Bert that he cannot go into the bathtub with bath toys. He fills up the toys into the tub until gets furious and scolded to Ernie that he cannot give Brad a bath with too much toys.

A Garbage man who carries Oscar the Grouch's trashcan.

He is a black a sheep detective who solves the crime of the Fairy Tale / Mother Goose stories.

Two famous monkey duos that appeared on Sesame Street in the 80's and 90's. 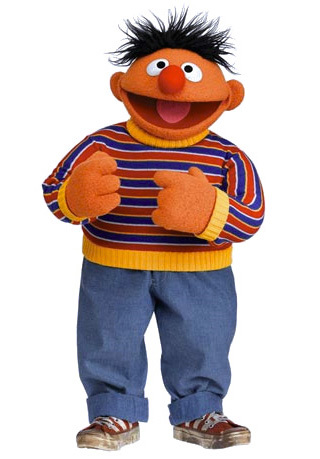 An enthusiastic, extroverted prankster who's Bert's roommate and Red to Bert's Blue. He enjoys taking baths with his rubber duckie.

She is a ursine writer bear.

The girl from "Goldilocks and the Three Bears". She and Baby Bear are friends, but Baby Bear finds her annoying.

She is Big Bird's grandmother.

A group of crusty, monster-like creatures indigenous to Grouchland. 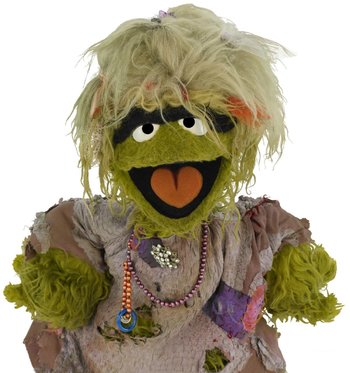 A Muppet who frequently visits the Furchester Hotel, but does not like it.

Two species of Muppet, one with a bicycle horn for a nose and the other with a table bell on top of its head, which they use instead of speaking. 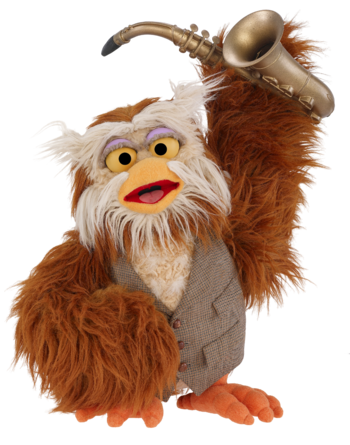 An old bluesman and sax player.

An egg from the famous nursery rhyme. He was interviewed Kermit on Sesame Street news. He later appeared on episode 3076 and had so many falls. 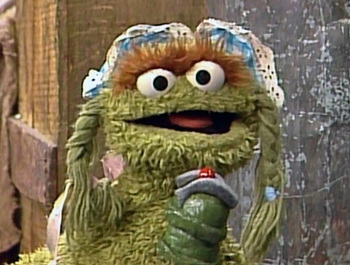 A small creature from the Furchester Hotel.

The VJ wolf who hosts The Sesame Street Rock and Roll Request Show. 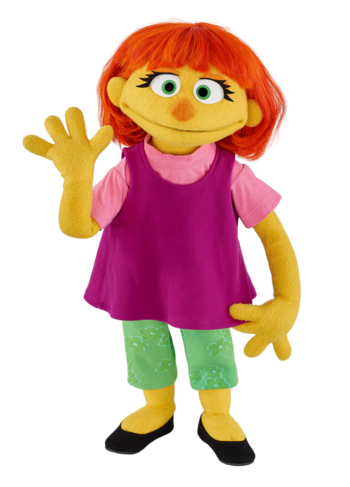 A little girl who has autism, an alternate neurology which some folk consider a disorder. Introduced in 2017 in the wake of increased diagnoses (1 in 68 children) of autism and autism-spectrum disorder conditions. 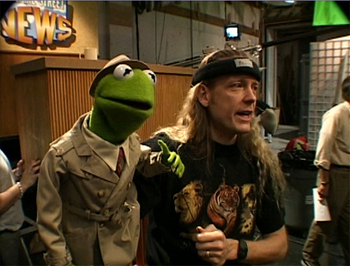 Jim Henson (1955-1990 [the character predates Sesame Street])
Steve Whitmire (1990-2009)note While 2009 was Kermit's last appearance on the show, Whitmire continued to perform him in other projects until his departure in 2017. The character is now performed by Matt Vogel.

The Muppet Show's easily flustered host; here Kermit usually plays a roving news reporter in a trench coat. He also often attempts to give lectures to the audience that are inevitably ruined by another character. Jim Henson's definitive role; Kermit and Ernie aren't that different, acoustically speaking. This is especially apparent in Bert and Ernie's Muppet Show guest appearance, where Ernie appears and speaks immediately after Kermit introduces the pair. See also his entry on Characters.The Muppet Show.

He is a bird salesman who was attempting to trade the drawing of Mr. Hooper by Big Bird for more Birdseeds. But Big Bird refuses to to do so. Because the drawing was a tribute to his death.

She lives on a tree in front of 123 Sesame Street, and was a little friend of Big Bird.

The parents of Baby Bear and Curly Bear.

A sheep who also happens to be an accomplished actress, she heads the Meryl Sheep School of Acting, and counts Susan Sarandon among her students.

Oscar's mother, and also the mother of his sister Bunny and brother Ernest.

The three singing pig trios who sang The New Way To Walk. 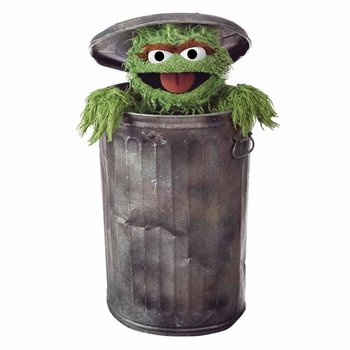 An irritable, antisocial Grouch who lives in a Bigger on the Inside trash can with his worm, Slimey, and his elephant Fluffy.

Murray's lamb sidekick, who speaks only in Spanish.—- 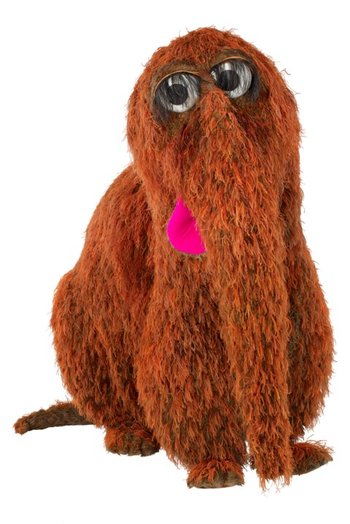 A slow-talking, elephantlike creature and Big Bird's best friend. He originally wasn't thought to be real, but was revealed in a Season 17 episode.

He is an opera singing Flamingo. He is introduced by Phil Harmonic. Proud of his talents and not averse to the sound of his own voice, he helped in the introduction of classical music to the series. He is cited, along with the 1957 Looney Tunes cartoon What's Opera, Doc?, as an effective and influential early introduction to the world of opera.

He is a postman rabbit who works at the Sesame Street Post Office.

One of the early characters on the show, SAM frequently claimed he was perfect, despite all evidence contrasting it .

He appears in the song Hello Sammy with singer Carol Channing and a group Letter Ss as chorus girls in a spoof of Hello, Dolly!.

He is a friendly but a slow moving turtle. 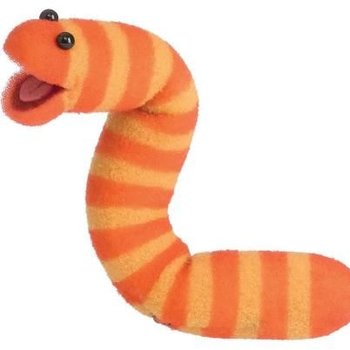 They are a trio of singing squirrels who sing various doo-wop songs.

He is Sherlock Hemlock's sidekick dog who appears in every Mysterious Theatre skit.

Sesame Street features a vast array of other Muppets ranging from animals, letters, and numbers to bathtubs and Singing Food.