open/close all folders
Sekiro / The Wolf 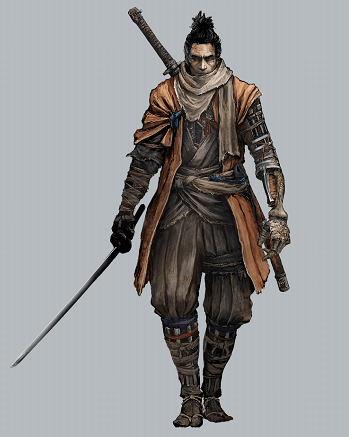 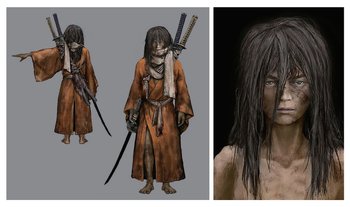 "The Mortal Blade. Without question... I accept its power."
"Do what must be done."
Voiced by: Daisuke Namikawa (Japanese), Noshir Dalal (English)

The Player Character and protagonist, Wolf is an older ninja bound to protect The Divine Heir, the last scion of an ancient bloodline. Ambushed while escorting his charge through a war-torn province, Wolf is attacked by a young samurai commander, costing him his left arm, his master's safety, and his honor. Waking up, and having found his arm replaced by a "ninja prosthetic", Wolf is told his master still lives, and that he still has the chance to redeem himself by preventing the samurai from sacrificing his liege to obtain immortality.

A purse almost overflowing with sen. It can be used to acquire the sen inside. Hefty enough to bring something resembling a grin to a Wolf's face. 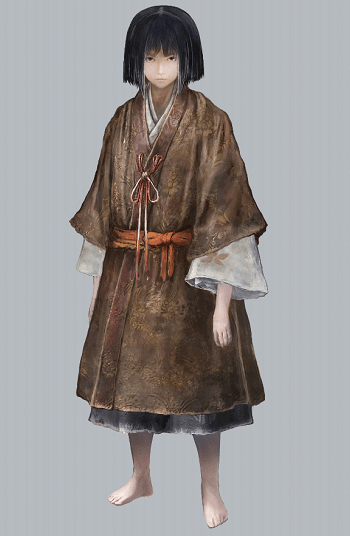 "Loyal Wolf: take my blood and live again."
"Even if you fall, uphold the oath to bring your master home. For you are my shinobi."
Voiced by: Miyuki Satou (Japanese), Amber Hood (English)

The Wolf's young master, the "Divine Heir", who was kidnapped by the Ashina clan to make use of his special bloodline. 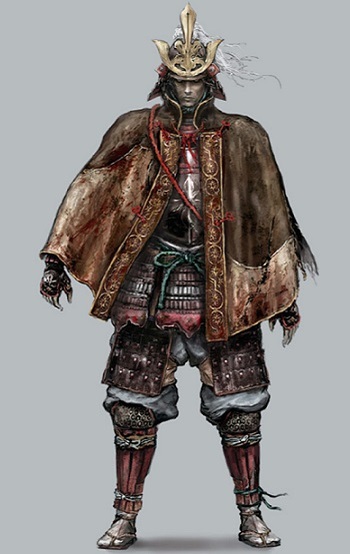 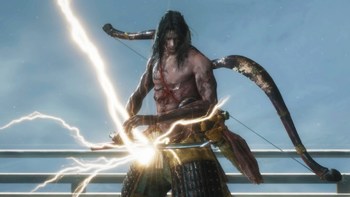 "So the noble shinobi stands in our way ..."
"Ashina, this land — is everything to me. For her sake... I will shed humanity itself."
Voiced by: Kenjiro Tsuda (Japanese), Ray Chase (English)

A battle-hardened Samurai, Genichiro Ashina is the highest-ranking commander of the Ashina clan's army. Out of desperation, Genichiro kidnaps Wolf's master, and leaves him for dead after defeating him in a duel. 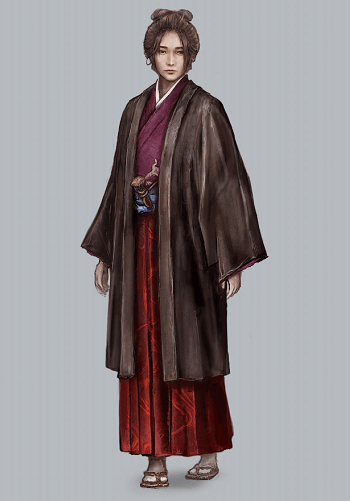 "Shinobi... Open your eyes. For the sake of your master..."
Voiced by: Shizuka Ito (Japanese), Stephanie Sheh (English)

A doctor for an unnamed feudal lord, Emma can upgrade Sekiro's Healing Gourd in exchange for Gourd Seeds. If requested, she can be sent to determine the cause behind the Dragonrot affliction. She may not seem like it, but she's quite a skilled swordswoman.