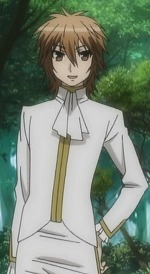 The Ashikabi of the South. A wealthy and spoiled teenager, he is known as a collector of Sekirei and aggressively pursues any target that catches his interest. While extremely cunning and ruthless, he is also very childish and treats the Sekirei Plan like a very exciting game rather than a serious life-and-death conflict. Because of this, he tends to stick to the rules and will step in to prevent others from cheating. 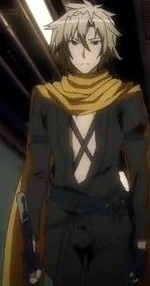 A reserved and serious swordsman, as well as one of the few male Sekirei. He is one of the founding members of the Disciplinary Squad, and now serves as the bodyguard for the Ashikabi of the South, Mikogami. More often than not, he serves as a voice of reason and attempts to keep his master out of harm's way, a duty that has thus far kept him out of battle. He is noted by his former allies as being a difficult person to get to know, but is deeply devoted to his young master and turns out to be surprisingly kind, even to his enemies. 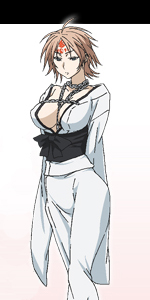 A Sekirei that was discarded, after her tuning failed. She is not considered officially part of the Sekirei Plan, but considers Mikogami her master after he took her in. Quiet and subdued, she often forgets to wear her underwear but is one of Mikogami's most trusted and powerful Sekirei alongside Mutsu.

One of Mikogami's many Sekirei, sent to capture #108. She is the first opponent that Musubi faces in the Sekirei Plan.

Two of Mikogami's Sekirei who are identical to each other in appearance and personality.

One of the Sekirei sent by Mikogami to hunt down other Sekirei for his collection. She makes failed attempts at capturing first Shiina, then later Homura.

She first appears during the 3rd Stage of the Sekirei Plan. 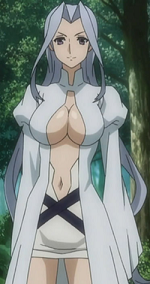 A cheerful and elegant Sekirei, with mist powers. She is one of Mikogami's Sekirei. 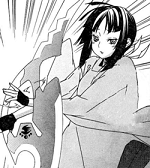 One of Mikogami's Sekirei, first appearing during the 3rd stage. She expresses sympathy for Hikari and Hibiki's difficult life, but proves to be quite violent and even slightly cruel in battle. She wields a special, double-sided blade as her weapon. 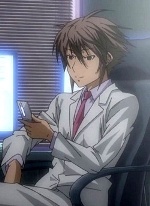 The Ashikabi of the East, and the head of a powerful pharmaceutical company. He is extremely ambitious, cunning, and ruthless to the point that he treats his own Sekirei as disposable tools. Using his influence, he blackmails Uzume into serving him and bribes other Ashikabi into serving him. He opposes the Sekirei Plan, and seeks to undermine MBI's authority.

One of Higa's Sekirei, a soft-spoken girl with a melancholy expression. She is a close-combat fighter, and dueled Musubi during the hunt for the last Sekirei. 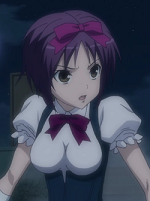 One of Higa's Sekirei, sent to capture the last unemerged Sekirei. She wears a long dress decorated with ribbons, and fights with a pair of sharp rings. 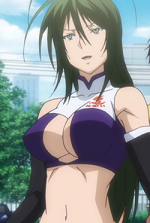 One of Higa's first Sekirei, acting as an enforcer for his various schemes. She is a tall woman that fights with a staff. Her defeat at the hands of Musubi has a great impact on Higa.

One of Higa's first Sekirei, who serves as his enforcer and bodyguard. She is a martial artist-type, and shown to be quite ruthless. 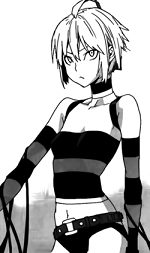 One of Higa's Sekirei, an aggressive and impatient girl. She wields several knives, mounted on the end of long whips much like a cat-o-nine-tails.

One of Higa's Sekirei, sent to steal the Jinki from Izumo Inn. She is extremely nervous and shy, and wields a pair of blades hidden in her sleeves. 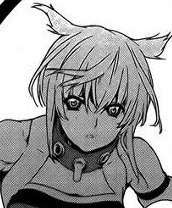 An Eastern Sekirei, first appearing during the assault on Izumo Inn. She forms a rivalry with Kazehana.

An Eastern Sekirei, first appearing during the assault on Izumo Inn. She at first seems very meek, but reveals herself to be utterly psychotic in battle.

One of Higa's Sekirei, who was quickly defeated by Homura during the 3rd Stage. 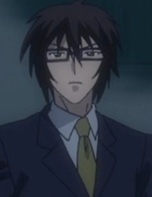 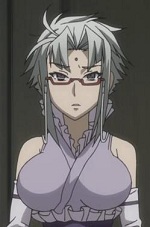 A Brain-type Sekirei allied with the Eastern Sekirei, and serves Higa alongside her Ashikabi. 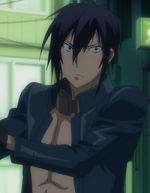 The Ashikabi of the West. Though a hot-tempered and violent biker, he is actually a good person that deeply cares for his trio of Sekirei. After befriending Seo, he is convinced to become another of Minato's ally and supports him during the 4th match. He is something of a pervert, and seems to develop a crush on almost every woman he meets.

The West's trio of Sekirei. They behave in an extremely childish manner, but their strength has allowed him to claim the Western portion of the city as his territory.

A trio of blood-thirsty Sekirei, barely under the control of their Ashikabi. 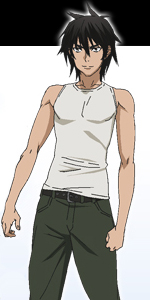 The first Ashikabi that Minato encounters, Seo is a shady but kind-hearted man that becomes one of his most vital allies. His Sekirei are the twins Hikari and Hibiki, and he was once the best friend of the deceased scientist, Takehito Asama. This friendship allowed him to learn many secrets about the Sekirei, and also granted him a special ability that allows him to weaken enemy Sekirei.

Hikari and Hibiki
A pair of Sekirei twins with lightning powers. They hunted unemerged Sekirei and attacked Musubi in their first appearance, but they later become important allies to Minato's group. 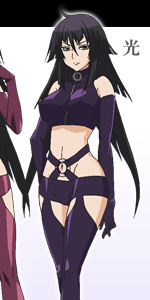 The violent and bad-tempered twin sister. She is often physically violent towards Seo, electrocuting or hitting him when he angers her. 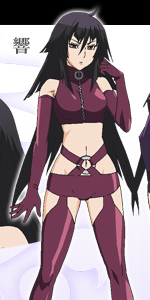 The soft-spoken and kind twin sister who attempts to temper her sister's more aggressive behavior. 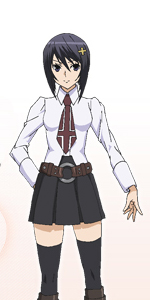 Minato's younger sister, a cheerful but violent girl obsessed with pretty boys. After becoming Shiina's Ashikabi, she promises to help him find Kusano and hunts other Ashikabi looking for information. This leads to her earning the title of the "Devil Ashikabi", making her something of an urban legend feared by other pairs. She is completely unaware that her brother is also an Ashikabi, and that Kusano is one of his Sekirei. 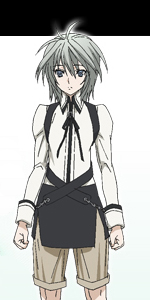 He is very soft-spoken and kind, and considers Kusano his younger sister. His powers are related to death, and he is known as the "Death God" Sekirei, with many urban legends surrounding him. While extremely powerful, he dislikes violence and expresses remorse for having to hurt others in battle. 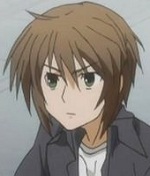 An Ashikabi with many things in common with Minato, including living in his old apartment. His sekirei, Kuno, is extremely weak and unable to fight, so he requests Minato's help in escaping from the capital. Though prone to mocking Kuno as weak and useless, he is kind-hearted and loves her deeply. 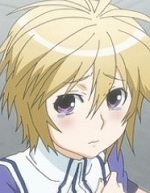 A weak Sekirei that wanted out of the Sekirei Plan with her Ashikabi, Haruka Shigi. Her power is a sonic scream. 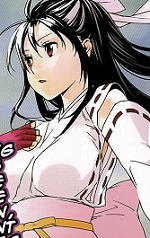 A strong and exceptionally skilled Sekirei, wielding a naginata in battle. Her Ashikabi is Oosumi Orihiko, who she found with Homura's assistance. She is extremely honorable and kind-hearted, but takes her role as a warrior very seriously. A long-time friend of Musubi, the two share a significant history and have promised to face each other in battle.

Kaho's Ashikabi, an intelligent and level-headed young man that aids Minato during the 4th match. He knows quite a bit about the Sekirei Plan, and is considered one of the serious contenders that could win.

A thug fought by Yukari and Shiina. After his defeat, he puts out a fake bounty on her head.

An abused Sekirei who faces Shiina in battle.

An Ashikabi that approaches Minato during the 3rd Stage, and proposes a mass escape attempt. However, he is cold-hearted towards the plight of other pairs and even mocks those he defeated in the past. After mocking Haruka and Kuno, his request is rejected and he is forced to flee when discovered by the Disciplinary Squad. Karasuba later terminates his Sekirei, and he is taken into custody.

An Ashikabi in an abusive relationship with her Sekirei. She considers Yukari her rival and seeks to steal the title of "Demon Ashikabi" from her. 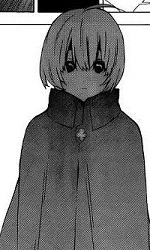 Yashiro's Sekirei. Amebane is a male Sekirei that battles Shiina during the 3rd Stage. He holds a deep hatred of humans and is abusive towards his Ashikabi. 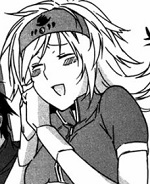 A Sekirei that is tricked into accepting a bounty placed on Yukari and Shiina. She survives the battle, and later appears during the 4th Match. However, when she realizes that Yukari is taking part, she retreats from the match. 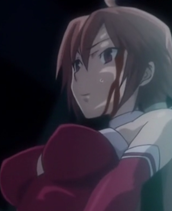 A Sekirei that wields a massive halberd, and managed to win the 2nd match. She celebrates her victory with her Ashikabi, Takano Kouji, but was attacked and terminated by two of Higa's agents in order to steal the Jinki.