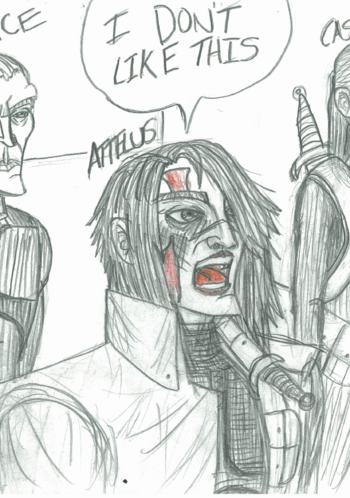 I'm not a good person. So tell me what means more, Marcel? Someone who's inherently good, doing good? Or someone who's inherently evil doing good, despite their ingrained nature?
"I am not a partier I am an assassin, who kills people for a living and it being the dangerous job it is and that I would quite like to live past my twenties, I spend every waking hour training. Making sure I have the necessary skills to live to see the next day".

A young apprentice assassin whose father, Serghar Kaltos, was perhaps the greatest assassin to ever set up shop in the Calixis Sector. Attelus has to constantly live in his father's shadow. Born and raised in the recently discovered Agri world Elbyra, he is a bit more idealistic and kind than an assassin should be but this could soon change. He is a chain smoker but ironically is strongly against the use of harder drugs.

"Well if you call me “dear” one more time you will find yourself sorely lacking a head."

She was recently employed by Glaitis. Though she is the same age as Attelus, she holds the rank of full assassin and is extremely ruthless while at it.

"And kid if you want to sheath your blade in her may I suggest using your “other” blade instead."

A senior mercenary of Taryst's organization, he is an ex-guardsman, an explosives expert, and the leader of Elandria's and Attelus little squad.

'Torris tilted his head, “like the old times, eh,” he echoed in good humour. “Kid you may have a very, very long list of issues and character flaws, but despite that we like ya. For some reason I can’t think of yet but maybe we’ll live long enough to figure that out one day.”'

Another senior mercenary under Taryst, Torris is an ex Arbitrator from Malfi and one could say the heart of the team. Like Garrakson he has a dirty sense of humour, but is more discerning and observant because of his background.

"Vark, she hired me. I was a rogue, mercenary psyker. Of course she's a frigging radical and of course I don't mind she is one. I believe the God-Emperor is above all things but also believe that his rules he made during the birth of this Imperium of man were more suited to a different time. I believe that he now understands that much must be done for the continued survival of our species that ten thousand years ago would be deemed wrong."

An exceedingly powerful rogue psyker employed by Taryst who specialises in telepathy but has some skill in other disciplines. Has a past with Attelus.

"I don't know who had installed the security of Taryst's files but it is good, very, very, very good maybe even the best I have ever seen, maybe it was a priest of the mechanicum that would be the only explanation that I could think of but I am me and me being me the genius that I am I was able to access some of Taryst's data base."

A very young Hacker hired by Taryst to overlook his data security.

"And for that I will always be ashamed, I am a coward, Attelus. I should have died in duty along with my comrades but yet here I am. Working as a soulless mercenary for an ugly and back stabbing corporation that really shouldn't exist, but now it's time to face up like you did with Vex, it's time to finally, truly face up to my mistakes."

The second in command of Taryst's mercenary army. He's charismatic and charming. He is also the the other last survivor of the Cadian regiment Garrakson hails from, being Garrakson's commanding officer.