Vine/Sanders Shorts tropes involving the Dad Guy, the Prince Guy, the Teacher Guy and the Anxiety Guy appear in the Sanders Shorts section from Thomas Sanders' page as, as noted by Thomas Sanders himself, these characters are independent from the Sanders Sides and are part of a different universe. This includes YouTube special "Dad's Big Game Day Tips", which features the Dad Guy from the Sanders Shorts, and not Morality. On the other hand, the Snapchat and Twitter special video "My Personalities All Had Little Adventures Yesterday" is canonical to "Sanders Sides" due to the title explicitly calling them "Personalities",note This special was first released in the first age of the series, in January 2017, way before characters started being developed and the word "personalities" was officially replaced by "aspects", "Sides" or "personality" as a group name. therefore tropes seen in that special can be found here. Since the Sanders Asides episodes are canon in the Sanders Sides universe, tropes seen there can be found here. Also, as the Sanders Sides characters have started appearing sporadically in the Shorts, character tropes seen in these appearances can be found here.note They're distinguisable from the original Shorts characters in that the Sides wear the newer outfits with the emblems and the Shorts characters wear the older outfits that the Sides dropped off at the beginning of season 2.

SPECIAL WARNING: Bear in mind that, when a new episode is released, all of the folders are updated with the new information provided by the episode, so spoilers are to be expected in all of the folders, not just in the new ones if any. Also, the tropes are presented alphabetically, not in chronological order from older to recent, and as stated at the beginning of the page, spoilers here are not hidden, all of them, so people that haven't watched these recent episodes must be warned that these spoilers could come out at any moment of the reading, even on the folder titles.

open/close all folders
General Thomas and his Sides Tropes 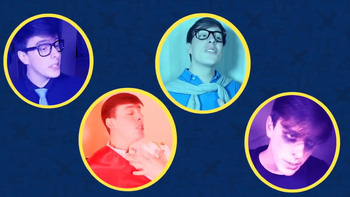 "Wow! Is there four people in here or is it just me?"
This folder contains tropes shared by multiple characters in general, including Thomas, the main Sanders Sides and the Dark Sides and excluding any other human character.note Multiple means sometimes two, generally three or more characters, not necessarily all of them at the same time. Tropes present only in single characters and those that, even if they're shared by multiple characters, have a special meaning for one particular character, are in these individual character folders. Tropes that belong to the Dark Sides as a group are not here but in the Dark Sides folder below. Any other human characters have only each their own folder for themselves. 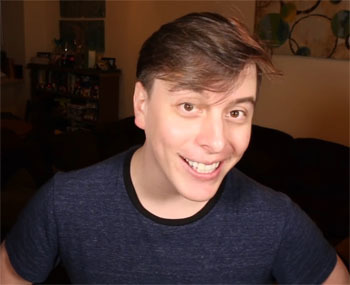 "It's a little weird to be talking to myself so much..."

My personality is very weird, I'm sorry about that...

Thomas is a young actor, singer and YouTuber who has the ability to project all the different aspects of his personality into several "metaphysical human beings" he calls the Sanders Sides, with whom he regularly sustains conversations to find solutions to his dilemmas.
First appearance: "My True Identity", October 19, 2016 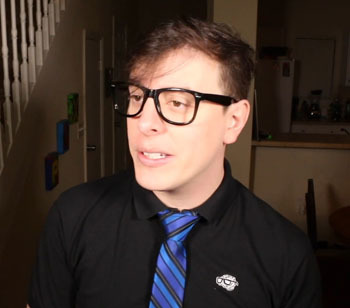 Feelings. The bane of my existence.

Logic, whose real name is Logan, and is also sporadically called Teacher or "Teach" as a nickname, is Thomas' analytical mind, as well as his acquired knowledge over the years. He handles facts and points out fallacies, and he is the source of data and information in every conversation with the other Sides. 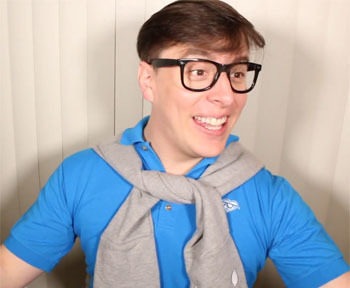 "Independence is a celebration! It's got "dance" right in the word." 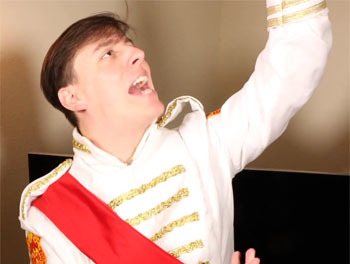 You can't have a ball without a prince.

Creativity, whose real name is Prince Roman but is also known as "Princey" or simply Roman, is the embodiment of Thomas' fanciful Side: his hopes, dreams and ideals, as well as his imagination and light creativity. He is also Thomas' ego and his femininity. 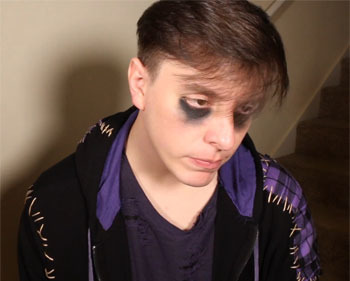 Anxiety, whose real name is Virgil, is the soft-voiced, but not necessarily soft-spoken aspect of Thomas' mind. He gives voice not only to Thomas' doubts and fears, but also his negativity. He also represents Thomas' fight or flight reflexes and his survival instinct. In the past, he was one of the Others, or as Roman calls them, the Dark Sides, something he doesn't seem to be proud of, as he hid it from Thomas for a very long time, even after Thomas released him from Deceit's block to reveal this secret. 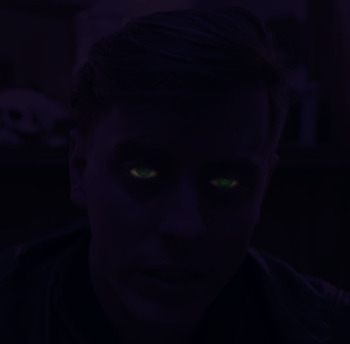 Do not allow him or any of... his friends to stick around that long ever again!

The Dark Sides, or "The Others", represent all the repressed aspects of Thomas, the ones he didn't want to recognize so badly that went hidden even from him. It is unknown right now how many there are or what each of them represents. For the time being, three of them are known: Virgil (formerly), Janus, and Remus.
Deceit/Janus 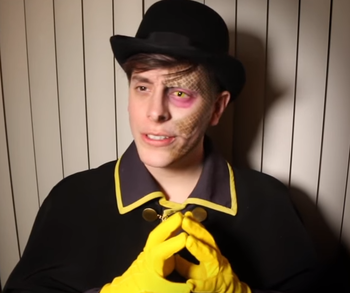 I don't want Thomas to be disadvantaged in a world where you can die for not following the rules made in the name of a lie.

Deceit, whose real name is Janus, was the first of the Dark Sides to show up.note Not counting Virgil, whose Dark Side status wouldn't be known until much, much later after his first appearance. He is literally two-faced and represents Thomas' impulses and desire to lie, whether to himself or the others around him. Paradoxically, though, he hides from Thomas his unpleasant traits and at the same time he also pushes Thomas to recognize these unpleasant traits and take advantage from them. He also detects and uncovers the lies coming from Thomas or others and acts as a mechanism of self-preservation for Thomas from the dangers of society constructs, which he perceives as lies. 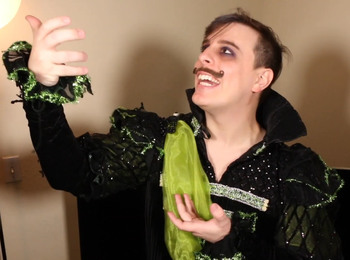 Speaking of suggestions, when are you actually going to jump out of a moving car? I've been bringing it up for years, and still nothing.

The Duke, whose real name is Remus was the second revealed Dark Side. He's Roman's twin brother, and like him, he also embodies creativity, but unlike Roman, his contributions are almost always too disturbing, sexual and/or violent for Thomas' comfort. He also instills his contributions in the form of intrusive thoughts that appear in Thomas' mind uncontrolled. 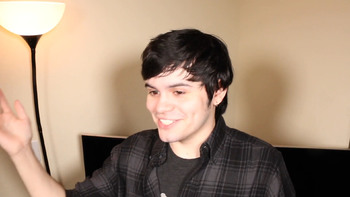 "I just hope that you didn't do that thing that you do sometimes, where you freak out and stand in the middle of your living room and talk to yourself for twenty minutes."

I literally said F-word face. Is that serious in your world?

Joan is Thomas' best friend and creative partner. Like Thomas, they're an actor, but also a writer and playwright.
First appearence: "Can Lying Be Good", February 3, 2018 (voice); "Why Do We Get Out of Bed in the Morning (in person), April 12, 2018"
Portrayed by: Joan S.
Lee and Mary Lee 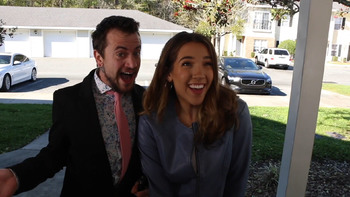 "How are you doing, you beautiful man?"

We love each other, hence the marriage.

Thomas' long-time friends who are married to each other. They have been in Thomas' life at least since high school, maybe even longer. Lee covered Thomas' back when he first came out of the closet and Mary Lee was always ready to lend Thomas a hand in case he needed her help.
First appearance: "Selfishness v Selflessness", March 31, 2019 (mentioned); "Putting Others First: Selfishness V Selflessness Redux", May 1, 2020
Portrayed by: Aleksander Wild and Diana Truman
Nico Flores 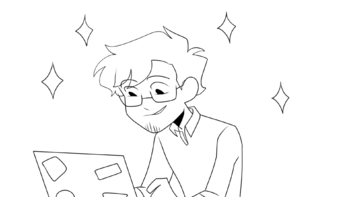 "Let's not waste this (opportunity)"

Mr. Flores, very formal of you! You can call me Nico if you like.

A cute guy that Thomas met at the mall. He's a writer and poet and, judging by the pins and stickers in his backpack and laptop, he has a lot of things in common with Thomas, who seemed to fall for him at first sight.
First appearance: "Flirting with Social Anxiety", October 10, 2020
Portrayed by: Manuel Marichal