The list of characters from the four teams which played at the Side-B1 Quarterfinals from the manga and anime series Saki, sorted according to their final placings: Kiyosumi, Himematsu, Eisui and Miyamori.

Kiyosumi and Himematsu have qualified for the Side-B Semifinals, where they are currently playing against Side-B2's Rinkai and Usuzan.

Team Eisui, considered to be the strongest in Kyushu, is representing Kagoshima Prefecture for the third year in a row, and is currently seeded at third. Its members bear a miko theme, and stay in solemn rooms during competitions. For this year's competition, all the branch families have come together so that ace player Komaki doesn't have to carry the team by herself.

Team Eisui, together with Miyamori, has been eliminated at the National quarterfinals, chalking in a third-place finish. 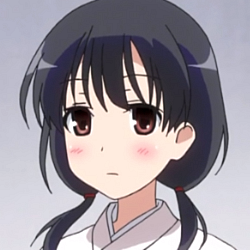 Ace player of Team Eisui and scion of the main family of the branches which make up the team. Last year, as an individual player she achieved fame as a "mahjong monster", but pushed herself too hard, and now has her teammates watching out for her. Kyouko claims that part of Eisui's strategy is to let Komaki go for the big hands and that she will play multiple styles, but is a little shaky sometimes. Her teammates call her "Princess".

Her powers seem to stem from being a vessel of seven goddesses (out of eight — the other is handled by her cousin Kasumi), and becomes a dangerous board-clear when asleep. The drawback is that she doesn’t know the sequence of her deities' appearance. 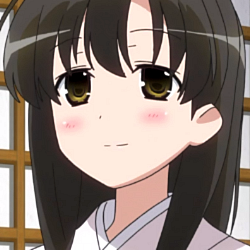 Komaki's cousin and finisher of Team Eisui. Kasumi prefers to play defensively, refusing to deal into someone's hand, and is also a good analyst, as shown during the quarterfinals, as she had held on to the tiles that Saki would have used a kan on. She was also the first to notice Toyone’s ability and the one to tell Hatsumi to take note of Sae.

Kasumi's abilities stem from her close relationship with Komaki — since she couldn't be the vessel for all eight of her goddesses, Kasumi serves as the vessel for the odd one out, using its powers to collect honor tiles and one random suit per hand. However, she can't switch back to her usual defensive style until she is purified.

Her ability is slightly modified in the anime — rather than simply taking possession of the "extra" god among those her cousin is supposed to hold, she instead captures the negative, non-divine spirits that might try to possess Komaki (represented by a staring eye). 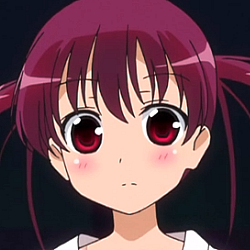 A senior who looks too young for her age, sporting a swimsuit tanline and very loose clothing, as well as a ceremonial headdress during gameplay.

Like Team Kiyosumi's Yuuki, Hatsumi's game is extremely powerful when she is seated on the North. Her ability, called "Gates of Evil" by Kumakura, makes it easy for her to gather north and east tiles, and to a lesser extent, south and west tiles as well. Attracting this tiles will guarantee a ‘Big Four Winds’ Yakuman if not stopped. She doesn’t believe that Sae had the power to block her and would go through great lengths just to keep her North position, which makes for easy pickings by Sae. 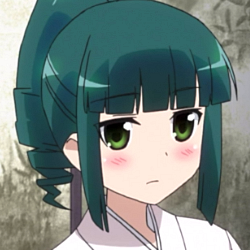 A stoic newcomer whose emotions only come out when talking about the demon world and her favorite food, snacks coated with muscovado (a nutritious brown sugar).

Although her playstyle isn't elaborated upon in the manga, the anime expands upon it, and it is shown that she prefers to end the round via quick hands whenever she feels that a particular opponent is gathering a big-scoring hand. 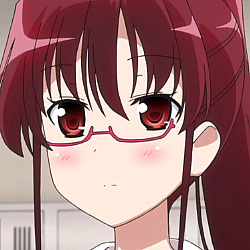 Another player for Team Eisui.

Originally a three-girl club without any kind of aspirations for the Nationals, this all changed when pro mahjong agent Toshi Kumakura became their adviser. Bringing Toyone with her, Toshi made the girls aspire for greater things, such as representing Iwate Prefecture in the Nationals. After Aislinn watched them play with Toyone, she was inspired to join Team Miyamori, allowing them to field a Nationals-caliber team, gaining its spot after knocking off high-ranking Makabi High School.

The team is notable for being composed entirely of seniors, which puts the future of the club after the summer tournament season in doubt, especially now that Team Miyamori has been eliminated from the National quarterfinals at fourth-place. 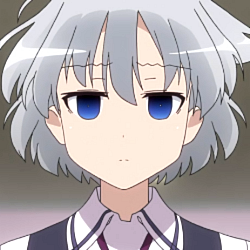 One of the three original members of Team Miyamori and classmate of Aislinn, who she invited to watch a game (against a visiting Toyone), inspiring the latter to join her team. Her style is fairly orthodox, at least compared to Toyone. She’s also not a fan of moving and exerting energy.

Shiromi's ability is given more details in the anime. Her ability is called "Mayoiga" in which the chances of her getting a high scoring hand increases the more she hesitates and thinks about her moves. Kasumi of Eisui considers her as a threat because of this. 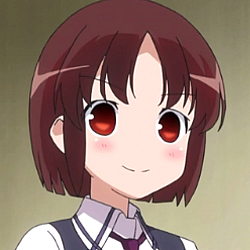 Another of the three original members of Team Miyamori. A very short girl who does not tolerate any non-sense and isn't afraid to speak up her mind. She usually has a sweat drop. Her style is similar to Team Tsuruga's Momoko, in that she favors damaten, meaning she can win despite not declaring riichi. 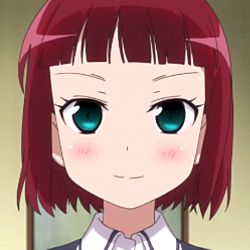 Another of the three original members of Team Miyamori as well as its club president and a Toshi fangirl.

Sae's ability is to "seal" an opponent by concentrating her stare at the target. Once she has an opponent marked, it becomes nigh-impossible to complete a hand, although playing this way puts a significant drain on her. She was responsible for knocking off the high-ranking Team Makabi, getting her team to the nationals and helping Toyone hide her ability. 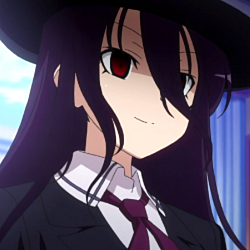 To say that Toyone is tall compared to the rest of Team Miyamori (or anyone else in the championships, for that matter) is an understatement. Scouted by Toshi barely half a year prior to the Nationals, Toyone hails from a mountain village with very few children her age. With only the family TV for company, Toyone had a relatively lonely childhood, which isn't helped by the fact that she is towering at 197cm (6'5"). No wonder that she treats her transfer to Miyamori, as well as entry into its mahjong club, where she can finally share her love of the game with her peers, as probably the best that has happened to her life.

Due to watching a lot of mahjong matches on TV, she is a fan of "Mahjong idols" like Komaki and Nodoka. At the end of the Captains' match, aside from asking their autograph, she also asked for Saki, Kasumi and Kyouko's autographs.

Toyone is treated as Team Miyamori's secret weapon, and her teammates went to great lengths to keep her style vague up to the Nationals. She possesses the "Rokuyou" abilities — one is to declare a riichi after another player declares, winning off the initial riichi, which is known as "Senbu", earning her the nickname "Right-Behind-You-Toyone"; another is to win when she has one tile remaining in her hand after she makes calls on sets until only one uncalled tile is left (called a naked wait since she's practically revealing her hand), which is known as "Tomobiki"; and the third is called "Shakkou", which allows her to call dora tiles by having the surrounding two tiles. It is unknown if Toyone has other abilities related to the other "Rokuyou". 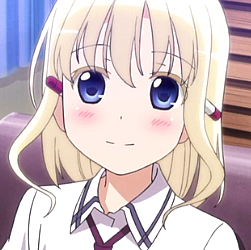 An exchange student from New Zealand, Shiromi's classmate, and final member of Team Miyamori, having joined after being invited to watch them play a game against Toyone, who was visiting the club at the time.

Prior to the Nationals, Aislinn was noted to always get a closed hand tenpai before the thirteenth turn, ensuring a winning hand. According to Team Himematsu's Kyouko, Aislinn also has the highest percentages in New Zealand's global matches. During the National quarterfinals, she is considered the strongest player in the Sergeants' match until Mako disrupted her by winning small hands.

Aislinn's propensity to get a guaranteed win via tenpai was upgraded into an outright occult skill in Zenkoku-hen. After getting her first hand at the start of a round, she then "draws" in her mind the most ideal hand she could get based on it. She also draws what she expects the tiles in her opponents hands to be at that point. There doesn't seem to be a point limit to what Aislinn can envision, but when she does imagine the hand she wants, all she needs to do is get the tiles she needs to complete it. Still, her tiles follow conventional patterns, which Mako exploits to her advantage. 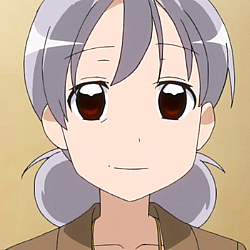 Adviser of Team Miyamori, who helped motivate her charges by scouting Toyone, and herself a pro mahjong talent scout. Years ago, she scouted Harue Akado (current adviser of Team Achiga) for a corporate team, and when she encounters the latter again at the Nationals, she tries so again, this time for another company.