open/close all folders
Janeway of Borg 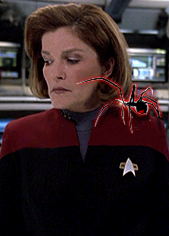 "YOOOOU SHOULD EAT HARRYYYYY..." "That's a terrible idea! ....But at least you're thinking, keep it up."

Still crazy after all these years, the inimitable Captain Kathryn Janeway spent her childhood ducking her drunken father's lobbed beer bottles and clawing out of dry sand pits, contributing greatly to her resourcefulness as an adult. She began her Starfleet career as a "scientist" and Johnny-Come-Lately cyberneticist, but decided that a life of petri dishes and homicidal albino androids wasn't for her. After handing in her blueshirt, Janeway slept – er, climbed her way up the command structure, culminating in her hijacking of the USS Voyager. Her name soon become synonymous with slavery, genetic mutation, and destruction across the expanse of the Delta Quadrant. Her ship eventually did make it back home, though it was struck by a meteor while passing over the Golden Gate Bridge, so points for effort. 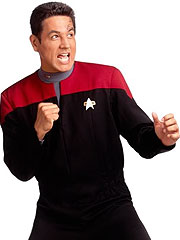 Chakotay has always had a keen interest in… (*roll roll roll*) Boxing!

Embodiement of just about every Hollywood stereotype concerning American Indians, even managing to invent a few new ones. Admittedly, he does not run a casino (yet). More or less useless outside of the ship, as he insists on not even scanning burial sites to avoid violating their "sanctity." Proves irresistible to the ladies for some unknowable reason.

Unlike most of the crew, he seems to be one of the few (including Tom Paris) to not accept Neelix immediately with open arms. This, of course, backfired on him by convincing Neelix to befriend Tuvok at all costs. 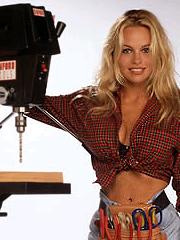 The best engineer the Maquis could muster, thus explaining their eventual defeat. A menace in Engineering, hopeless as a scout (even using a tricorder, she failed to identify manure.) Virtually anything she builds will result in catastrophe – the dreadnought missile she programmed to hit the Cardassians wound up in the Delta Quadrant, ignoring all other sensor data (stars in the wrong positions, non-Federation/Cardassian ships in the vicinity, etc.), allowing it to backfire on her own vessel years later. 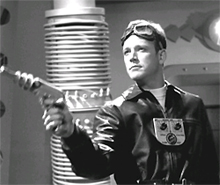 "For some reason I was thinking of a doomed ship Captained by someone who thoughtlessly steered the crew into harm's way, causing a disaster so legendary all would remember it for centuries to come."

An ex-member of a chain gang for the gifted, turned acting helmsmen aboard the USS Voyager. Tom claims only his piloting skills but proves to be good at almost everything – He has acted as a commando, pilot, field medic, engineer, scientist, historian, and more. Also invented, designed, and built the universe's first Warp-10 reactor (discarded by Janeway in one of many plots to thwart VOY's return). Easily considered to be the third most competent person in Starfleet, which is excusable considering the first two are Kirk and THE Sisko. 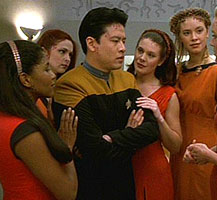 "Help."
Starfleet's oldest Ensign. He claims to remember being in his mother's womb, and he tragically lost his dignity in his childhood due to an unfortunate accident involving a bottle of mustard and a wood chipper, and it just never grew back. Harry dies on an almost daily basis but is resurrected for more torments from a fun-loving universe. Originally served as the ship's expositor while displaying woeful ignorance on any subject, including his own planet (He once thought a '36 Ford truck might be an early hover-car and didn't have a clue who Amelia Earhart was.) It's just possible he might be sexually confused, but don't quote us on that.
Advertisement:
Seven, AKA Cybertits, AKA Silicone of Nine
Autistic Human who acts like a Vulcan, with a strange taste in catsuits. Nevertheless, she is one of the more competent mammaries –- er, members -– of VOY's staff. Able to use her vast array of Borg tricks to bypass firewalls and hastily fix problems the writers were too lazy to think of actual resolutions for. Inevitably, though, her work goes unappreciated amongst the flatfooted Starfleet types she must grudgingly work with. Tried to defect back to the Collective, but rethought it when the new Borg Queen turned out to be even more hazardous to her crew than Janeway was. 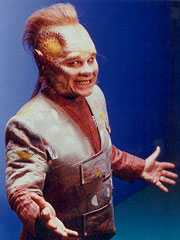 "Thanks for consuming our oxygen, Hedgehog."
Conceived when the universe ran out of joy, combining the irritation of Wesley with the repugnance of Ferengi. Wesley was an annoying know-it-all, but at least he really did know what he was talking about. Neelix claims to be an expert in every field, but events inevitably prove him to be a clumsy oaf. So obnoxious and so stupid, he makes Jar-Jar Binks look like Sean Connery in comparison, Janeway kept him on as a means of further maddening her crew.
The Doctor

Voyager's hologrammatic Emergency Medical Hologram, and one of the few people on the ship with no major personality disorders to speak of. If only because by comparison his lack of bedside manner is nothing compared to the rest of the crew.