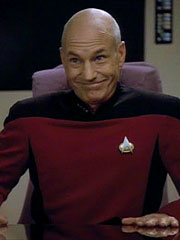 "Kill 'em all, Mister Worf! We have to protect the sanctity of the Prime Directive! (Heh heh heh! Eat lasers!)"
A long-winded, officious layabout and something of an anti-Kirk. Suffers from crippling pedophobia, for which he was sentenced to serving as emcee of the Federation's top-rated cruise ship/daycare center. He distrusts the children aboard his own ship more than any alien threat it comes across. Worships at the altar of Jim Kirk and the Prime Directive without having the faintest idea of what either represent. Consequently, he tends to fall back on Shatner-style bluster, but folds like a lawn chair when he's actually forced to fight. 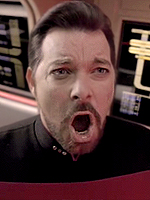 "The only solution is to give in to despair and transform into witches."
Lt. Commander Data
Counselor Deanna Troi 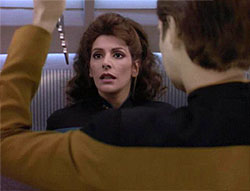 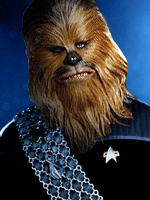 "It doesn't take much to see the problems of a strapping Klingon and a Human/Betazoid mongrel don't amount to a hill of beans in this crazy galaxy."
Worf is the perhaps the only officer in Starfleet actually assigned to a suitable job. Unfortunately for him, he's assigned to two jobs simultaneously (Tactical and Security), and thus doesn't perform either of them very well. He's also something of a black ops man, carrying out discreet 'accidents' so Picard can adhere to the Prime Directive — on paper, at least.
Wesley Crusher
Oh, God, why?
Ensign Sonya Gomez
Q