open/close all folders
The United Federation of Planets
An irradiated mudball of no particular note, Earth stepped onto the galactic stage in 2063 AD when some Vulcans mistook a drunk idiot riding a missile for evidence of civilization. (The Vulcans have since tried their very best to quarantine this mistake.) Earth is currently at the heart of a galaxy-spanning republic, despite its economy having gone tits up and possessing the most shoddy technology this side of North Korea. Federation citizens are required to look and sound like Andy Hardy while evangelizing their idyllic (read: homogenized) way of life to other species.
Advertisement:
Starfleet Command 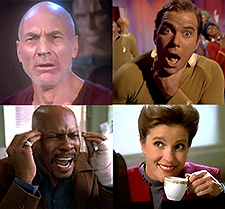 "For 500 years, every ship that has borne the name Enterprise has become a legend! (Though I suppose you could argue the Titanic has become a legend.)"
The leading armada of the Federation and butt of jokes everywhere. Boasts an uncanny knack for assigning people to places where they would be least useful. Your typical Federation "starship" is is kind of like an anti-Titanic in a way. People aboard the Titanic had the intoxicating feeling that the ship was unsinkable and nothing could stop it; the height of ego. What’s darkly humorous about Federation ships is that almost everyone aboard is aware that they're pretty damn sinkable: a barely-functional hodgepodge of antiquated equipment and used pinball machine parts.
The Borg Collective 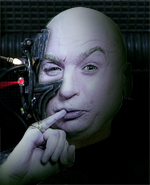 "...And while you're at it, take her to the Comfy Chair!"
The Mirror Universe
Holograms
The Romulan Star Empire
Advertisement: