open/close all folders
The band 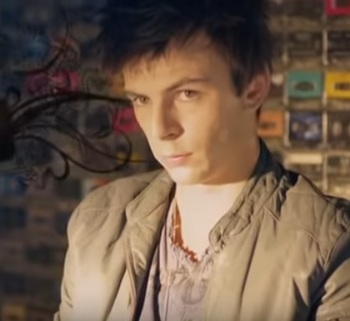 The band's founder and lead guitarist.

Tino's love interest who joins the band as the singer.

Ani's best friend and the band's drummer.
Other students

A transfer student to the school and the band's main rival. Later becomes a couple with Bobby and joins the band.

A girl from Ani, Filip and Mira's class. Mira's friend who later hooks up with Filip.

The leader of the school's hip-hop gang "Дуло в тила" ([Dulo v tila] - "Barrel to the back of the head") and a weed dealer.

A classmate of Bobby and Tino who has an obsessive hobby of capturing everything important on camera.

A classmate of Ani and Filip who lusts over Bobby.

A girl who harasses and mugs her female classmates, such as Ani.

A student one year ahead of the main cast, frontman and lead guitarist of the death metal band Zombie Funeral.

The principal and German teacher, Tsekov is trying to keep up the image of his school.

The math teacher, she is exceedingly strict.

The physics teacher, he dreamed of becoming a scientist, but instead is put in charge of unruly high school students.

The PE teacher. She succeeds.

The Bulgarian language and literature teacher.

Dimitrova's husband, he met her when on a trip to Bulgaria and gets a job as the school's English teacher.

The new physics teacher after Savov gets temporarily sacked.

The cleaning lady.
Parents and relatives

Tino and Lily's mother, Maria works as a make-up artist at the National Theatre.

Maria's boyfriend, with whom she has broken up numerous times.

Ani's father who's struggling with alcoholism.

Filip's father, a colonel from the army.

A pair of music producers who offer a contract to the band after they win a contest.

A producer who offers the band a contract after they break it off with Emil and Todor.

A gigolo that Ghetto and his crew hire to keep Pesheva happy.

The owner of the garage the band has rented for rehearsals.

Ani's boyfriend when she gets kicked out of the band.
Ministry of Education