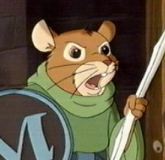 A young mouse who idolises the long-dead Martin the Warrior, Matthias is a dreamer who doesn't quite fit in with the other mice at Redwall Abbey. When Cluny the Scourge lays siege to the Abbey, Matthias' clear thinking and iron spine make him one of the Abbey's chief defenders, teaching the quarterstaff and organizing the defenses. Convinced that only by recovering Martin's sword can the Abbey prevail, Matthias sets out on a dangerous journey that will take him from the sparrow colony at the top of the Abbey, to the depths of Asmodeus' den, and into a fateful duel with Cluny himself. Awarded the title of Abbey Warrior, Matthias is eventually forced back into action when Slagar the Cruel kidnaps his son Mattimeo, and heads off on a journey to bring his son home.

The quiet, attractive daughter of Mr. and Mrs. Fieldmouse, Cornflower is a level-headed young mouse who hides an agile mind and strong will behind her pretty face. She's attracted to Matthias from the start, and is one of his strongest supporters during the defense of the Abbey from Cluny the Scourge. During the later invasion by General Ironbeak she is one of the Abbey's chief defenders, alongside Constance.

The Father Abbot of Redwall at the time of Cluny's arrival in Mossflower, Abbot Mortimer is a kindly old mouse who serves as a surrogate father to Matthias.

An ancient mouse who acts as the Abbey's Gatekeeper and Recorder, Methuselah has held his job longer than anybody can remember. He's eager to join Matthias' quest for Martin's sword, and helps him decipher the riddles that lead to the fabled weapon.

The Badger Mother of Redwall Abbey during Matthias' time, Constance is tough and determined, with an aggressive streak that occasionally causes her to clash with the Abbot. She's one of the chief defenders during Cluny's siege of the Abbey, forming a rather personal rivalry with his right-hand rat, Redtooth, and is worth a small army of mice in combat. During General Ironbeak's invasion in Mattimeo she is put in charge of the defenses, and again picks up a rival, this time in the form of Ironbeak's right-hand crow, Mangiz. 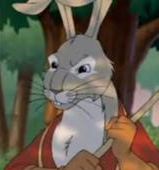 An eccentric hare who wants to be a stag, Basil is a retired regimental scout and foot-fighter, who joins forces with the Abbey during the war against Cluny the Scourge. He is fast friends with Matthias and Jess Squirrel, and accompanies both of them in Mattimeo, on the journey to retrieve the Abbey's kidnapped young ones.

The mother of Sam Squirrel, and Mossflower's champion climber, Mrs. Squirrel—who insists on being addressed as Jess—is one of the Abbey's most resolute allies. Fast friends with Basil Stag Hare, she helps him steal Martin's portrait back from Cluny the Scourge, and later joins he and Matthias in the pursuit of Slagar the Cruel, who kidnapped her son Sam, in addition to Matthias' Mattimeo.

The leader of moles in Redwall Abbey.

President of the Guerilla Union of Shrews in Mossflower (hence her bearing their acronym as her name). She has something of a rivalry with tribal elder, Log-a-Log, but is eventually persuaded to assist Redwall against Cluny.

A respected elder and leader of the Guosim, Log-a-Log quickly makes friends with Matthias, allying his shrews with Redwall in order to recover Martin's sword and fend off Cluny the Scourge. He later joins forces with Matthias to pursue Slagar the Cruel and his slaving band.

A young sparrow—or Sparra—whom Matthias first captures, and later befriends, during the siege of Redwall. Upon the death of her uncle King Bull Sparra, Warbeak becomes queen of the sparrows, and allies her tribe with the Redwallers, joining the war against Cluny, and later, the pursuit of Slagar the Cruel.

The mad king of the Sparra, King Bull is the deranged king, and the former owner of Martin's sword, which he lost to Asmodeus. Void of scruples, and verging on the edge of insanity, King Bull is nevertheless a wily, dangerous adversary. 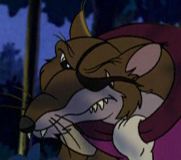 "Who dares challenge Cluny the Scourge shall perish!"

A brutal rat warlord with a career that has passed into legend, Cluny the Scourge arrives in Mossflower looking to settle down and become ruler of the countryside. He seizes on Redwall Abbey as a potential stronghold, and lays siege to the Abbey, intent on renaming it "Cluny's Castle", and making Mossflower his personal fiefdom. Troubled by nightmares in which he is slain by a warrior mouse, Cluny gradually loses his grip on reality, and becomes obsessed with the tapestry, and legacy, of Martin the Warrior. 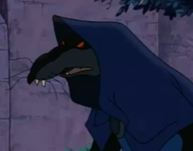 Cluny's secret weapon, the Shadow is a master of stealth, and serves Cluny as a burglar and assassin. Sent to steal the tapestry of Martin the Warrior, Shadow breaks into the Abbey, where a chance encounter with Matthias nearly ruins the entire plan.

Cluny's second-in-command (in the books), Redtooth is an ambitious rat who hopes to one day lead the horde himself. Loyal to Cluny out of fear and awe, Redtooth accompanies his master during his negotiations with the Redwallers, and makes a very personal—and dangerous—enemy out of Constance the badger.

Cluny's left-hand rat (second hand in the TV series), and the one who is the most personally loyal to him, Darkclaw is Cluny's stablest, and most trusted officer. While he resents playing second fiddle to the likes of Redtooth and Cheesethief, his fealty to Cluny never wavers, and he eventually ascends to the position of second-in-command.

A minor officer with vast aspirations, Cheesethief is a coward, a bully, and an all around detestable character. Disliked by the troops, but valued by Cluny, Cheesethief tries to catch his boss' eye, and drives the soldiers mercilessly to do so.

A rat captain in Cluny's horde, Fangburn is loyal, but not especially bright, ranking well below Redtooth, Darkclaw, and even Killconey and Cheesethief in the horde's hierarchy. Illiterate, and easily manipulated, he's little more than a tool for the horde's brighter officers.

A rat captain in Cluny's horde, Frogblood is one of the warlord's recruiters, responsible for press-ganging fresh talent.

A rat captain in Cluny's horde, Mangefur is one of the warlord's recruiters, responsible for press-ganging fresh talent.

One of Cluny's least competent officers, mostly kept around because he's expendable.

A ferret who joined up with Cluny for the plunder, Killconey acts as a liaison between the rat warlord, and the weasels, ferrets, and stoats of the horde. Brighter than most of Cluny's other officers, Killconey is unafraid to volunteer plans, making him a useful officer.

Another rat captain in Cluny's horde. 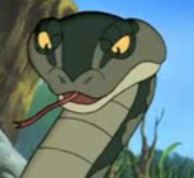 An immense adder with a fearsome reputation, Asmodeus views himself as an angel of death, helping his victims pass into eternity. Haunting the woods about Redwall Abbey, Asmodeus is avoided by all, except Matthias, who discovers that the deadly serpent is in possession of Martin the Warrior's sword.

A vixen who works as a healer, Sela is a spy and a traitor by nature. Attempting to play Cluny and the Redwallers against each other, Sela is found out by Cluny, who has her executed for her treachery.

A Snowy Owl who lives in an abandoned farm. Well known as a mouse-eater, he's a pompous puff of feathers whose life was once saved by Basil, and who happens to know where Asmodeus Poisonteeth is holed up. 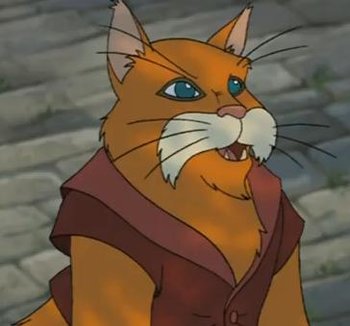 A farm cat who ends up aiding Matthias.