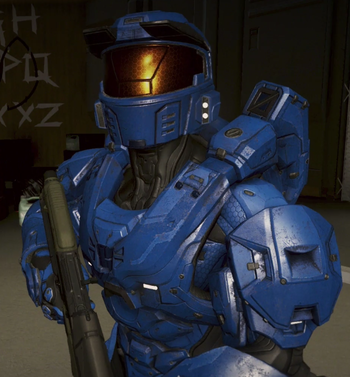 "Timeline? Time isn't made out of lines. It is made out of circles. That is why clocks are round."
Advertisement:
"Last time I was shot, I got a purple heart. Yeah, I hope this time I get a purple lung. You see, eventually I hope to build an entire purple person. And we will be best friends."
Voiced By: Joel Heyman (Seasons 1-17), Michael Malconian (DEATH BATTLE!)

Caboose, who accidentally enlisted in the Blue Army after mistaking a recruitment center for a college, is introduced as The Fool, but quickly devolves into a complete idiot. As his name suggests, he is the last to arrive at any train of thought's destination. Occasional journeys into his mind have revealed that Caboose's view of the world is at drastic odds with reality - he has mental constructs representing the rest of the cast running around inside of his head, ranging from a Church who vehemently insists that Caboose is his best friend, to a Sarge that talks like a pirate. Caboose is a bigger danger to his teammates than to his enemies, to the extent that the surest way to get him to shoot someone is to tell him they're on his team, and Command has a keyboard shortcut to report his teamkills (Ctrl+F+U). He is also the only consistent member of the Blue Team over the series, thanks to Tucker's absence from Season 6 and the first half of Season 7 and Church's absence from the first half of Season 7, all of Season 9 (to the real-world Blues at least), and Season 11.

Caboose primarily serves as a comic relief character and gets some of the series' best lines, but he has occasional impact on the plot. After Tex's death he's briefly possessed by O'Malley (and the resulting mental trauma may explain his lowered IQ afterwards), and when the Red and Blue Teams have to work together to track down the rogue AI, he helps Sarge combat the Zealots of Battle Creek thanks in part to his superhuman strength ("God's way of compensating"). Caboose gets along (marginally) quite well with machines, hence his "relationship" with Sheila and his friendship of sorts with Andy the bomb. And once in a great while, he has a useful idea, such as the plan that gets Washington and both teams into Command near the finale of Reconstruction. He wears dark blue armor, and in episodes created using Halo 3 is easily distinguishable due to his Mark V helmet, as the rest of the cast have upgraded to Mark VIs.

In Recreation, he is the only member of the Blue Team due to Church/The Alpha's Heroic Sacrifice at the end of the last season and also due to Tucker's absence. Throughout the season, he uses various bits and pieces to try and rebuild Church, leading to Epsilon's memories being based on Caboose's view of the Red and Blue teams... though exposure to slightly more in-touch individuals seems to have alleviated this.

He is one of the few real-world characters (the others being Sarge and Carolina) to appear in the present-day storyline of Season 9. He shows up at the end, leading a rescue mission to retrieve Epsilon from the broken memory unit.

In Season 11, he hits a Heroic BSoD due to Church's sudden departure, but this is alleviated when he gets a new friend - Freckles, the giant battle robot. Due to a misunderstanding, he's temporarily made the leader and Commanding Officer of the Blue Team, demoting Washington in the process.

In Season 12, he has joined the New Republic along with Tucker, Simmons and Grif, and is the captain of his own squad, the Blue Team. In the following season, it is thanks to him passing the test to be a "true warrior" that everyone makes contact with an Alien A.I. that Caboose names "Santa".

In Season 15, he has once again become depressed over Church's absence from the group and is overjoyed when the group receives a message that is apparently from Church. He is shown to not understand basic concepts like death, and is eventually forced to accept that Church is gone & he needs to move on with his life.

In The Shisno Paradox, he gets sent back in time with Lopez, and through several off-screen adventures he ends up accidentally starting several real-life historical events, as well as a few events in-universe. When the Reds and Blues later meet the Cosmic Powers, Caboose is the only one to not ask for his own Laser Blade, instead wanting to have Genkins' golf club, which Atlus lets him keep.

In Singularity, Caboose is trapped reliving his past constantly along with most of the other Reds and Blues. After he is saved by Donut and Agent Washington, he displays a surprising amount of intelligence with time travel, immediately understanding the situation and making a plan to fix the timeline with help from Huggins. The golf club he obtained the previous season also plays a major role in the climax of the season.

Command has a Keyboard Shortcut to report all of the team kills performed by PvT. Michael J. Caboose.

Example of:
Acquainted with Emergency Services

Command has a Keyboard Shortcut to report all of the team kills performed by PvT. Michael J. Caboose.