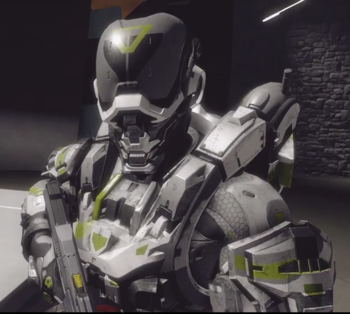 "I'm not a monster. I'm a soldier, like you."
Locus without his helmet 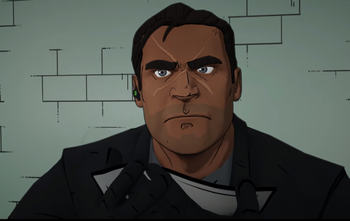 Advertisement:
"When a true soldier is told to kill, he kills. He does not question why, he does not mourn the fallen; he fulfills his role and moves on to the next."
Voiced By: Gray Haddock

A sinister gray and green mercenary introduced in Season 11 and one of the three leaders of the Space Pirates, in the service of the Chairman to manipulate the Federation. He serves as one the primary antagonists of The Chorus Trilogy, and the most proactive one in Season 11.

Locus first appears to be the most dangerous and zealous member of the Federation who no doubt harbors grim intentions for the "legendary heroes" and the rest of Chorus. He spies on the Reds and Blues throughout the season, and does his best to sabotage any possibility of their rescue, including murdering the pilot who brings Donut, Doc, and Lopez to the crash. While Locus was always treated as antagonistic, the reveal is that he's not working for the Federation at all, but rather manipulating them for the Chairman's purposes, makes him more sinister.

He fashions himself out as an emotionless killer who would kill and get on with it so that the job would be done. However, he has a very creepy fascination with Agent Washington that breaks his emotionless killer personality. In comparison with Felix, he is very serious about his job, and a firm believer of Why Don't You Just Shoot Him?, never doing any Evil Gloating. This makes him the more dangerous of the pair, yet at the same time, the less evil one. Throughout Season 13, Wash and Santa inspire him to make a Heel–Face Turn at the last moment, turning on Felix and letting him be killed before escaping from the Reds and Blues with Chorus's Great Key.

Season 14 reveals his real name to be Samuel Ortez.