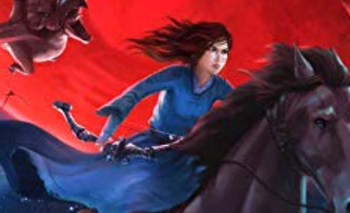 I must be Mayrikafsa, cunning warrior of the Kihuut. I cannot be weakling Rae. Not now. Not ever again.
Rae is a space farmer before being kidnapped by the Kihuut. She takes the name Mayrikafsa as a Kihuut warrior.
[We] might as well be waving a flag to the Cheese. "Hey there! We're eating our biscuits! Want to attack? That'd be mighty fine!"

"Why shall I be a young warrior? A Kihuutkafsa? Because I am a strong fighter. I have the best aim of anyone in this village. I will not just go on raids one day. I will lead them."
Temple is Rae's sister. She is renamed Kalashava after joining the Kihuut.