Cyber Boy was born in the final years of The Civil War of his Home Satelite. His two fathers were Coldboot and Shop, a Cybernite Lawman and Medic respectively, while his mother was eMail, a Cybernite Post Officer.

When Viral came looking for any and all survivors of the Cybernite Kingdom, eMail used her teleport powers to send Cyber Boy, her “little pixel”, to a location that was far away, and rich in data and signals, that would feed him and mask his scent, ensuring Viral would never find him.

Cyber Boy landed on planet earth in London in 1991, and was unable to find a sufficiently advanced system to function in. So he merged with a basic computer model belonging to Charlie Scrap, the first Data Boy. Years later in 2002, the now retired Scrap sold his old computer in a church jumble sale, the machine being bought by teenage genius Lee Yamashita. Yamashita managed to connect his iPhone to the computer, and the phone’s advanced system was good enough to allow Cyber Boy to function. The Cybernite infant managed to travel from the computer to the phone, and managed to materialize.

Lee Yamashita was a teenaged genius who was moved from Kyoto to Essex by his family. Lee was the one who bought Old PC at a church rummage sale, and activated him. Since then the two have been inseparable, and Lee was the one who became Data Boy, sidekick to Cyber Boy.

Felix was the grandson of Manfred "The Goon" Goon, a pugilist crime lord in the eighties. Felix was a bratty, destructive teenage hellion that terrorised his parents and neighbourhood. Until he was kidnapped by the crime lord Organ Grinder, had his eyes harvested and turned into a cyborg slave.

On his first job for Organ Grinder, he was attacked by Police Brutality, busting the chip in his head that made him a slave. With his identity back, he went on a rampage against Organ Grinder's organisation, beating on any criminal he could find in the process.

When she was young, Viola ate blackberries off of a bush that belongs to a crazy farmer near her home town. After she fell violently ill, the town superhuman found out that the farmer in question was an alien, growing alien parasites called Zlugulas in the form of blackberries. The Zlugula matured and fused to Viola's stomach, the two forming a symbiotic relationship.

The Zlugula feeds on Viola's calories, and in return generates a "Super Gas", that can be expelled as any gas Viola desires.

See The Delta Men Below

Rento was the most promising cadet for H.E.R.O., before being recruited by General Woker to keep watch over Chromazone, and be part of an elite team known as The Delta Men.

The Vigilantes are the main protagonists of Red Lightning. They are a few people who were not naturally inclined to rampage after gaining there powers. Led by Rockwell, they make it a point to try to stop the various Super-Psychos from destroying their city.

Tropes Shared by All Members 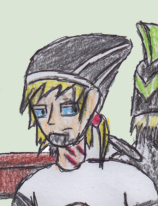 Two things are gonna happen. I'm gonna save the girl, and smash your face in. And the both happened nine seconds ago.

Thomas was given superhuman speed, stamina and reflexes by The Event, and is part of the minority left stable by it. Thomas has a strong morale fiber, which drives him to try and protect London. Thomas is a fast healer, which is largely useful because he often takes the most damage in fights. Thomas tries the hardest to balance his normal life with his super hero career as Flashpoint.

Rockwell was given the ability to turn into a larger, stronger, metallic version of himself, a form he calls Quarterback. Rockwell is largely interested in his fame and opportunity to make money of his Super Heroics, but often shows a desire to help people, or at least help Thomas. Rockwell lacks Thomas's healing ability, but compensates by being virtually indestructible. Rockwell finds it easy than Thomas to balance between his hero and normal life, but mainly because the only people he really interacts with are involved in it.

Finn is a newcomer to the country. Finn was also affected by The Event, giving him both Telepathy and Telekinesis. Finn also has a little sister, Sadie, who is a Super-Psycho. Finn was the first newcomer to join The Vigilance, and it was his death that inspired them to become The V-Team. Finn was killed in the finally of the 'Nemean Lion' arc, and was replaced by his lover, Future Fungus.

The Vigilance have accumulated a generous gallery of friends who, while not part of the core team, often help out when need be. Many were introduced in season 2.

Power: None However, when he takes a drug that gives him temporary powers, He gains Flight and Force Fields.

Ed, unlike the other protagonists, was not affected by the storm. Ed is surprisingly good at keeping his friends secret, and often finds himself in power-related shenanigans without Double-D or Eddy. Ed films his friends exploits and uploads them under his YouRoll username iJoker!.

Marie Kanker is Double-D's girlfriend. She is described as having put on weight, as Double-D and Eddy's heightened metabolisms make them eat more, so Marie has gained a few pounds because of this. Marie is kinder than when she was a child, but still "wears the pants" in the relationship. Marie finds out in Episode 6 of Season 1, and did not take well to this fact.

Hector is a member of The Bounce, a partially submerged nightclub. Hector is proven to be excitable, and is something of a nerd. Hector has the pseudonym Overload, and was given electrical Powers by the storm.

Ami and Yumi are the owners of The Bounce. They were formerly from the show Hi Hi Puffy AmiYumi, until they decided to retire after being struck by the storm, turning them into Pokemon-versions of Funny Animals. They hire the Eds and Finn, in season 2.

A Chameleon who wanted to be human, and developed shape shifting abilities by the storm. He intitally attacked the gang, picking them off one by one, but was defeated, and is released by Finn, becoming an ally.

Jamie is a girl who was possibly given the shortest end of the stick possible by the storm. She is cursed with never-ending, ravenous hunger. However, she finds happiness in the form of Eddy.

A Mysterious newcomer who works at the Bounce as a Special Effects Technician. Nathan is almost impossibly nonchalant to the insanity around him. It turns out that he's a Super-Psycho too, Who came from Lemon Brook to Chase after his Crazy Brother

A Pony from My Little Pony: Friendship Is Magic, that was created when Ed encountered a guy with a "Magic Pencil Power". She remains at the Bounce, much to Nathan's chagrin.

Kevin was given powers by the storm, the ability to stretch like rubber. Kevin is still grouchy, and when Nazz rejects him, Kevin goes berserk, using his powers to wreck a large portion of the Industrial District. Kevin loses his memory thanks to a blow to head by Eddy, and is currently looked after by Nazz. In season 2, he begins dating Vicken. His Powers come from his flexible morals.

Vicken was a girl who began to date Kevin after his amnesia altered his personality. When Nazz attempted to bully her out of the relationship, Vicken retaliated (albiet unintentionally) by using her power to snap Nazz's limbs. Vicken had the ability to sprout limbs from any surface, which was born out of her pragmatic and "hands on" nature.

The most major of minor characters, Rolf is a good friend of Kevin's, and seems to be the man who cleans up all the damage around town.

Conner is a complete sociopath and wishes to wipe out anybody not affected by the storm. Conner is always smiling, and has the personality of a young child, wishing to be friends with everybody with powers, and seems to regard a fight with Double-D as a game. He is shown to dislike discrimination for the Super-Psychos by the police. Conner has a large loudspeaker grafted to his chest, and can create devastating sonic blasts. This physical mutation has evidently made it impossible form him to live a normal life, as thunderous techno music appears to play whether he wants it too or not. Conner's power comes from his love of music.

Finn's little step-sister. Sadie was given the ability of Hypnosis, and can force people to do anything she says via eye contact. Sadie has let her power to tempt her into doing whatever she wishes, as seen when she manipulates Double-D to fetch her a large ammount of sweets. She joins Conner's gang. Her Powers come from her want for control.

AKA: The Burrowing Owl

Cameron is a Super Psycho recruited by Conner (Or quite possible, Sadie). He is some sort of hybrid between an Owl and a Human, with the ability of flight and tunnelling, making him a dangerous opponent either in the air on on the ground.

A girl who was recruited by Sadie to join the Underground. Harley is a genius with all things mechanical, especially Robotics. She likes to wear clown make-up and is often partnered with Future Fungus.

John is some kind of walking grass-man, and hails from Baltimore, from some unspecified time in the future. John can control both Plants and Time, but rarely uses the later gift. John dislikes his name, preferring to use his alias. Future Fungus.

Greg Webster is a later addition to The Underground, having earned his spot by applying for the spot. Webster can control the wind, to such a degree it can be used indoors.

Dominic is an UKA/Jamaican in his late teens. Dom went on a rampage. He was given the power to turn any part of his body to a bomb, then grow it back. His powers come from his explosive temper.

Milo is a duplicator, caught using his powers to wage a turf war on the Skinwalker Cartel. Milo has been proven "Unstable" by psychiatric tests.

Gordon has the ability to spit buzz saws, an ability deemed too dangerous for society.

Power: Can Inflate Her Fists

Elesa has the power to inflate her fists, a power she was using to extort money from her peers. Despite being a very petite and cute girl, she is actually voiced by Fat Albert.

AKA: The Sentient Pier

Power: Absorbed into the Pier

A flamboyant associate of Conner who was absorbed into a waterfront carnival, which he can control. Percy is also a living squat, as he houses the Super Psychos that have been physically mutated.

The Skinheads are a gang of local hoodlums who work for the mafia. The each receive cyborg upgrades from the mafia, and are often unfortunate victems of the storm, because Liverpudlian is a Power Magnet.

Jimmy has been pottering about on planet earth since the dark ages. He knows the most about The Fury and keeps a journal that descripts the events of the Time Dancers.

Another pony drawn by the guy with the magic pencil power. She is Pinkie Pie's best friend.

Vaughn is a so far unseen character that a few Super Psychos have encountered. He is mentioned by the Chameleon as somebody to be bewared. It turns out he's a disembodied shadow, and has so far racked up the highest body count of the series, killing off several bystanders and one reoccurring character.