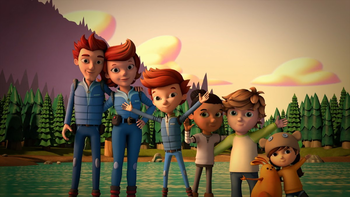 The gang's (mostly) all here!note From left to right: Carrot, Celery, Jet, Sydney, Sean, Sunspot, and Mindy. Not pictured: Face 9000
Jet, Sean, Sydney, Mindy, Sunspot, Carrot, Celery, and Face 9000, or the "Core Eight", are the main characters of the show. 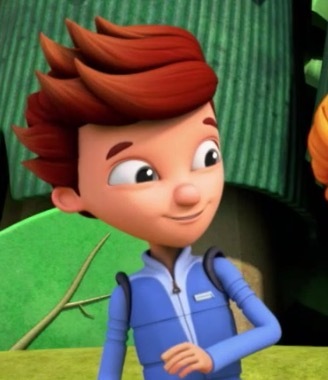 "If you try and you make a mess, who cares if it's not a success?"

The star of the show. Jet may be a typical kid for Bortron 7, but he’s extraordinary to the kids next door. Always curious and fearless, he leaps before he looks. Jet is unafraid of failure- an idea there's no word for on Bortron 7- and you can’t get him down. Like the Music Man, he might burst into a song he made up on the spot. He can build anything. Jet is endlessly delighted by our planet, which to him is huge and lush, incredibly varied and beautiful. He often points out the wonders of ordinary things to the Earth kids.
Carrot and Celery Propulsion 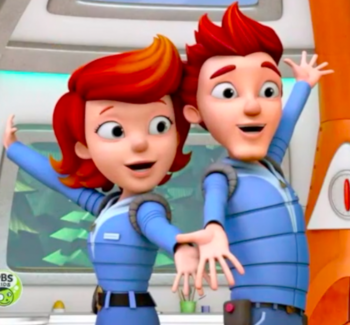 Mr. and Mrs. Propulsion (who go by “typical Earth names” Carrot and Celery) work as intergalactic travel writers, and are here on Earth for a long stay, from which they intend to file many travel stories. Like Jet and all Bortronians, they’re cheerful and fearless. As Bortronian travel writers, they follow the Prime Directive: “don’t freak out the locals.” They also tell Jet to “leave your campsite cleaner than when you found it.” However well-intentioned, though, they tend to forget to keep their alien identity a secret and keep telling people that they are from Bortron 7. Carrot and Celery tend to talk in a rather eccentric English, since they just downloaded it when they arrived on Earth. They mix up their metaphors and are always freshly learning Earth habits like shopping for food, taking care of the house, and “mowing the roof.”

It is important to note that they are one of the most positive depictions of parents you'll ever see in animation. They are loving, yet flawed, and they aren't brainless, deceased, or abusive/neglectful. 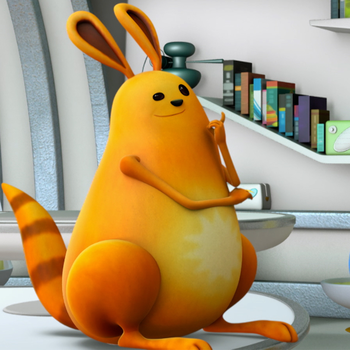 Sunspot is a Bortronian pet, a kind of cross between a dog, cat, rabbit and raccoon. While he doesn’t talk, he likes to imitate the sounds of various other animals. He also makes sound effects, so he’s like Gerald McBoing-Boing. He’s a pantomime like Harpo Marx, with Snoopy’s rich inner life and R2-D2’s independence. He’s usually way ahead of what the kids are doing, thinking, or realizing. He is good at everything. Sunspot usually plays the instruments in Jet's songs.
Face 9000 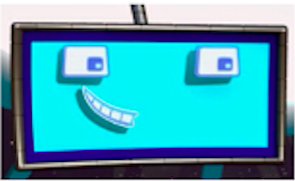 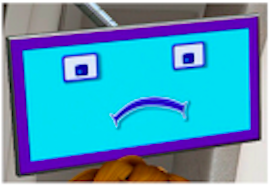 Face 9000 is a computer. He often pops up to answer the kids' science questions. 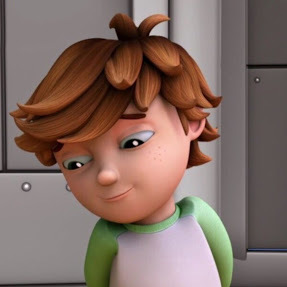 Voiced by: William Ainscough (season 1, season 2 until "Our Sun Is A Star!"), Grady Ainscough ("You Can Call Me Albedo" to "Moon Face"), Glen Gordon ("Lone Star 2 - Rocket Kids!"-present)

Sean, the son of scientists and astronauts, figures he’s going to grow up to be a great scientist himself and plans to lead the first mission to Mars. But he's afraid of heights, fears cramped spaces, and easily gets space-sick - things he's trying to overcome before he grows up and becomes an actual astronaut. Sean’s the practical one, always insisting on doing things the old-fashioned way – even though he’s now suddenly hanging out in a very sci-fi reality with Jet! Sean’s a big fan of following the rules of the Scientific Method, which he sings about in his own song.
Sydney Skelley 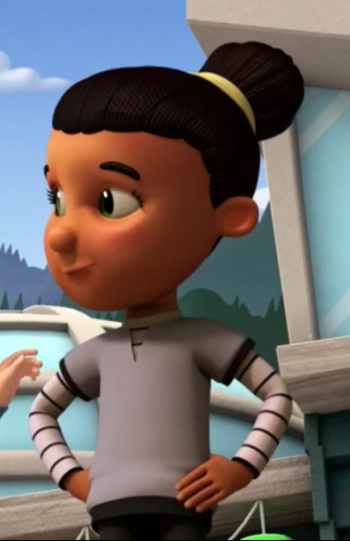 Sydney is the “sci-fi kid.” She loves sci-fi stories – ANY kind of story, in fact- but especially a multi-platform series, “Commander Cressida”, about a fearless female spaceship captain. Sydney is all about using her imagination. She represents the power of imagination in science – the person who asks “what if?” She knows that science-fiction ideas have inspired many technological innovations and advances and that scientists are as inspired by what they saw on Star Trek as anything in a scientific journal.

Sydney's mom is a robotics engineer who works at the DSA. 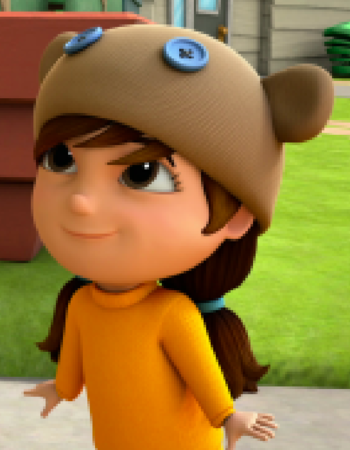 Mindy lives across the street and is always coming over to see what the bigger kids are doing. Mindy is 4, so she asks the real questions that 4-year- olds ask about space. The answers to the these questions are often what the episodes are about. She's not always in possession of the facts and is still a magical thinker. To her, the phases of the Moon mean that there are “a lot of moons, like the round fat one, and the one shaped like a taco, and the skinny, pointy one."

In the season 2 episode, "Mindy Turns Five", she turns five and gets to go to space.