open/close all folders
Tropes applying to Sima clan in general
The Sima clan are a clan of wealthy merchant who exploit the war to make a profit. As of the beginning of the story, the clan defers to Sima Yi's insight to plan their moves and are very successful in their commercial endeavors. The Sima also employ the Crippled Legion as their squad of assassins when they want someone dead. Unfortunately for them, the Sima clan is forced to be attached to the Cao clan and are eventually massacred by Cao Cao's men.

Sima Yi's three uncles and brothers to his late father Sima Feng. Although they're the elders and technically the family leader, by the start of the story they'd relegated much authority to their most talented nephew.

Sima Lang
Sima Yi's older brother. He was the Imperial Book-keeper in Luoyang before Dong Zhuo sacked the city and held relatives of powerful familes, including him, hostages.
Sima Yi 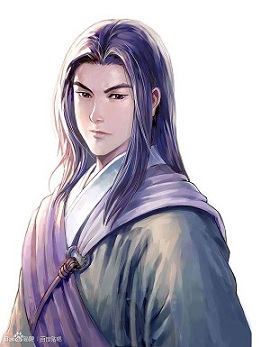 "The world is filled with evil, and fighting it is like hitting a rock with an egg. Years of war would only bring misery to the living. It may be better to help the strongest power to conquer the world, then after a speedy restoration of peace, take over the reign."

The head of the famous merchant clan Sima, and also the strategist behind every success of its assassin squad, the Crippled Legion. He's not interested in taking the side of any warlords, and only makes a move when it gives his family a new business opportunity. With Liaoyuan Huo, his schemes behind the scene have been crucial in many major wars, and have caused some others, between warring states, even though historically it will not be tens of years later until Sima Yi makes his first appearance. However, the interferences of other schemers on the scene make it inevitable that he soon will have to take a permanently active role in the conflicts of this era. After his clan is exterminated during a mutiny against Cao Cao, he finally joins Cao Cao's side to plead impunity for the remaining members of his family. His true goal is, however, to help Cao Cao defeat all other warlords, and then seize power from him.

It should be noted that he is the implied 'phoenix' in the series title, a fact several times lampshaded in the narratives.

Sima Min
The youngest in the Sima family. A baby at the beginning of the story, he later becomes and the mastermind and leader of the New Crippled Legion, palying the same role as Sima Yi did years before.

Tropes Applying to The Crippled Legion in General
The most famous - and widely reputed to be the most fearsome - assassin squad of the current age, placed under the control of Sima clan and Sima Yi. They consist of handicapped fighters, who weaponize their handicaps and take advantage of the fact that people tend to underestimate the disabled to carry out their missions, with a success rate close to 100%. Their leader is the notorious "one-eyed leader", most recently Liaoyuan Huo. Other members are Guo Ang (whose handicap is an amputated arm), Zhang Lei (whose handicap is an amputated leg), and Xiao Meng (who is an eunuch). Another is San Chuan, a mute assassin who rarely appears.

They were partially disbanded after Xiao Meng went MIA during a mission and Liaoyuan Huo left to find him, then ended for good upon Guo Ang's death and Zhang Lei losing his other leg during the Sima clan extermination, Xiao Meng's death in Xiapi and Sima Yi subsequently tasking Liaoyuan Huo with instead being his mole in Liu Bei's camp... only for Liaoyuan Huo to adopt that identity for good. San Chuan remains at Sima Yi's side and is seen carrying out some more hits for Sima Yi in Guandu arc. 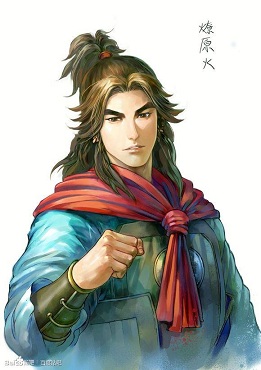 "I wait for the moment the fiery phoenix scorches the plains."

The young leader of the Crippled Legion and a friend to the Sima clan's young head, Sima Yi. Liaoyuan Huo is an assassin with prodigious fighting skills and an unique handicap that makes him one of the strongest warriors in the story. Unlike the amoral Sima Yi, Liaoyuan Huo is a very righteous man who values justice and, despite their strong friendship, hates Sima Yi's indifference to the world's chaotic state. He's also discontented with the life of an assassin, but nevertheless stays unwavered in his loyalty to the clan and commitment to his comrades, whom he treasures. The 'fire' that 'scorches the plains' (the three characters 火 'huo' and 燎原 'liao yuan') in the series title refers to him.

He's also Zhao Yun, later to be one of the Five Tiger General of the kingdom Shu led by Liu Bei. Following the destruction of Sima clan, he serves Liu Bei as a part of Sima Yi's vengeance plan on Cao Cao - to help Sima Yi create the strongest enemy possible for Cao Cao, so that Sima Yi can have a chance to rise to prominence through proving himself in campaigns and overthrow Cao Cao in the end. 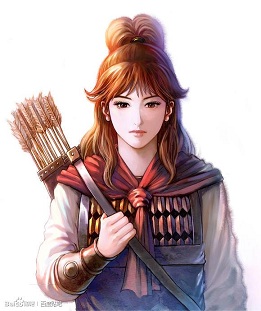 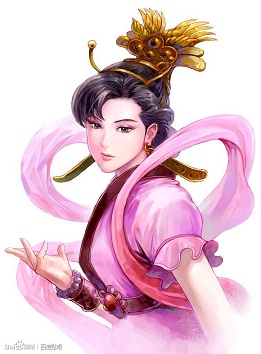 "Call me a girl and I will kill you."

The archer of the Crippled Legion and an eunuch. His feminine beauty gives him great advantage when acting as a spy, but he's very sensitive about it and reacts violently to whoever touches upon the subject of his gender. It was during a mission to spy on Dong Zhuo that he adopted the name 'Diao Chan', thus linking his existence to one of the most famous women (although fictitious) of Chinese history. Like Liaoyuan Huo, Xiao Meng considers the other Crippled assassins his family and cherishes not-so-brotherly affections for Liaoyuan Huo.

He went MIA during a mission, and ended up in Lu Bu's camp. Manipulated by Lu Bu to assassinate Cao Cao in accordance with Pang Tong's scheme, Xiao Meng, together with Liaoyuan Huo, unwittingly brought about the Sima clan's demise at the hands of Cao Cao. Desperate for vengeance, he aided Lu Bu in resistance to Cao Cao's Xuzhou campaign, and when Lu Bu failed, proceeded to again make an attempt on Cao Cao's life. Due to Sima Yi's betrayal, he failed and was subjected to a brutal execution, but a glimpse of foresight at Sima Yi's long-term sheme just before dying allowed him to rest in peace. However, his death greatly aggravated Liaoyuan Huo and enlarged the rift between him and Sima Yi, which ironically was the very opposite of his dying wish. 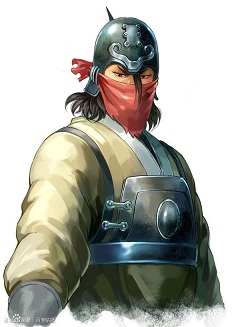 One of the top assassins of the Crippled Legion. His particular handicap is that he's missing a leg, which he's replaced with a blade. Nevertheless, he's remarkably agile. 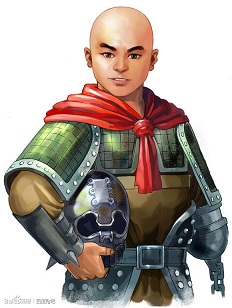 Guo Ang is one of the top assassins of the Crippled Legion. His particular handicap is that he's missing his left arm. However, he's chained a giant iron ball to his stump and is extraordinarily strong.
San Chuan
Sima Yi's personal bodyguard. A deaf-mute warrior who carries a Japanese sword. 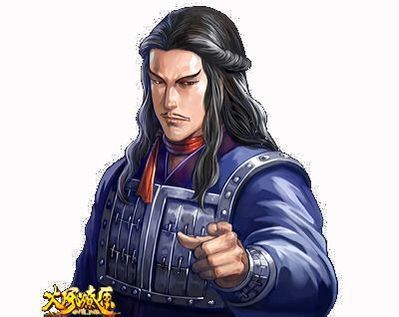