open/close all folders
Tropes Applying To The Eight Geniuses 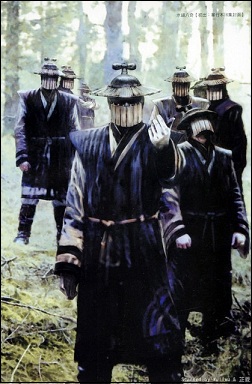 The eight genius military advisors who are students of Sima Hui 'Shuijing' (commonly translated as 'Water-Mirror'), a famous teacher who educated many famous strategists in the previous decades. Their abilities far surpass the common men of this age, and thus their service is much sought after. Whichever warlord faction, no matter how diminutive, is chosen by one of the Eight will soon become a competitive force in the race to conquer and unite China. Once a Genius has chosen a lord, he will take off the mask and uniform (which was designed identically with the purpose of hiding their respective identities) and leave the school.

So far the revealed Geniuses are: Yuan Fang, Xun Yu, Jia Xu, Guo Jia, Zhou Yu, Pang Tong, Zhuge Liang. The Eighth has made very few appearances in the series, and his identity has fueled much fan speculations. Of the Eight, five have picked a master: Yuan Fang who serves the Yuan clan; Xun Yu, Jia Xu and Guo Jia who serve the Cao clan; lastly Zhou Yu who serves the Sun clan. The Sixth Pang Tong and the Seventh Zhuge Liang have expressed their approval of a lord (Liu Bei) but only the latter has joined up, though they are both collaborating with Zhou Yu on what will become the Battle of Chibi.

Below are tropes applied to the Eight Geniuses: 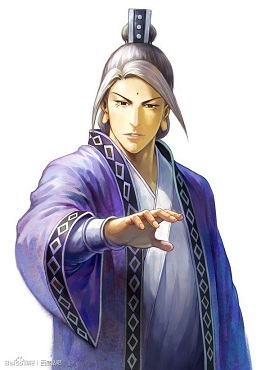 The lone crane prefers the peace of seclusion; how could he be heard across the heavens…

The First Genius. A member of the prominent Yuan clan, Yuan Fang's primary goal is to expand his clan's territory in the north, and acts as First advisor to the clan leader Yuan Shao. He is Yuan Shao's illegitimate son, but since his brilliance far surpasses his three half-brothers (Yuan Shao's legitimate sons), Yuan Shao inwardly acknowledges Yuan Fang as the true heir and spares no efforts to strengthen his position within the clan; he even kills Yuan Fang's childhood sweetheart to force him into a marriage he wants no part of. Although Yuan Fang never truly forgives his father for this, over the years he starts to relent to Yuan Shao's plans, and gradually manifests the ambition to take over the clan and overthrow Imperial Han. The course of the story also observes Yuan Fang's transformation into a ruthless man unhesitant to eliminate anyone in his way, even his former classmates.

He was killed at the end of the Battle of Gushi vs. Cao Cao (year 200) by Yang Qing, a confidante who turned out to be Yang Xiu, Guo Jia's mole and the son of his father's former political rival. Shortly after, Cao Cao and the three Geniuses concealed his death and disposed of his body in secret, thus further aggravating the situation on Yuan side as they were left with no competent leader and uncertainty over Yuan Fang's fate. The truth did not reach Yuan Shao until 202 and his close subordinates some times later, and by then his faction had mostly dissolved. 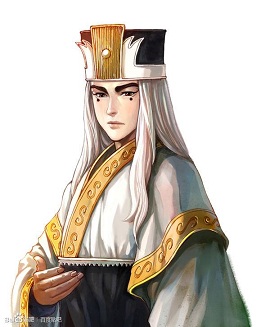 "With my guidance, an anti-hero would only be Imperial Han’s most loyal minister."

The Second Genius. Xun Yu's true strength is diplomacy, but he's as well-versed in warfare as any of the other Geniuses. From the beginning days of Cao Cao's faction, his benevolent ministry, as opposed to Guo Jia's 'Darkness Ideology' in military affairs, has helped fortify Cao Cao's rule. Thus stems his nickname, 'Zhang Liang', a homage to a famous advisor who aided Liu Bang in the construction of the Han dynasty.

Unlike Guo Jia and Jia Xu, the two Geniuses whose aim is Cao Cao's eventual rule, Xun Yu works toward the restoration of Imperial Han. Believing Cao Cao to be the only one able to achieve this, Xun Yu pledges his loyalty to him, even after Cao Cao's ambitions manifest in Guo Jia's favor. Xun Yu's greatest feats to date are the recruitment of thousands of Yellow Turban's troops and the Emperor's capture, both of which have contributed monumentally to Cao Cao's faction, elevating him to the status of most influential warlord of the land. 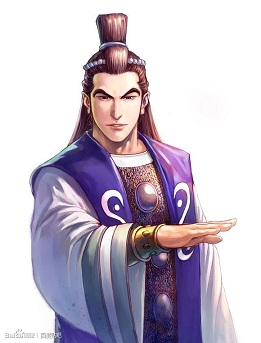 "Darkness precedes the light of dawn."

The Third Genius. A friend of the Fourth Genius Guo Jia, Jia Xu is a fervent believer in the 'Darkness ideology', the belief hailing actions of utmost cruelty, rather than of benevolence, as the ultimate mean to pave way for peace and prosperity. This causes his rupture with the way of justice Shuijing taught, which he deems obsolete, and his premature graduation from the school of Shuijing. He has a positive opinion of ruthless and cunning warlords who have the will to wage wars to bring peace to the people.

During the course of the story, Jia Xu has served various lords. He was particularly loyal to Dong Zhuo, the Imperial Prime Minister whose inhuman reformist method was the closest to his ideal. After Dong Zhuo died in Lu Bu's usurpation, Jia Xu joined forces with Dong Zhuo's son-in-law Niu Fu and successfully overthrew Lu Bu. Since then he's expressed the intention to join Cao Cao and secretly kept in touch with Guo Jia, but still stayed with the remnants of Dong Zhuo's faction and then Zhang Xiu. When Cao Cao's expedition against Lu Bu began, Jia Xu returned and played one of the vital roles in Lu Bu's eventual elimination. 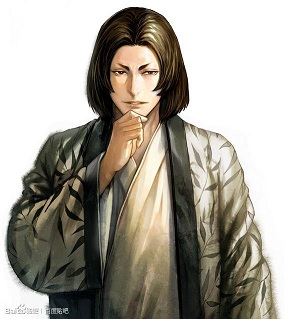 "If you want a revolution, why care about what the world thinks?"

The Fourth Genius. He's praised as the 'King of strategic decisions', a nod to his ability to account for virtually every scenarios possible in his plans. Like his close friend Jia Xu, Guo Jia is also a proponent of the 'Darkness ideology', which hails actions of utmost cruelty, rather than of benevolence, as the ultimate mean to pave way for peace and prosperity. This, while perpetuates his fame as Cao Cao's 'darkness', also strains his relationship with his upperclassman and comrade Xun Yu.

Much to Guo Jia's despair, he is afflicted with a terminal illness (possibly tuberculosis) which dooms him to a premature death. Guo Jia has long since resigned himself to fate, reluctant to enter anyone's service, until Jia Xu persuades him to join Cao Cao, a warlord they both deem worthy of serving. As Cao Cao's right-hand-man, he plays a vital role in expanding the influence of Cao faction, which grows vigorously and quickly equals that of the Yuan clan.

He finally succumbed to his illness and died in 207, by then having already fulfilled his wish of annihilating the Yuan clan and uniting the North for Cao Cao. 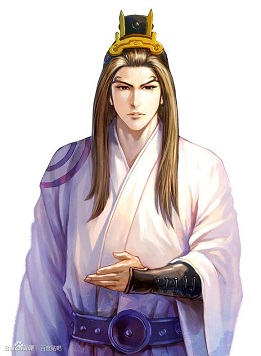 "Heaven is not dead. He is just forging a magnificent clan."

The Fifth Genius. Of all the Geniuses to have made an appearance, Zhou Yu's goal strays the furthest from their common ideal: rather than striving to bring peace to the land, he pledges loyalty to his sworn brother, Sun Ce, and dedicates his genius to the resurrection of the fallen Sun clan which may or may not imply his intentions to found the future Wu kingdom independent of Imperial Han. For this, he's disliked by the Seventh Genius Zhuge Liang, who likens him to Sima Yi, another man of staggering brilliance but seemingly without noble ambitions.

Zhou Yu's strength lies in troop deploying and counter-espionage, the later of which was the basis for his ingenious scheme to turn Yuan Shu's men against each other, tremendously diminishing Yuan Shu's force. With his aids, Sun Ce was able to escape safely to the Eastern region and embark on his conquest to regain the old glory of his family. As of now, the Sun clan has essentially unified the land east of the Changjiang (aka the Yangtze River) and by the prelude to Chibi has joined the fray as a still-rapidly rising power. 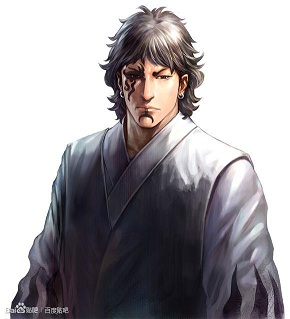 "Strategy, as they say, amounts to only one type."

The Sixth Genius. With his extraordinary power of devising chained strategems, he's hailed as the 'Fledgling Phoenix' (鳯雛; Fèngchú), one of the two titles conferred on the best of the Geniuses only (the other being 'Crouching Dragon', conferred on the Seventh Zhuge Liang). Regardings his principles, Pang Tong is considered a ruthless utilitarian whom even Jia Xu considers himself inferior to. He's close friend with Zhuge Liang, who shares his dream of restoring the era of Imperial Han and yet seems to advocate more benevolent methods. Thus, people believe that he favors Liu Bei but he actually supports Liu Chong, a more powerful warlord also related to the Imperial family. The chain stratagem he sets up upon joining Liu Chong, which involves several prominent warlords in a surprise all-out extermination of Cao Cao's faction, soon pushes Cao Cao into deadly predicaments and nearly claims his life. This also brought about the demise of the Sima clan, marking one of the most significant plot development in the story. After Liu Chong was assassinated by Sima Yi's assassin, as of now he prefers to stay out of the power struggle and observe the going-ons. Still, Liu Chong's death and a private talk with Liu Bei made him change his opinion, and he seems to support Liu Bei now. 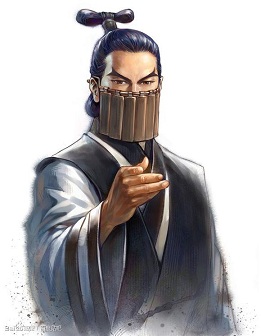 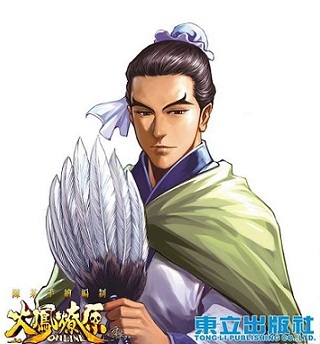 The Seventh Genius, holder of the prized title "Crouching Dragon" and supposedly the best of the Eight. He's shown to be an upright individual who places great ethical value in loyalty and patriotism, and holds like-minded men like Liu Bei in very high regards. His stated goal is to restore the rule of Han, which he sees as an exemplary act of anti-segregation made for the sake of future generations. Due to his dissatisfaction with the way selfish warlords ruin the country with civil wars, he has declined to choose a master and opted to live as a reclused teacher in Shuijing's military school.

The last of the Eight Genius. There has been much debate over who is the last Genius, and theory abounds. So far the things we know for certain about him are:

Which severely shortens the list of tropes we can attribute to him to: