A page dedicated to the most prominent races featured throughout the Ratchet & Clank series.

The Lombaxes
Ratchet's species, and the most important race in Ratchet & Clank lore, having been given particular focus throughout the Future trilogy.

While plenty of information about Lombax history or society is still a mystery, what is known is that they were a desert-dwelling feline-like species from the Polaris planet of Fastoon, and were well-known for their invention and engineering skills. Eons before the events of the series, when the Cragmites had conquered almost all of their galaxy, the Lombaxes rebelled against their tyranny with competence, starting a conflict that would come to be known as the "Great War". Eventually, a device only known to the galaxy as the "Lombax Secret" was developed, and the Cragmites effectively disappeared from the cosmos overnight as a result. For their accomplishment in ending the Cragmite scourge, the Lombaxes were heralded as heroes across Polaris.

However, years before Ratchet and Clank's first meeting, the hard majority of the Lombax race also disappeared from the cosmos as a result of the actions of Percival Tachyon, a remaining Cragmite who enacted revenge on them for seemingly wiping out his species during the Great War. As of Into the Nexus, only two named ones are still alive: Angela Cross (who likely joined the Lombaxes in their dimension) and Ratchet himself.
Robots
While moreso an umbrella term than an actual species, robots beyond Clank have also been prominent throughout the entire Ratchet & Clank series.

The Blarg, as they appear in the re-imagining.

A Solanan species whose homeworld of Oxorn (or Quartu in the re-imagining) was too polluted to live on. Under Chairman Drek's command, they took chunks from other planets to build the perfect new homeworld. It is unknown what happened to them following his defeat, though as of Deadlocked the original Orxon appears to be more inhabitable. 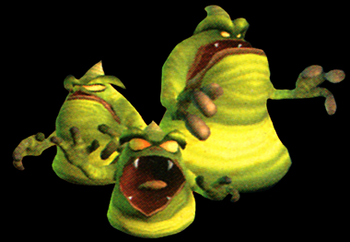 Mutant creatures that were created by Dr. Nefarious in an attempt at wiping out all life on Rilgar. They were released in its capital of Blackwater City, but beat back by the Extermibots and Captain Qwark, and later Ratchet. They now reside in the Aquatos Sewers, going "Blagh!" to their heart's content. 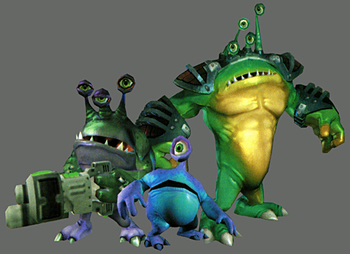 An aggressive and oddly amphibian-like race of aliens from the aptly-named Solana planet of Tyhrranosis, and a common enemy type in Up Your Arsenal, having been hired by Dr. Nefarious as extra fighting forces for his personal army. 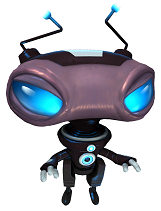 "Whee!"
Hyper-intelligent and enigmatic little creatures known for traveling through time and space, with a strange connection to Clank. Their history and relevance to the series' lore is greatly fleshed out in A Crack in Time, with Clank himself revealed to be harboring a Zoni soul.
Cragmites
Drophyds 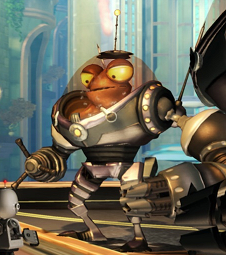 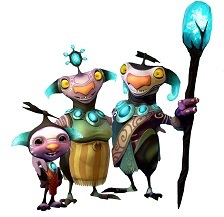 Ratchet & Clank: Into the Nexus