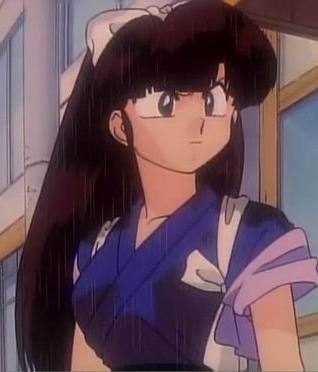 The last of Ranma's fiancées to appear, Ukyō is the victim of a childhood crush gone horribly wrong. She and Ranma met when they were both children, with Ranma regularly dueling Ukyō in exchange for okonomiyaki. She developed a crush on him, and for his help in swiping the family's special okonomiyaki sauce recipe and mixing it, she made him a Childhood Marriage Promise... which he didn't understand what he was promising, ended up accidentally sabotaging, and ultimately would forget about. Then, her father saw how fond his daughter was of Ranma and made a betrothal pact with Ranma's father... except that Genma betrayed them by stealing Ukyō's dowry and running off with it.

Believing Ranma had been in on this humiliation, Ukyō swore revenge and began crossdressing as part of an elaborate vow, tracking Ranma down with the intent of making him pay for deceiving her... only to discover it had all been Genma's fault, and Ranma was never even told about the engagement. Between this, the fact she was still in love with him, and the fact Ranma evidently found her attractive despite the crossdressing, Ukyō believes she has a legitimate chance at winning Ranma's heart, and calls off her revenge to instead try and woo him to her. Generally the nicest of Ranma's fiancées, but she has her ugly side too and can use threats, destructive ambush-beatings, or manipulation when she feels it's called for. It's worth noting that she is the only fiancée who always regrets manipulating the others.