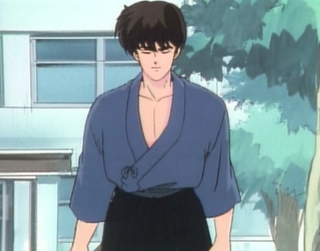 Originally the greatest champion of Furinkan High, until Ranma Saotome arrived. He does remain its greatest pervert, though. A pompous, bombastic scion of a noble house, his father is the principal of Furinkan and this, coupled with his skill, makes him someone of importance in school. Caught up in his own ego and almost delusional obsessions with the samurai, he blatantly lusts after Akane Tendo — and doesn't lose any interest even when he finds himself also smitten with a mysterious "Pigtailed Girl" (Ranma's female form), making no secret that his ultimate desire/intention is to have them both as his wives. That neither of them is even attracted to him, never mind happy with the idea, is something that doesn't register. 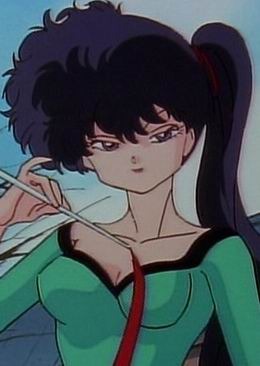 Tatewaki Kuno's younger sister, whose revelation of kinship is only made in her second episode/chapter. The self-proclaimed "Black Rose of St. Hebereke Girls High School", Kodachi Kuno is a master of the fighting style "Martial Arts Rhythmic Gymnastics" and, while her general skill level may only be about the same as her brother's, she's a ruthlessly pragmatic fighter who is completely willing to use poisons and cheating to overcome her foe. Like her brother, she is unaware that Ranma Saotome is a Gender Bender, but in her case that's because she's only seen Ranma transform once, in a situation where the switch could have been a variant of the Ninja Log, and no attempt has been made to explain it to her (unlike her brother). She fell obsessively in love with Ranma after he saved her from falling off of a roof, though he was the one who knocked her off in the first place, and refuses to let his reluctance to be near her and her lack of an official tie to him keep her away. 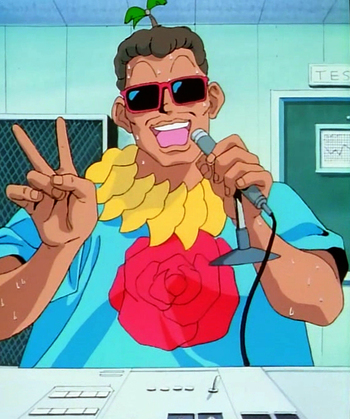 The headmaster of Furinkan High School, and father of Tatewaki and Kodachi, this strange man abandoned his family for an extended vacation in Hawaii, coming back as what can essentially be considered a compound of the "obnoxious tourist" archetype and the stereotypical Hawaiian. Obsessed with cutting hair and short haircuts, delighting in making his students hate him and fight against him, Principal Kuno frequently throws his school into chaos to amuse himself.