Characters / RWBY: The Creatures of Grimm

Enigmatic beasts that have antagonized humanity since their inception. With the power of Dust, humanity was able to fight back and contain the Grimm. Four Kingdoms now flourish, acting as a safety net for humanity. The Grimm continue to exist on the outskirts of the Kingdoms and thrive in the wilderness, a constant reminder that to travel outside the Kingdoms means risking life and limb. 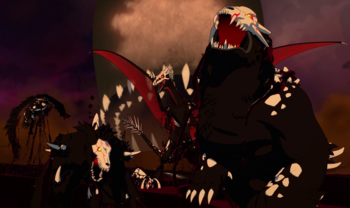 There are unique Grimm that look nothing like the more common Grimm that are normally encountered. Such unusual Grimm have their own quirks and abilities that make fighting them a different kind of experience.

An unusual aberrant Grimm that attacks Ruby and Blake at the Schnee Manor.

Debut: RWBY (2015), Chapter 10 * The very first manga series produced for RWBY, also titled RWBY, was described by the show's creators as "canon until it's not", with certain events being further confirmed during interviews or DVD commentary.

A Grimm that looks like a giant skull with multiple tentacles sprouting from it. In RWBY (2015), it initially appears when Roman is investigating Mountain Glenn. 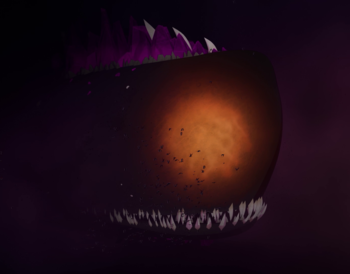 A titanic flying whale serving as the "flagship" of Salem's forces during her assault on Atlas. 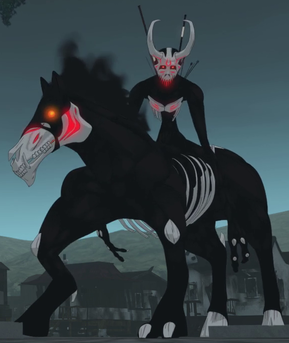 A Grimm that combines elements of both human and equine creatures. It destroyed the village of Kuroyuri during Ren's childhood, and still roams the wilds around the town's remains. Based off the demon of the same name in Orcadian mythology 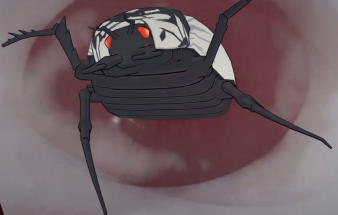 A miniature beetle-shaped being that bears the red eyes and black-and-white marks of the Monsters of Grimm. It appears to be summoned using a special glove, and Cinder uses it to steal Amber's powers, the parasite being responsible for the actual power transfer. 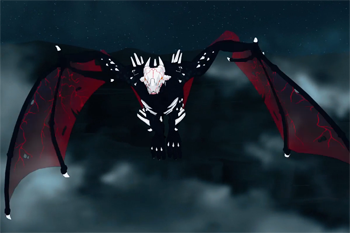 A massive draconic Grimm living in the peak of a mountain outside of Vale. When the Grimm invade Vale in Volume Three, the chaos and negative emotion awakens it, and it breaks free to attack the Kingdom.

Some Grimm are not created naturally, as much as the word can apply to creatures like them, but created through the meddling of mankind.

Due to those unnatural origins, these folders can contain large, unmarked spoilers. 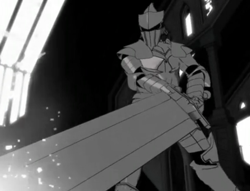 During the White Trailer, Weiss fights a giant, heavily-armoured mediaeval knight. The fight is the origin of the scar she carries over her left eye and also the White Knight that she can summon with her Semblance to protect her.

The first manga, RWBY (2015), reveals that this is in fact a special kind of Grimm that was created specifically for the purpose of testing Weiss's ability to prove to her father that she was capable of attending Beacon Academy. A number of small of Grimm were fused together that were capable of possessing inanimate objects. It's the only known type of Grimm to be created by humans.

The Volume 4 director's commentary confirms that the Arma Gigas is canon, and that it is a Geist variant. 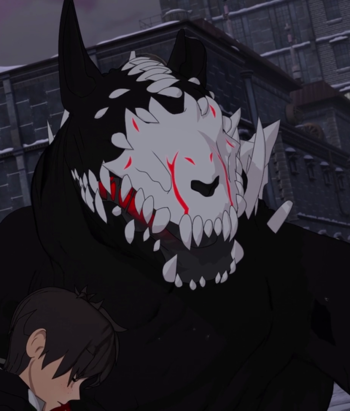 A hound-like Grimm created by Salem as an experiment. She sends it after anyone she wants captured alive for interrogation.

A subset of Grimm featured in the video game RWBY: Grimm Eclipse. They are more powerful than the standard versions, but the mystery is where they're coming from and what's behind their existence.

A wide variety of Grimm exist, but many of them can be grouped into classes that identify the appearance, behaviours and abilities of all Grimm that fall into that grouping. 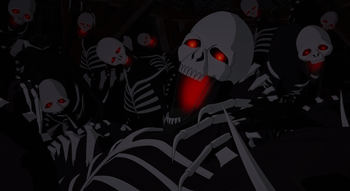 I'm tired...
"The Apathy. They're not strong or ferocious. They drain your will to go on."

Zombie-esque Grimm that infest the waterways beneath Brunswick Farms. Though slow and not very strong, they possess the unique ability to drain those around them of their will to live.

Jet black werewolf-like Grimm. They fight Ruby in the Red trailer. In the Red Trailer, the Beowolves appeared as black wolf shadows with red teeth, because Monty was working on the trailer by himself. Patrick Rodriguez, one of the concept artists and character designers for the series, later redesigned the Beowolves (see the picture to the right) making them look more fitting for a creature of Grimm. 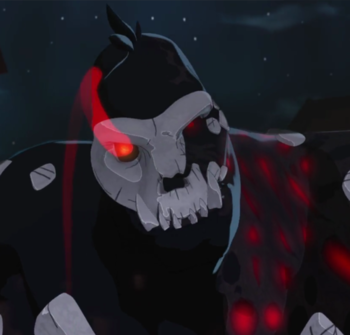 A large gorilla-like Grimm first seen fighting Ruby in the Volume 4 Character Short. At the end of Volume 6, a group of new winged variants of Beringel were created by Salem to aid in her war against Ozpin.

Blind Worms are one-eyed, segmented worms that live beneath the desert lands of western Sanus. Their enormous size, ability to generate dust storms with their movements and habit of attacking from underground make them the deadliest Grimm in Vacuo.

Debut: The Badge and the Burden* Volume 1 Episode 9 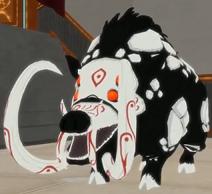 Wild boar-like Grimm. It made its action-packed debut in Episode 10. 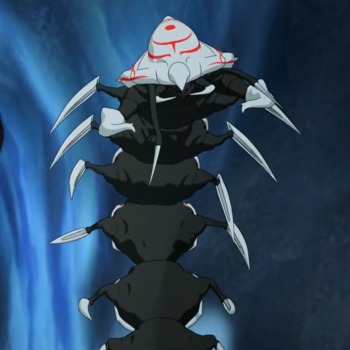 A Grimm that is only found in shadows and can possess its victims with just the slightest touch. Most people will never survive an encounter with these Grimm, and they are a favourite monster for Remnant's horror genre as a result. 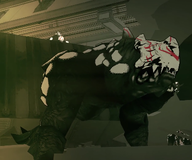 A bestial Grimm with a very little neck and a stunted snout. It has two limbs that act as legs and end in large claws and also possesses a long tail. It has no direct animal counterpart.

A camel-like Grimm that is found in the deserts of Vacuo. It is first introduced in the canonical light novel, RWBY: After the Fall. 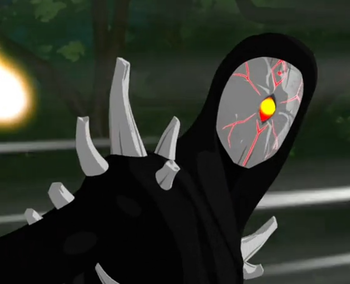 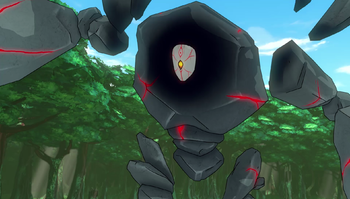 A frail, ghost-like Grimm with the ability to possess inanimate objects. They take on 'gigas' names that are based on what they possess. A Petra Gigas is a Geist that is possessing rock, including Dust. Older, smarter Geist will take over the regions they move into, becoming the local 'alpha'. 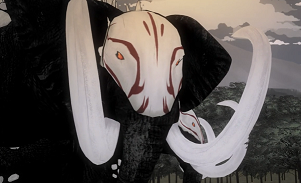 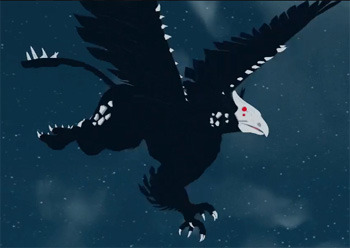 A dangerous hybrid Grimm that is found in the deserts of Vacuo. It is first introduced in the light novel, RWBY: After the Fall.

Giant snake Grimm premiering in Episode 6 in the Emerald Forest. 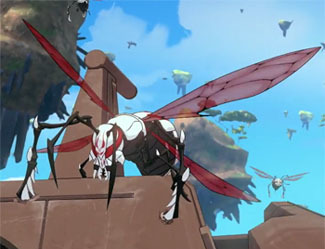 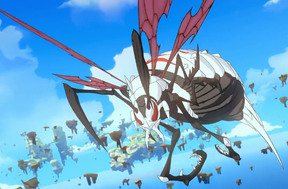 Queen Lancer
These insectoid Grimm resemble large hornets and nest on the floating islands of Lake Matsu, preying on any flying vessels that pass by.
Leviathan 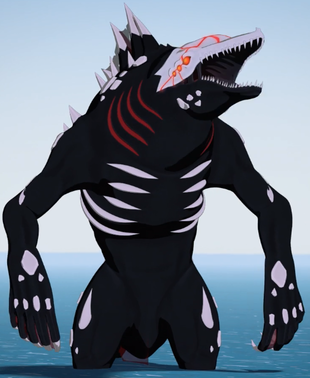 A massive sea-faring Grimm lurking off the coast of Argus. It emerges from the sea to assault the city while the heroes and Cordovin are busy fighting each other for an airship.
Manticore 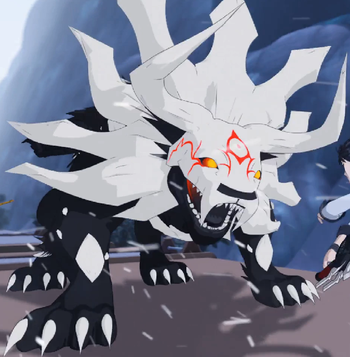 Flying horned Grimm that share the features of lions and have scorpion tails. A pack led by a Sphinx attack the group on a train headed to Argus. 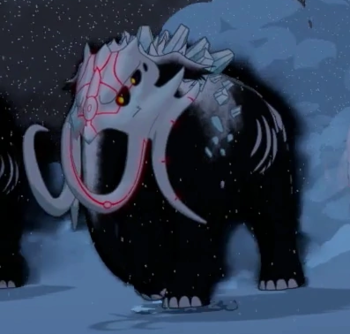 Huge elephantine Grimm that are native to the ice and snow of Solitas. Their black bodies have a shaggy coat akin to a woolly mammoth. 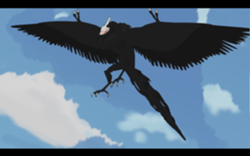 Avian Grimm. Debuted in Episode 8, when Team RWBY fight a giant version of it.

Debut: RWBY Fairy Tales of Remnant: The Warrior in the Woods

Huge black owl-like Grimm that are first introduced in the canonical RWBY: Fairy Tales of Remnant. 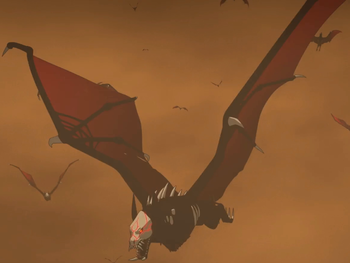 Ravagers are huge flying bat-like Grimm that are first introduced in the canonical light novel, RWBY: After the Fall. They replace Nevermores in the deserts of Vacuo.

A type of Grimm found on Solitas that looks like sabre-tooth cat. 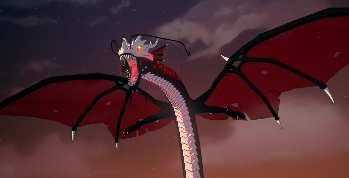 A sea-dragon Grimm that prowls the waters of Remnant. Blake and Sun encounter it on a boat to Blake's home on Menagerie. 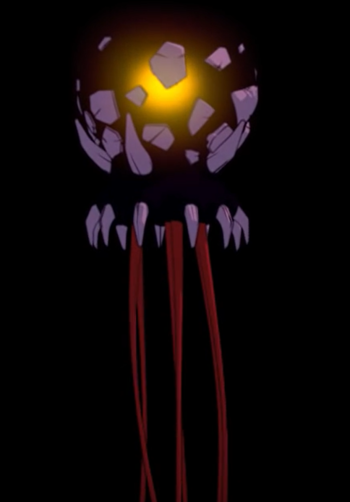 A jellyfish-like Grimm that Salem seems to use to communicate with other Grimm forces, such as the ones occupying Beacon. 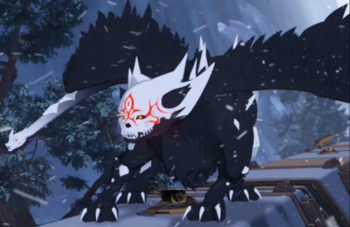 Debut: As Above, So Below* Volume 7 Episode 9

A large dragon-like creature native to Solitas; it has the body of a bipedial dinosaur, with forelimbs that are slightly smaller, but still useful. It has large, membranous wings and spils on both the nape of its neck and at the end of its tail. It attacks mainly with its teeth and claws.

Bear-like Grimm first appearing in the Emerald Forest in Episode 6. It is later revealed that there are larger Ursai in the world, and a large one, the Ursa Major, was seen living in the Forever Fall forest.

Huge, three-headed, giraffe-like Grimm that are first introduced in the canonical light novel, RWBY: After the Fall.