Character sheet for Princess Waltz. WARNING! ALL spoilers are UNMARKED!

The hero of the story, who winds up accidentally involved in the Waltz after picking up the ring Chris dropped and putting it on. He quickly adapts to the Broken Masquerade, and is able to sync powerfully with Chris until The Reveal, whereupon the two of them run into trouble fighting together because of Arata's new awareness of her sex. The two of them spend a great deal of time training, but synchronization has its own side effects and the two begin getting uncomfortably close.

The Crown Prince of Eldhiland
The Crown Prince of Eldhiland, and the main love interest of the story. Chris transfers to Arata's school one day, has all the girls in an uproar over his handsomeness, and accidentally drags Arata into the Princess Waltz when he drops one of his rings, only for Arata to put it on. After a great deal of arguing and heroic stupidity, the two of them decide to team up, and realize that together they are capable of transforming into the super-powerful princess of the sword, Iris.

Chris is very hung-up over his princehood, and is fighting in the Princess Waltz for reasons that Arata does not immediately grasp. As the tournament proceeds, it's revealed to the player that Chris has deep insecurities that stem from the fact that he is unable to properly inherit the throne, due to being born female. 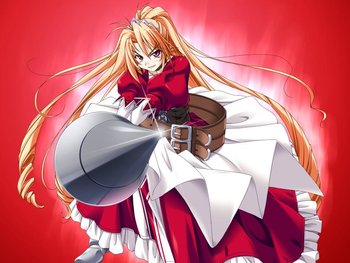 Princess of Agnis
The Princess of Agnis, who entered the Princess Waltz just to have fun fighting. She's rather bloodthirsty and enjoys battle more than anything else, and expresses no interest in Chris, even though that's the goal of the tournament. She's known as the Dragon Princess among the others, and is a very formidable opponent; she wields a burning lance called Perpetuelle.

Angela is noted for being hard to get along with and tends to blatantly ignore her adviser, Glen, but when the mood strikes her she can be very kind. She also has a bad habit of throwing vast amounts of money around, and abusing her special status as a princess when she shops. 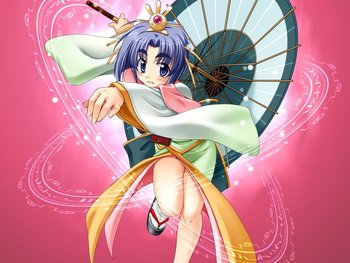 Princess of Shihou
The young Princess of The Earth, who hails from the country of Shihou. She has known Chris since they were young children and has devoted herself entirely to Chris, being more intent on becoming his wife than any other princess, although she doesn't know about Chris' true biological sex. Once she arrives in the story, she initially gets along well with Arata before growing jealous, a trait which marks her behavior with the other princesses as well.

Contrary to all expectations as she's quite a small girl, Suzushiro holds massive physical strength to compensate for her mediocre speed and poor defenses. 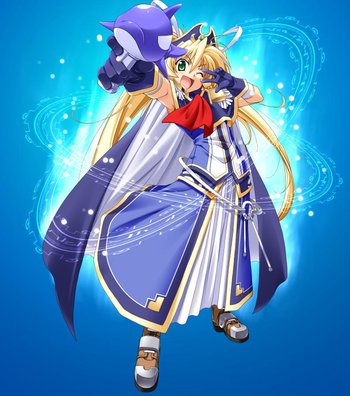 Princess of Renstanza
The Storm Princess of Renstanza, a mighty naval power. She is an Admiral of their Navy. While not the oldest princess of her kingdom, she's the only one who is eligible, which is why she entered the Waltz. She is also motivated by her irritation with her sisters for settling for anything other than a prince when they married. She spends most of her time acting somewhere between silly or downright insane, yet is always perky and cheerful. However, she has the most real combat experience of all the princesses and is incredibly skilled in a ranged-fight.

Unfortunately for Liliana, she doesn't get along very well with Chris or her fellow princesses, and she finds herself developing a crush on Arata early on. This causes her a bit of trouble when she actually tries to fight in the Waltz. 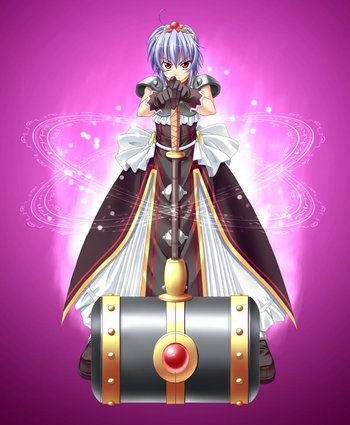 Princess of Palmeid
The Princess of Steel, she hails from Palmeid, a blacksmithing country and the only non-monarchy in Eldhiland. She doesn't really have much interest in marrying Chris—she's really just involved in the Waltz to prove the power of her Dress and for the sake of everyone who helped create it. Liesel employs ruthless tactics and prefers to win by any means possible rather than fighting with honor, and she deeply resents the other princesses for their natural strength of arms. Liesel's personality is intentionally left quite mysterious. 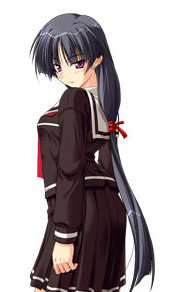 Princess of Wisley
Arata's older sister, who gives him advice throughout the story although she isn't directly involved in the events surrounding the Princess Waltz for most of the game. She's very skilled in kendo and has always practiced with Arata since they were children, meaning that they're very in sync with each other.

In the second half of the game, Shizuka takes up a more direct role, though not always prominently. If her route is taken, she is revealed to be the sixth and final Waltz contestant; the Beast Princess of Wisley.

The Princess of the Sword, she is the representative of Soldia in the current Waltz. Initially, little else is known about her. However, she seems to appear whenever Chris is in danger, yet the two are never seen side by side. As the story goes on, it is revealed that Chris takes on the guise of Iris, in order to fight and win the Waltz himself. After Arata and Chris synchronize due to Arata wearing one of Chris' rings, they fight together as Iris against the other princesses in order to fulfill Chris' dream and Arata's destiny.

In actuality, the real Princess Iris was the leader of the six legendary princesses who fought against Shichiou, the demon who threatened to destroy Eldhiland one thousand years ago. After Shichiou's defeat, she founded the Princess Waltz as a means of containing his evil, and ascended the throne to become the first Empress of Eldhiland, preserving the peace between the six kingdoms of the land that has endured to the modern day.

Shichiou is a legendary demon that threatened Eldhiland in its earliest days, who was sealed away by the power of six princesses, one from each country of the land. The sole survivor of six, Princess Iris of Soldia, founded the Princess Waltz to keep him contained. He partially breaks free at the end of the 1st Chapter.

His true identity is Eldhin, namesake of Eldhiland, saviour of the land and Princess Iris' former love interest.

A mysterious maid who was Chris' tutor. She's rather spacy and hard to read.

A masked priestess of Eldhiland's Imperial Court, who gives orders and advice to Chris on what to do to win the Waltz. She speaks very strangely and ruthlessly pursues her goal of seeing Chris achieve victory and his dreams of becoming a true prince.

Nanae is Arata's adoptive mother as well as his homeroom teacher. She's rather lazy but loves her children dearly.

Arata's childhood friend who lives down the street and attends the same class in school. Her father runs the kendo dojo where Arata and Shizuka train.