The staff in charge of PriPara, including the idols' managers who take the role of the show's Mascots and the (sort of) human staff. 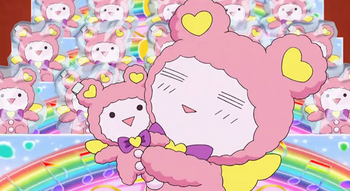 Kuma is the manager of SoLaMi Smile and is closest to Mirei, who found him back when she was first starting in PriPara. He has a shorttemper despite his cute appearance, and can be selfish at times but he genuinely means well and is kind when it counts. In Idol Time Pri Para, he has lost his job as a Manager and now works as a delivery person. 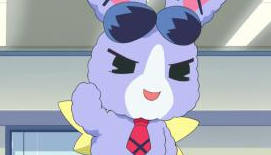 The original manager of Sophie until she left him to join Laala and Mirei. He would later return with a new unit ready for payback. He is calculative enough to be a good manager, and over the series grows to be less greedy. 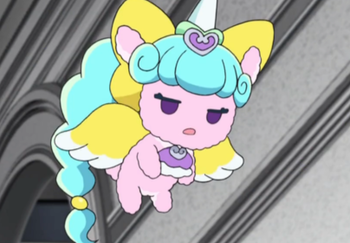 The childish manager of Falulu Bokerdoll. She appeared cold and antagonistic at first, and gave everyone else the brush-off. At the end of Season 1 she took off with Falulu but makes occasional appearances whenever she or her unit return to Japan's PriPara. 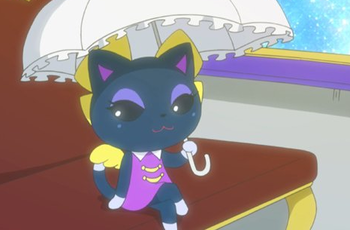 Neko is the charming Mascot Manager of Aromageddon (later Gaarumageddon). She runs a fortune telling shop in PriPara during her spare time and has no problem telling people what they want to hear or giving them a bad fortune if it means putting her team ahead. 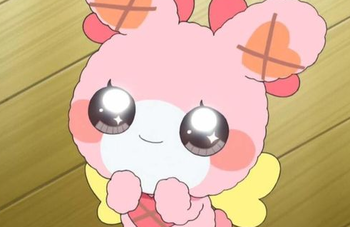 Usacha is the little sister of Usagi, who she idolized growing up and cares for deeply. After her feelings for him began to change she set out to surpass her brother by becoming a better Manager, which allowed her to connect to Non, Laala's sister. She managed Triangle for part of season 3, followed by NonSugar. 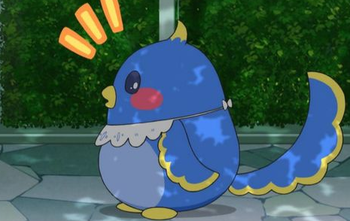 A negative and pessimistic mascot who came to think poorly of herself after being nicknamed the "blue bird of misfortune". She is highly shy and thinks the worst of others until she gets to know them, which allowed her to bond with Fuwari. Despite her introverted personality she can be quite proud if something goes well. 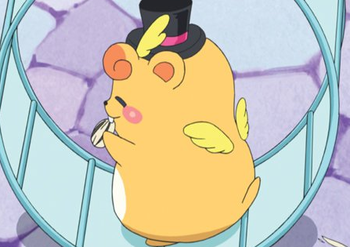 Ham is a well-known mascot and partner of Ajimi. Although he doesn't speak she is able to understand him from his responses and quirks. He loves to eat sunflower seeds and use a hamster wheel to move around, rather than fly. 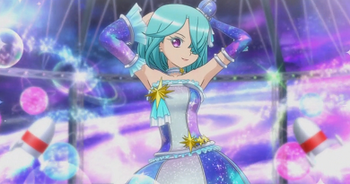 The older sister of Sophie and a part-time Idol who prefers to focus on fashion. She is the designer of various brands and coords, and is the one in charge of making Cyalume coords. Cool-headed, but generally friendly, Cosmo often worries over Sophie and had a hard time adjusting her to learning to be independent. Late in the series she performs in a unit with Ajimi and Chanko. She uses the Prism Stone brand. 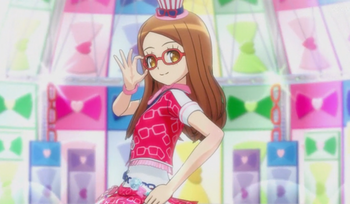 Several of them fill PriPara and run various features within it, as well as the Prism Stone shop. Most of them appear friendly and helpful, although she can be stern at times and is able to deduce the perfect brand for a new Idol at first glance. When performing on stage she uses the Prism Stone brand. 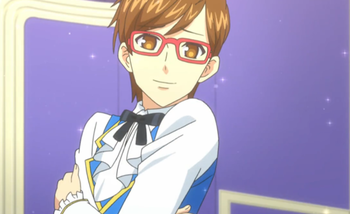 Brother of Meganee Akai, there appears to only be one of him within PriPara, although many exist from various parts of the world. Charming and collected, Meganii is the only other known male in PriPara and handles song writing for Idols who impress him. In Idol Time he also runs and manages BoyPara, the male counterpart to PriPara