The Trio in General 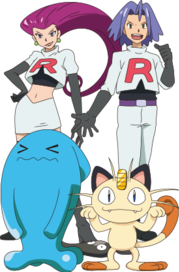 Did someone ask something? We're here to find out!
Noble answers are what we're all about!

The beauty so radiant, the flowers and moon hide in shame.
A single flower of evil in this fleeting world:
Jessie!

The nobly heroic man of our times!
The master of darkness fighting back against a tragic world!
It's James.

It's all for one and one for all!
A glittering dark star that always shines bright !
Dig it, while Meowth takes flight!

The main antagonists of the series, Jessie, James, and Meowth, are members of the villainous gang Team Rocket who are always on the tail of Ash and his friends. Deeming Ash's Pikachu to be extraordinarily powerful after it foiled one of their heists, they promptly decided it'd be the perfect Pokémon to steal and gift to their boss, Giovanni, and they've been following the two in hopeless pursuit ever since. Their singleminded pursuit of one particular individual Pokémon has been to their detriment, causing them to frequently be strapped for cash and struggling to support themselves through other various means, all the while still clinging to their futile goal. Their track record eventually got so poor that it led Giovanni to forget that they were members of the crime organization to begin with!

At the end of Diamond and Pearl, however, he took notice of them again, and gave them a special mission in the Unova region. As a result, the trio became far more competent, getting involved in bigger and more elaborate schemes masterminded by some high-ranking Team Rocket member. It didn't last, and they soon went back to their comical personalities of old. Old habits die hard, but you'd be an idiot to underestimate them.

To date, they are the most prominent characters in the anime franchise next to Ash and Pikachu, continuing to follow the pair even as other travelling companions go their separate ways. Amazingly, they even have persisted into standalone Pokémon films featuring Ash and Pikachu but otherwise exist in separate continuities from the TV series, proving their tenacity apparently spans alternate universes. 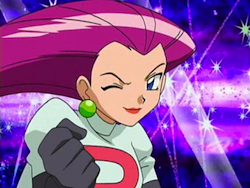 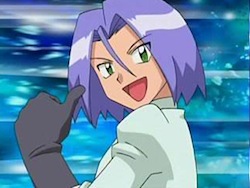 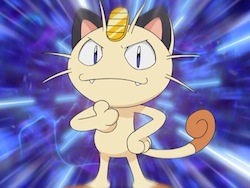 The third Team Rocket member. Team Rocket's Meowth, in a rarity for his species (and Pokémon in general), is fully capable of normal human speech. He is rather useless in battle due to spending most of his efforts on speaking and walking like a human. Meowth is oddly philosophical, which doubtlessly helps him tolerate the endless beatings his group receives. He longs for the favor of Giovanni, which has led to strange daydreams about the Boss Rocket in recent seasons.

Companion Pokemon Through the Years 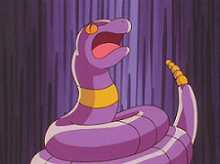 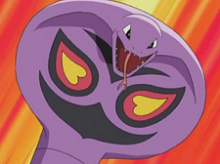 Received as a birthday gift,note chūgen in the original Ekans was Jessie's first Pokémon within the series. It lost quite often despite its best efforts, even after evolving into Arbok. It would eventually be released to protect a bunch of Ekans from poachers.

Voiced in Japanese by: Chinami Nishimura
Voiced in English by: Eric Stuart 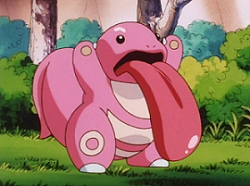 Jessie caught Lickitung after a combination of eating some food meant for Giovanni and paralyzing Arbok led to a Poké Ball to the head. After a promising debut against Misty in the Princess Festival in the same episode, it faded into obscurity and was eventually traded by accident for Wobbuffet. 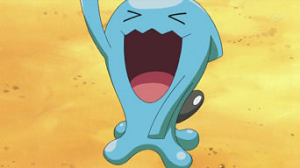 After being traded by accident from Lickitung, Wobbuffet has stayed on the side of Team Rocket ever since. He acts mostly as a cheerleader but whenever he is used in a battle, he is a force to be reckoned with. 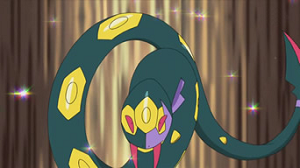 Seviper was beaten mercilessly by Jessie and captured after biting her hair. This would be the first in a long line of humiliations for the snake Pokémon, who would serve as Jessie's main fighting Pokémon through the AG and DP series. 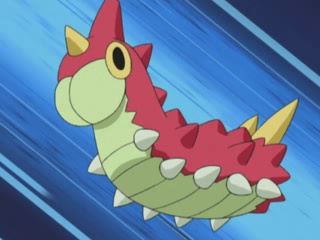 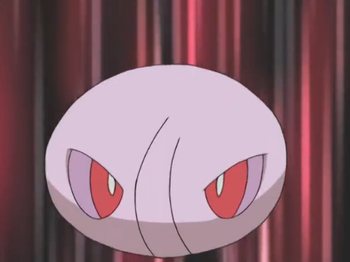 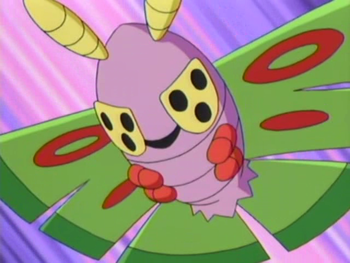 Wurmple was caught in the hopes of being raised to be a Beautifly to win Contests. However, like all of Team Rocket's aspirations, they were for naught, since she evolved into a Dustox...which Jessie loved anyway. Dustox would go on to be her main contest Pokémon until her eventual release in Sinnoh. 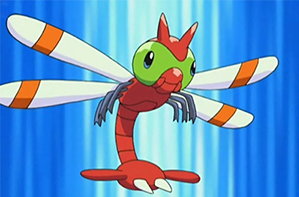 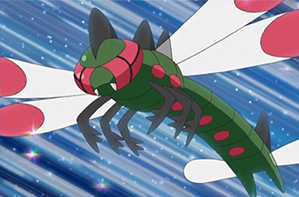 Yanma was one of Team Rocket's first successful thefts in forever! ...Too bad Giovanni thought she was useless and sent her back. Undaunted by this, Yanma would evolve very soon after into a Yanmega and join the ranks of Team Rocket until the end of the DP arc.

Voiced in Japanese by: Kiyotaka Furushima
Voiced in English by: Michele Knotz

Woobat was Jessie's first Unova Pokémon. Even though it fought with a more serious Team Rocket, it still lost plenty of times.

Voiced in Japanese by: Chiaki Takahashi
Voiced in English by: Kayzie Rogers 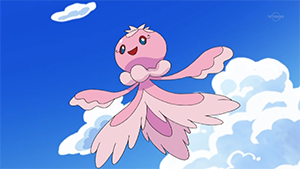 A female Frillish arrived on the scene when Team Rocket returned to Unova for their own motives. She would go on to fight for Team Rocket through the remaining BW arc. 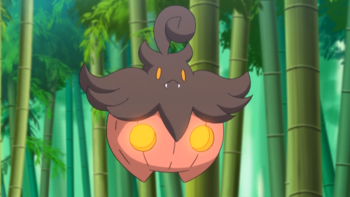 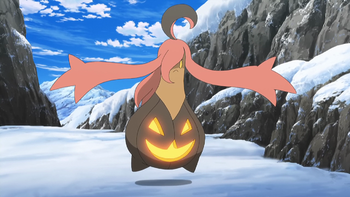 Pumpkaboo was another victim of Jessie's irritation after she tripped over it in a forest, and she shined its light everwhere. Regardless, she happily serves as Jessie's primary fighting Pokémon for XY, especially after evolving into a Gourgeist.

Voiced in Japanese by: Daisuke Namikawa
Voiced in English by: Billy Bob Thompson 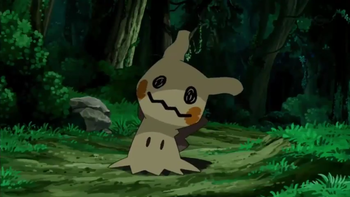 A Ghost/Fairy Pokémon wearing a ragged Pikachu costume. It develops an intense dislike of Ash's Pikachu, so Team Rocket targets it. Jessie, after losing her usual luck with throwing regular Poké Balls, uses James' Luxury Ball to catch it.

Received as a Christmas present,note  Year-End in the original Koffing was James' first Pokémon in the series. Much like its fellow teammate, Ekans, it was not a very good battler, even after evolving. It would eventually be released to protect a bunch of Koffing from poachers. 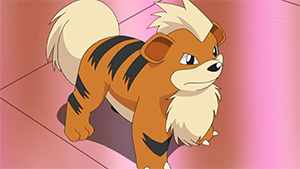 A Growlithe that James owned since his childhood. Unlike James' other Pokémon, Growlie lives with James' parents and doesn't take part in Team Rocket's crimes. It is very loyal to James who considers it as his precious friend which he wouldn't replace with another Pokémon. Their friendship is also the reason why James doesn't want to marry Jessiebelle; Jessiebelle despises Growlie, and would get rid of him if she ever did marry James. 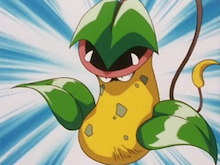 Victreebel was first seen in one of Butch and Cassidy's fake breeding center's cages. After it got out, it served James in battle fairly well despite its odd way of showing affection. It got traded to the Magikarp Salesman for a Weepinbell, who evolved into another Victreebell and was promptly kicked out over the exact same gestures of affection. 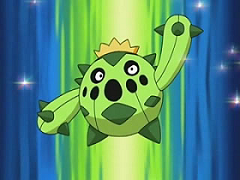 Cacnea first helped Team Rocket by driving off a flock of Beedrill with its Pin Missile. After James fed it some cookies and released Weezing, Cacnea walked up to James and offered to join. It would go on to be James' main battling Pokémon and hugger until it left to master Drain Punch under Gardenia's tutelage. 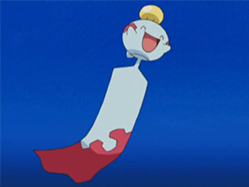 Chimecho volunteered to become a member of Team Rocket after coming over to James, getting him out of his funk over not having a Chimecho since childhood. It was very sheltered by James, only allowed to come out to cheer on and heal Team Rocket, but it didn't seem to mind. It retired to stay with old caretakers of a summer home after getting a fever. 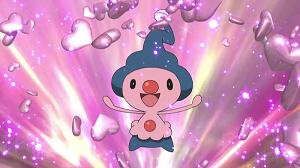 As Chimecho was released, Mime Jr. voluntarily captured itself in one of James' Poké Balls. It became James' replacement for Chimecho, but it was more of an active battler.

Voiced in Japanese by: Daisuke Sakaguchi
Voiced in English by: Billy Beach 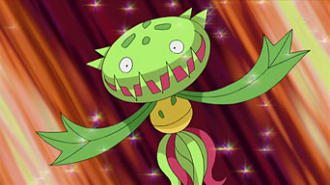 Carnivine was captured in the Great Marsh when James was a child and was left in his parents' vacation home until James revisited it in the beginning of the DP arc. It was James' main fighting Pokémon and was just as cuddly with him as its predecessors.

Voiced in Japanese by: Mika Kanai
Voiced in English by: Tom Wayland 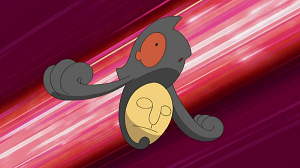 Yamask was caught after being fed by James. He was James' first Pokémon caught in Unova. 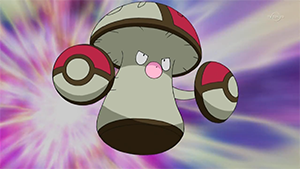 After Team Rocket returned to Unova, James used Amoonguss to fight the twerps. It would be James' main battling Pokémon for the remaining BW arc.

Voiced in Japanese by: Kenta Miyake
Voiced in English by: Michael Liscio Jr. 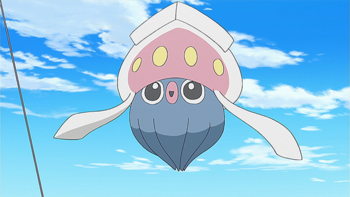 Inkay was also caught because of food used by James. He is James's only Pokémon so far in Kalos.

Voiced in Japanese by: Fumiko Takekuma
Voiced in English by: Melissa Hope 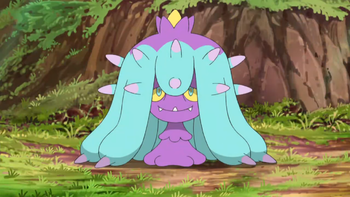 Mareanie is a Poison/Water-type starfish-like Pokémon that became fond of James in much the same way as his past Grass types. She left her herd to continue bothering James after realizing that he resembled a Mareanie after dousing him in her poison.