The Gym Leaders in Kalos, beating them grants the eight Badges necessary to enter the Kalos League.

"Whether it's the tears of frustration that follow a loss or the blossoming of joy that comes with victory... They're both great subjects for my camera! Fantastic! This'll be just fantastic! Now come at me! My lens is always focused on victory—I won't let anything ruin this shot!"

A photographer specializing in Bug-type Pokémon. 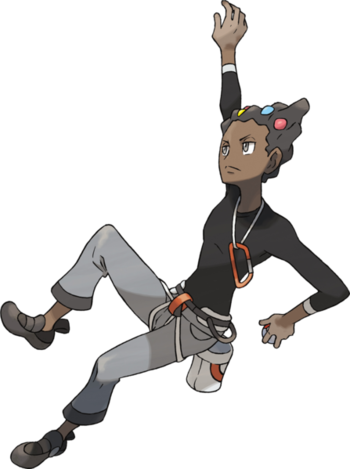 "I've been waiting in eager anticipation! What have I been waiting for? For a worthy challenger to appear! It's quite an achievement to have climbed all the way up here. Very impressive, actually! I have a feeling that our battle will turn out to be worth the wait! I hope you'll show me that your skill as a Trainer surpasses even mine."

A rock climber who also specializes in other sports, specializing in Rock-types. 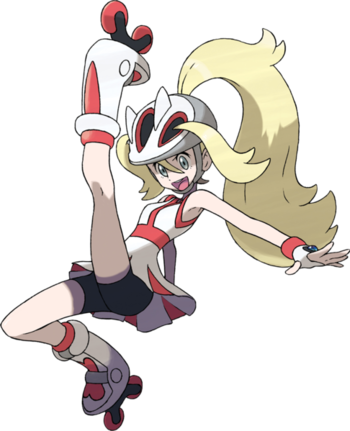 A roller-skater girl, specializing in Fighting-types. She's also the Mega Evolution successor, and the one who gives you the Mega Ring. 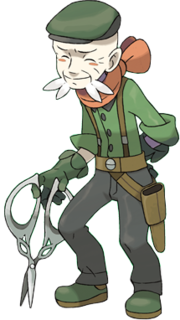 Coumarine City Gym Leader — The Old Growth is Still in Bloom!
Voiced by: Steve Kramer (Pokémon Masters - EN)
"So what'd yeh think, whippersnapper? Did yeh enjoy the garden playground I made with all these sturdy plants o' mine? Their strength is a sign o' my strength as a gardener and a Gym Leader! Yeh sure yer up to facing all that?"

An old gardener who specializes in Grass-types.

Lumiose City Gym Leader — The Inventor Lighting Up the World 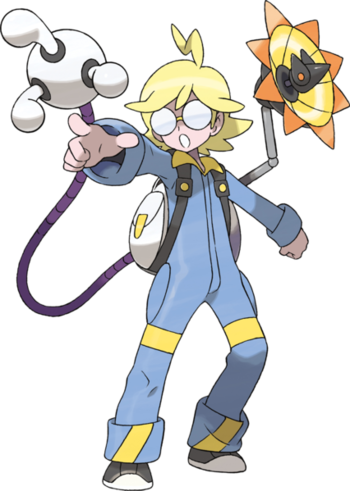 A Gadgeteer Genius young boy who specializes in Electric-types.

For the anime version of Clemont, see Pokémon XY. 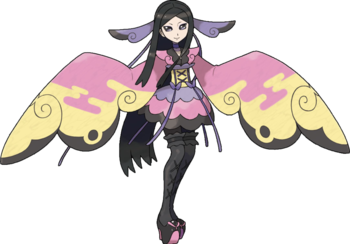 "Oh, if it isn't a young Trainer... So you've flown all the way through my Gym, fluttering down to me on a fortunate wind. ...I hope your visit will prove entertaining to you. The elusive Fairy types may appear frail as a breeze and delicate as a bloom, but they are strong."

A fashion designer originally hailing from Johto who specializes in Fairy-types. 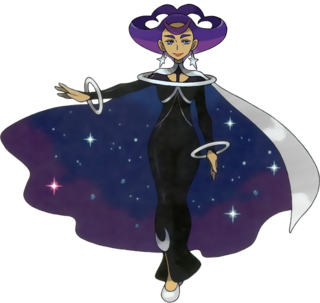 "A ritual to decide your fate and future. The battle begins!"

A mysterious woman who specializes in Psychic-types. 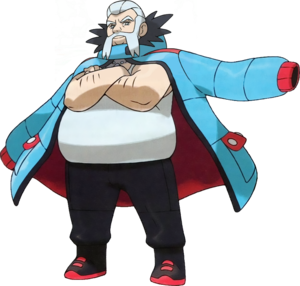 Snowbelle City Gym Leader — Tough as an Iceberg, Hot as a Furnace

"Y'know what? Ice is both extremely hard and terribly fragile at the same time. You know what that means? Depending on which Pokémon you choose and what moves they use, I could be your most challenging opponent yet or I could be a total pushover. But that's all right. That's how it should be! Anyway, enough of my rambling! Let's get this show on the road!"

An old man who specializes in Ice-type Pokémon.