Unofficial Pokémon which only appear through the use of glitches. 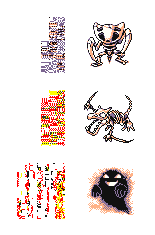 The most popular and well known "glitch" Pokémon, and a contender for one of the most (in)famous video game bugs known. Missingno. exists due to the way Pokémon handles a tutorial early in the game. When an Old Man in Viridian City shows the player how to catch Pokémon, the player's name data is removed and stored elsewhere, so the Old Man can be called "Old Man" in their place. This name data happens to be stored in the memory slot where wild Pokémon encounter rates are held. Normally this isn't a problem; the data is overwritten every time the player enters a new area, and their current area has no wild Pokémon to meet. However, flying to Cinnabar Island does not overwrite the data, thus when the player surfs up and down the coast of Cinnabar Island, their name data is called up as wild Pokémon data. This results in a multitude of glitch Pokémon: Pokémon from whatever normal encounter zone you were just in, Pokémon over level 100, and Missingno. Explanation What exactly makes up the Pokémon over level 100 is dependent on the player's name

, but Missingno. is spawned by the bit that indicates the end of the player's name and any blank spaces, so it will always appear..

'M is exclusive to Pokémon Red, Green, and Blue. When it's traded to Yellow, it becomes a 3TrainerPoké ‎₽.

From left to right: 'M and Q ◣

Having the index number FF, this variation of 'M and Q ◣ are the most special of glitch Pokémon. At first sight, 'M seems to be a mere hybrid (same color palette, starting moves, Pokédex number, and base stats) of Charizard, as well as having the same sprite (earning its Fan Nickname), while Q ◣ is a hybrid of Starmie, though it does not have the same sprite. However, Charizard 'M and Q ◣ are the closest things to a Reality Warper in the first generation, as their index number is the same as the game uses internally for the CANCEL button.

When they are in the party, any Pokémon placed below them will be treated as non-existent by NPCs, not allowing them (as well as Charizard 'M/Q ◣) to be healed at a Pokémon center, the player's home, or when losing a battle, and can only be healed by items.

During a battle, Charizard 'M has a chance to turn your Pokémon into other Charizard 'M. If battling a Q ◣, the ZZAZZ glitch will be activated, and will freeze the game if the player tries to open the party screen. Q ◣ itself appears as frozen and with an enormous amount of HP (noticeable through the broken HP bar).

When Charizard 'M or Q ◣ is deposited in a box in Bill's PC, it can be used to change the species of the Pokémon deposited after it, while keeping the moves they knew.

Charizard 'M is exclusive to Pokémon Green, Red, and Blue. If traded to Pokémon Yellow, it becomes a Q ◣, and vice-versa.

A popular glitch Pokémon, it's fairly harmless (at least as harmless as they come) and is a result from the fourth method of the Mew glitch. It's notable for its cry, which changes on cries of other Pokémon having played out and its cry potentially going on for minutes on end and crashing the game. Being a hybrid of Gengar, it can learn all of the same TM moves as it.

It's notable for being the heaviest of the Generation I Pokémon that can be obtained without using a cheating device, weighing in at 6,099 lbs, as well as one of the tallest, standing at over 80' 3"/24 meters tall (which is almost as tall as the Pokémon Tower in Lavender Town).

Weighing in at over a ton and an extremely 'lanky' 23 feet and 2 inches (7.1 metres) tall, this Glitch Pokemon has the bizarre Glitch Type of '99||9', a type it shares with MissingNo. in Pokemon Yellow. It is one of a number of Glitch Pokemon that 'transforms' if sent from Yellow to Red or Blue, where it becomes ▶ A instead. 4 4's evolution chain is particularly weird, in that it shares an evolution with another Glitch Pokemon called × 'rゥ. 4-, transforming into the Charmander Hybrid Monster PkMn pゥぁ ゥぇ at Level 240. Perhaps most disturbingly of all, 4 4's cry is that of Pikachu, but mixed with horrendous screeching noises. Alternatively, its Summary cry is that of Rhydon, while its cry when withdrawn or deposited to a PC is the theme of Cinnabar Island, only slowed down to a crawl.
Xu-xu; (X ゥ- xゥ,)
This Glitch Pokémon is purple, has an 827 base stat total (assuming its special stat would split into Special Attack and Special Defense if ported to later generations) with all of its stats above 110, and is completely safe to use. It learns no dangerous glitch moves, doesn't freeze the game, and is Godly powerful. It is only obtainable in Yellow version via the Mew glitch with a special stat of 196 and must be captured twice, because the first one you catch will turn into a Rhydon.

A corruption of Pokémon data that appears from Gen III game onwards, this egg-looking abomination may appear if cheating devices are used in reckless ways.