Gen VI families got so long it had to be broken into two pages. For the rest, go here.
open/close all folders
Dedenne 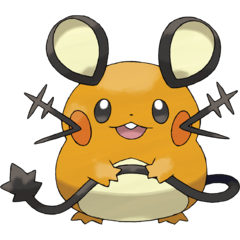 Every region seems to have their own variety of adorable electric rodent, and this is Kalos' version. It's an Electric/Fairy type hamster, field mouse, or gerbil-type rodent with an electrical cord-like tail. Despite its small size, it uses its antennae-like whiskers to communicate over long distances. 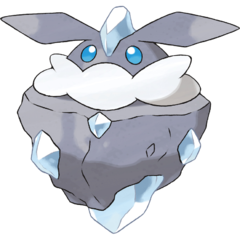 There are many things that Fairy-types can take inspiration from, ranging from cute creatures to pixies to mystical beings to The Fair Folk. But Carbink is more different than that. It takes on the appearance of a sprite nestled in gem-encrusted rock, hence its Rock/Fairy typing. Its defenses are its highest stats and it can hold off Dragon and Flying-type attacks alike, but it doesn't take hits from Steel-types very well.

Under very rare circumstances, a Carbink can suddenly mutate into Diancie, one of the Mythical Pokémon of this generation. What triggers this transformation is unknown. 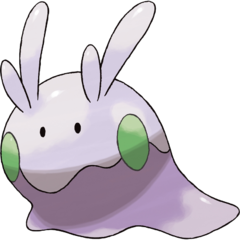 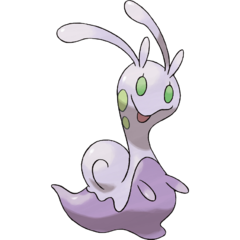 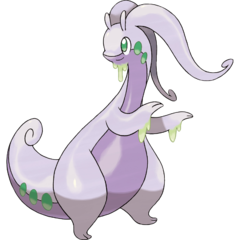 When most people think of dragons, they imagine huge bat-winged lizards with huge claws, jagged teeth, and clad in steel-hard scales. Yet, Goomy isn't like that at all. Instead, it is a tiny, squishy slug. Hard to believe, but if you give this creature enough time and care, it proves that great things can come from small packages. 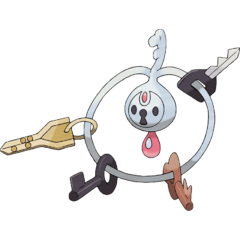 Whenever somebody loses their keys and blames it on a fairy, it's probably the work of this animated key-ring. Klefki is a Steel/Fairy Pokémon that collects keys and refuses to drop them. Ironically, people also use them to safe-keep important keys. 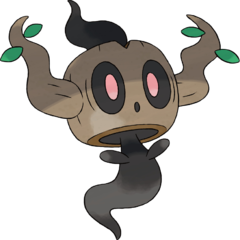 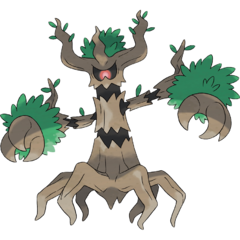 A pair of ghostly forest-dwelling Pokémon. Phantump is the spirit of a child who became lost in the forest, and looks rather sorrowful to back that up. Trevenant first made its appearance in a trailer for Pokémon X and Y before the 16th Pokémon movie, and it resembles an angry one-eyed tree with spindly legs. 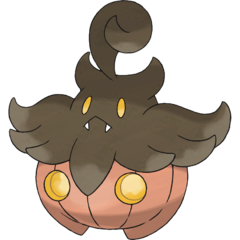 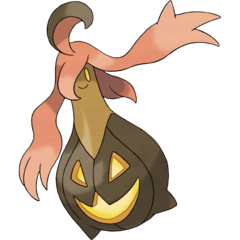 A ghost inhabiting a pumpkin. It evolves into a much larger pumpkin with a ghost inside. It comes in four different sizes, each of which have varied base stats. The two evolutions' personalities are different, but there's one thing they have in common: they love to go trick-or-treating. Just beware: you may not be the same afterwards... 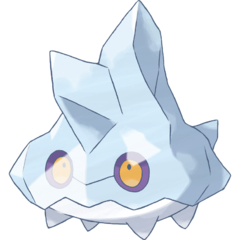 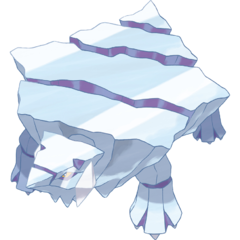 If the Mighty Glacier trope was visualized as an actual glacier, these Pokémon would be the result. It's the proverbial tip of the iceberg that evolves into the base of the iceberg turtle/aircraft carrier with legs. As would be expected, they're extremely slow but have the physical stats to back that up. 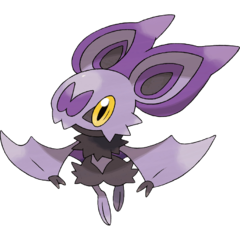 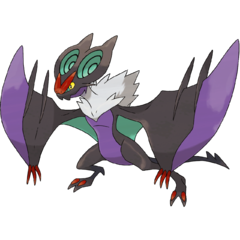 A Flying/Dragon wyvern fruit bat Pokémon. Its ears appear to look like stereo speakers, and it uses them to launch ultrasonic waves powerful enough to shatter boulders. 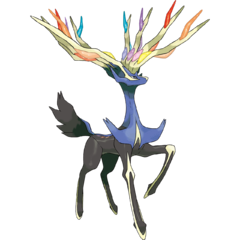 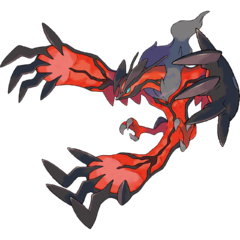 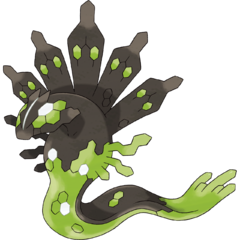 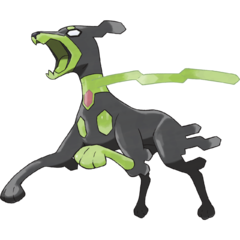 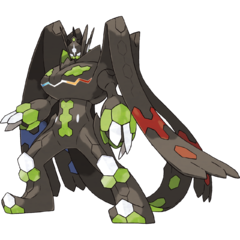 Zygarde Complete Forme
Zygarde 10% Forme and Zygarde Complete Forme debut in Sun and Moon
Kalos' main Legendary trio and the only group of Legendary Pokémon introduced in Generation VI. The first two are mascots of Pokémon X and Pokémon Y. The life-granting Xerneas resembles a large blue deer with elaborate antlers and acts as the mascot of Pokémon X, while the destructive Yveltal resembles a horned vulture with huge claws on its wings and tail and acts as the mascot of Pokémon Y. Three thousand years ago, one of the two was used to power AZ's ultimate weapon, which had the power to bring back life by taking many more. Xerneas and Yveltal may enter a dormant state once their energy has been spent, with Xerneas taking on the form of a tree while Yveltal resembles a cocoon. Alongside the starters, Xerneas and Yveltal were the first Generation VI Pokémon revealed to the public. Zygarde is the third Legendary Pokémon thar resembling a green and black serpent with hexagon patterns, said to bring order between Xerneas and Yveltal. Zygarde, much like Rayquaza, Giratina, and Kyurem, has multiple formes. Each forme is made up of a combination of Zygarde Cells and its "brain", Zygarde Cores. While it usually remains in its serpent-like 50% Forme, in emergencies, it can send out a single Core as its 10% Forme, which resembles a dog, and in grave situations, it can combine with other Cells and Cores to attain its Complete Forme, which is the most humanoid, but is also gigantic and otherworldly.

In a break with series traditions, Zygarde's formes did not debut in a third version or sequel set in the Kalos region, but rather as part of Pokémon Sun and Moon. This, combined with the semi-replacement of Aura Break (a Power Nullifier against Xerneas and Yveltal's Abilities) with Power Construct, seems to suggest that Zygarde has been interpreted as more than just a mediator between Xerneas and Yveltal. 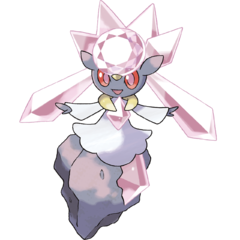 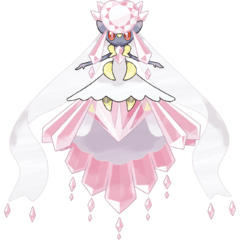 A Mythical Pokémon hailing from Kalos, Diancie is unique in that rather than being its own species, it is the result of a mutated Carbink. It is capable of creating diamonds by taking carbon from the air and compressing it with its hands, which it can weaponize with its unique Diamond Storm attack. It also has a Mega Evolution that gets the ability Magic Bounce and better offenses and speed at the cost of its defenses. It is the only Pokémon in Generation VI capable of Mega Evolving. 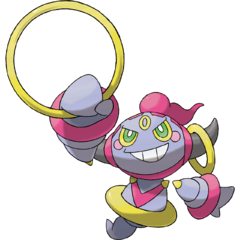 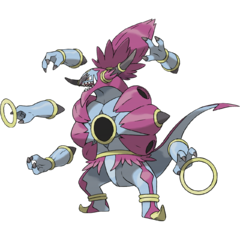 One of the Mythical Pokémon of Kalos, Hoopa is a reality-warping trickster of the Ghost/Psychic-type. Known for being a very impulsive and kleptomaniacal thief, it readily steals anything that catches its fancy, aided by its power to create hyperspace portals at will — this is reflected in its ability, Magician, that steals the held item of any Pokémon it hits. It starts out in Confined form; once it is Unbound, its type changes to Dark/Psychic and it becomes much more powerful and imposing. 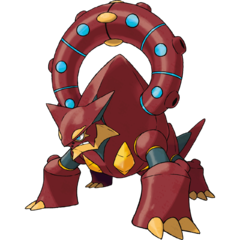 Another Mythical Pokémon hailing from Kalos, and the final Pokémon in its Pokédex. A strange lion-turtle-like creature with a furnace or water-heater aesthetic, Volcanion is notable for being the only Pokémon that's a Fire/Water-type. With its unique type combination, it has helped the Water-type become paired with every other type, including itself and the new Fairy-type, thanks to a retcon. This unique combination also gives it the ability to generate steam, which it can use as an attack powerful enough to destroy mountains.