The character sheet for the second generation's Pokémon got so big that it had to be split. For the rest, go here and here 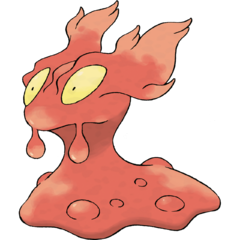 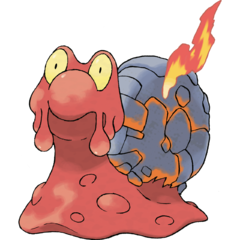 Slugma and Magcargo are gastropods that are found nowhere near any sources of water. This is due to them being made of boiling lava. Slugma must constantly be on the move because if it stops, then its body would cool down and harden. Magcargo gains a brittle shell of hardened lava that somehow grants it a high defense stat. Not that it makes too much of a difference, since it's exceedingly weak to Ground or Water attacks. 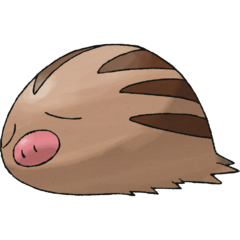 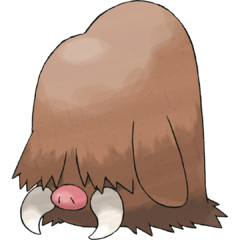 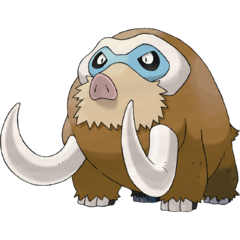 Swinub is an Ice/Ground type that's based on a boar piglet. As it matures, it loses the stripes but gains tusks that it uses to ram its opponents and gore them. It was fairly unremarkable in Gens II and III, but in Diamond and Pearl, it gained an evolution in the form of Mamoswine. Its typing is a bit of a double-edged sword, since it can hit a lot of Pokémon with super-effective attacks while being weak to a number of them as well. Mighty Glacier is an extremely appropriate trope for this Pokémon. 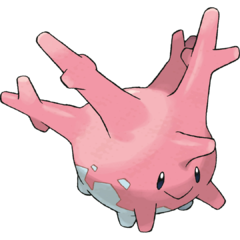 Corsola
Cursola debuts in Sword and Shield, being exclusive to Shield.

A Pokémon based on stag coral. It's known to have great regenerative powers: unlike real coral, which takes decades to grow, Corsola's broken horns can regrow in a single night. However, they need clean water in order to do this; otherwise it gets sickly and dies. It appears to have a plucky nature (one of its abilities is Hustle), but it's mostly defensive according to its stats. Just beware of Grass attacks.

In the Galar region, the native Corsola were wiped out by climate change. However the species still lives on as Ghost types, and they are capable of evolving into Cursola, a Pokémon capable of paralyzing anything that touches it. 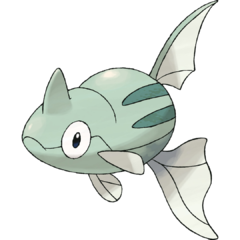 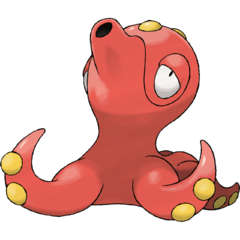 Remoraid and Octillery are water types that are well-known for being related by evolution despite being very dissimilar to one another. However, they're also well-known for shooting things. Remoraid is a remora that vaguely looks like a gun while Octillery is an octopus that vaguely looks like an artillery cannon. Remoraid is well-known for hanging around groups of Mantine, who allow them to stay by them and eat their scraps. It's more symbiotic than it sounds, because in return, Remoraid's presence allows the other's baby form, Mantyke, to evolve. 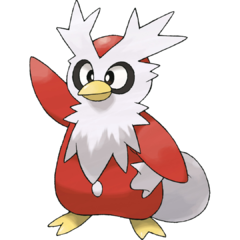 An Ice/Flying-type that's a cross between a penguin and the popular Western depiction of Santa Claus as a jolly old fat man in a red and white suit who delivers presents to good boys and girls and coal to bad boys and girls. It's talented at delivering presents in its tail, which looks like the jolly old elf's bag. What it isn't talented in is battling. The only attack that it learns by leveling is Present, a move exclusive to it that does random amounts of damage or even heals the target. The only redeeming quality it might have is that it can have Hustle (an ability that boosts damage but lowers accuracy) and can be taught Aerial Ace (a move that never misses and gets a same type attack bonus), but that's only one pro it has against many cons. It's only found in Silver and its remake (Gold players get Gligar instead). 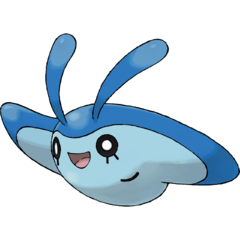 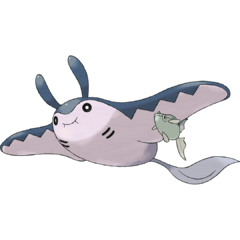 Mantine is a Pokémon based on a manta ray that uses its wing-like fins to leap out of the ocean. Its Special Defense stat is quite high, but its typing leaves it open to Electric-type moves, which undermines its ability as a special wall. It's also the heaviest Johto Pokémon and received a baby in Mantyke. It has a pattern of a smiling face on its back. It's exclusive to the Gold and HeartGold versions. In Pokémon Ultra Sun and Ultra Moon, Mantine appears as a ride Pokémon that allows you to surf between the islands of Alola. 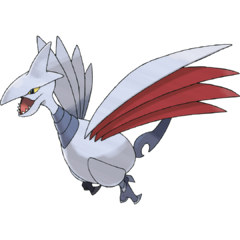 A steel crane (not the machine used in construction, but the bird). After nesting in briars, its skin gets scratched so much that it eventually hardens in metal armor that encases its body. The combination of its typing, Steel/Flying, which leaves it with only two special-based weaknesses, and its very high defense stat means that makes for an excellent wall that can shrug off most physical attacks like it was nothing. It's the version counterpart to Mantine, found in Silver and SoulSilver. 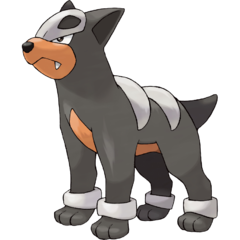 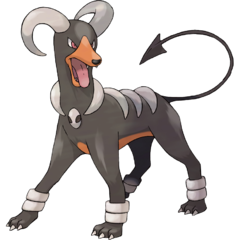 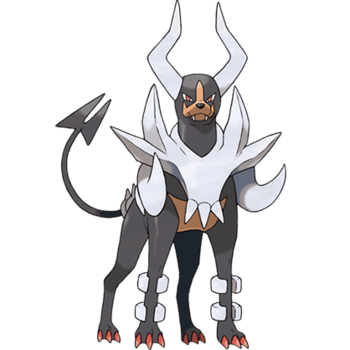 These devilish dog Pokémon are, appropriately enough, Dark/Fire types with great special attack and decent speed, attack, and special defense. However, by the time they're available to catch, you may have a number of useful Fire and Dark types at your disposal already. But don't let that stop you from using it. This Pokémon is partally based on the Doberman. In X and Y, it gained a Mega Evolution. Both of its defenses, special attack, and speed are increased with the Mega Evolution. Its nails also turn red from the increased firepower it carries. 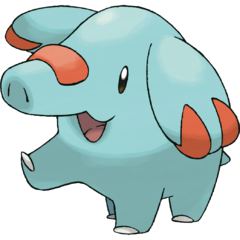 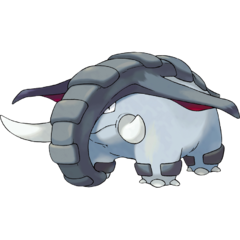 An adorable blue baby elephant that evolves into a not-so-adorable adult elephant mixed with a tire. Donphan's special talent is rolling around at high speeds, so it's not surprising that its trunk and back are covered with thick skin that resembles a car tire. Its attack and defense are very high, but its special stats are very bad. It's the version counterpart to Teddiursa and Ursaring (and switched games with them in certain international releases). 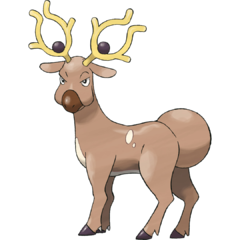 Stantler is a Pokémon based on a stag or reindeer. Its most famous features are its antlers that vaguely resemble eyes, said to each contain a miniature portal to another dimension. Many of the moves it can learn involve the antlers, ranging from threatening its opponents, confusing them, putting them to sleep, using Psychic attacks, to merely charging with them. Whether this makes it useful remains to be seen, though. 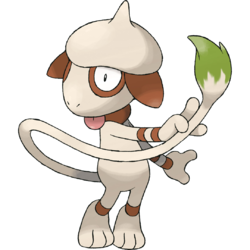 Here is a strange dog Pokémon. It has a seemingly boring appearance and can only learn a single move naturally. That said, it uses that one move to learn almost every move in the gamenote everything except Struggle and Chatter, and, while it can be taught Hoopa Unbound's Hyperspace Fury and Darkrai's Dark Void, it can't use them. The one thing holding Smeargle back is its very low stats, most likely to balance out its tremendous movepool. 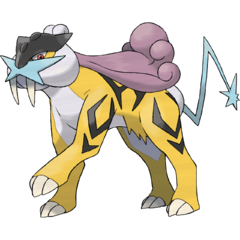 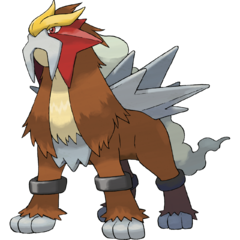 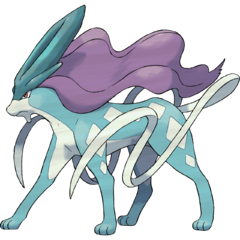 A trio of Legendary Pokémon based on mythical beasts with characteristics of felines and canines. Once nameless Pokémon that lost their lives in the fire that destroyed the Brass Tower, they were resurrected into their current forms by Ho-Oh. Their elements correspond to the circumstances of the incident; Raikou is a saber-toothed tiger bulldog raiju, representing the lightning that struck the tower, Entei is a either a Chinese guardian lion or a chow, embodiment of the fire that brought the tower down, and Suicune is a cheetah- or wolf-like qilin which corresponds to the rain that quenched the fire. They are the first of many, many Pokémon that will flee on sight, which is really annoying. Special measures must be taken to ensure their capture. Suicune is the mascot of Pokémon Crystal. 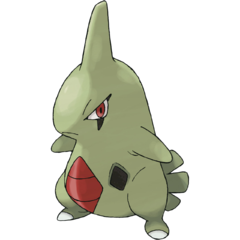 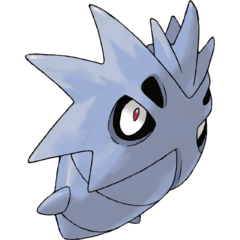 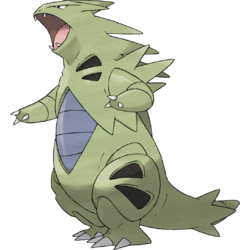 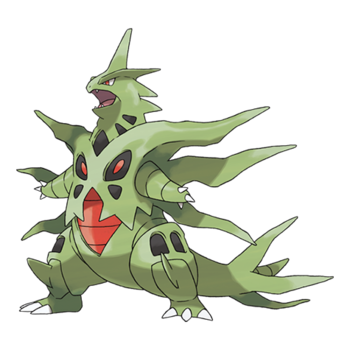 A small green reptile-thing with a bird-like tail, which then builds a cocoon around itself and later emerges as an angry armored Godzilla-like dinosaurian Kaiju ready to rampage. Its very high attack power, natural bulk, and its ability to summon sandstorms makes it quite useful in battles. Similar to the Dratini line in that it is hard to find and capture, but when fully evolved is one of the most powerful non-Legendary Pokémon in the game. It gained a Mega Evolution in X and Y. With increased attack, defenses, and speed, Mega Tyranitar is fierce. 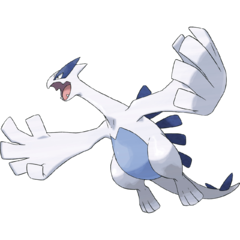 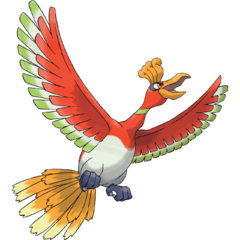 Generation II's mascots, and the first Legendary Pokémon to grace a game's box art, based on the mythical Japanese rivalry between the dragon and the phoenix. Lugia — a Psychic/Flying-type — is a white draconic bird monster with blue features and handlike wings. Ho-Oh — a Fire/Flying-type — is a phoenix whose feathers are the seven colors of the rainbow. Their power is noted to be godlike, even above other Pokémon: Lugia is able to spark a devastating and long-lasting storm with but a flap of its wings, and Ho-Oh can raise the dead (and pay interest). 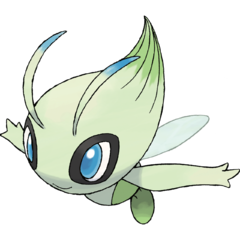 The strange and mystical Celebi is a Pokémon that boasts many abilities. Its main power is its ability to travel through time, though it also has the ability to revive plants. Due to this, forests that Celebi inhabit are said to thrive. Like Mew, this Pokémon is a Mythical Pokémon — a secret character not obtained through normal play, and only through special distributions. At least, until the Virtual Console release of Pokémon Crystal added the ability to catch one without events, wherever, whenever.