Characters from the manga Pokémon: Diamond and Pearl Adventure!. 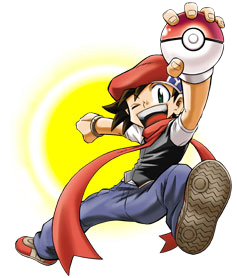