An organization dedicated to protecting hurt Pokémon, especially those who have been abused by Team Skull, on their own private island. However, there's more to them than it seems, which turns out to be them secretly having been in league with Team Skull the whole time, as their financial backer.

WARNING: Major spoilers for Pokémon Sun and Moon and Pokémon Ultra Sun and Ultra Moon follow. Read at your own risk.

open/close all folders
Tropes that apply to the whole group 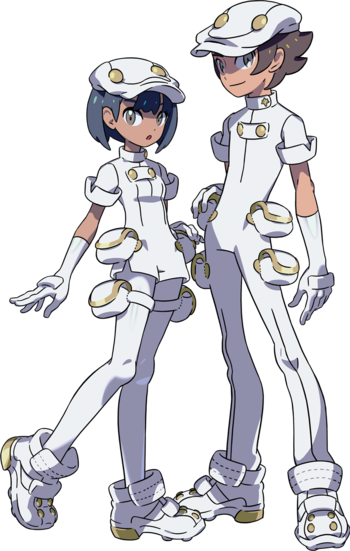 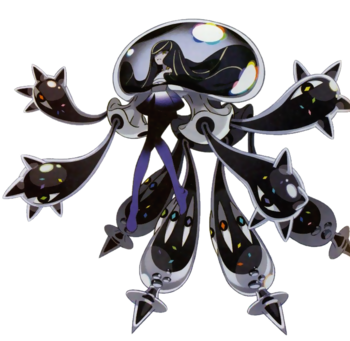 to see her fused form with Nihilego
Voiced by: Sayaka Ohara (Pokémon Masters - JP)
"I still need that Pokémon. I need to get it back. [...] It looked like it was suffering... Like it pained it to be in this strange place... I can't bear to see that happen! I will save it. And I will love it!" - From Pokémon Sun and Moon
"I will force Cosmog to use it's power and it may very well die. But if it will save the world for all my beloved Pokémon, then that is what I will do. Lillie. I will be using the Cosmog you stole for a great purpose. You have kept it safe until now, and for that... I thank you." - From Pokémon Ultra Sun and Ultra Moon

The lovely Lusamine functions as the Aether Foundation’s president, though as it turns out, she's not as lovely as she seems.

The assistant branch chief of Aether Paradise has a caring personality, so she’s loved by all the Aether Foundation employees.
Faba (Sauboh)

The Aether Foundation's branch chief. He has a very arrogant personality, and believes himself to be far more important than he actually is.