Back to the main page

The Leader of Team Rocket and the ex-Viridian City Gym Leader. An evil man who uses both Pokémon and people to accomplish his goals. Though he specializes in Ground-types, he also has powerful Pokémon that are other types as well. He's Silver's father.

A Gym Leader who used the S.S. Anne to transport stolen Pokémon. Specializes in Electric-types. After his Heel–Face Turn he uses S.S. Anne for legal ventures.

Another Gym Leader who joined Team Rocket, he specializes in Poison-types. Once missing along with the rest of the Johto Elite Four, he is now officially recognized as such.

The Leader of the Saffron City Gym who specializes in Psychic Pokémon and is a powerful Psychic in her own right.

Known as the Team Rocket Elite Trio, these three worked directly under the evil Gym Leaders.

A female admin who makes her first appearance in FireRed and LeafGreen as the leader of the beast trio and second to Giovanni. Seems loyal to Giovanni throughout the arc, and helps him find Silver... and then things get weird.

The beast Trio's mechanical and computer expert. He faces Red in battle in FRLG. The designer of the trainer tower's machines and "R". First appearing in FRLG and later appears in HGSS.

The beast Trio's "muscle". The one who kidnapped Professor Oak and fights Blue in battle.

The leader of the Four Generals of Team Rocket. He seeks Arceus so that he can convince Giovanni to return and lead Team Rocket again.

One of the Four Generals of Team Rocket.

The Master of Disguise. He's actually extremely good at it, unlike the games.

One of the Four Generals of Team Rocket.
Advertisement:
Kanto Elite Four 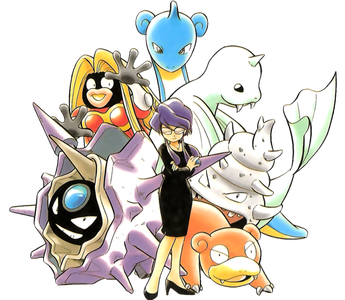 The first of the Elite Four Yellow faces, and the one who imprisoned Red in ice. She joins forces with the Kanto Dex Holders years later when Team Rocket threatens her home, the Sevii Islands. 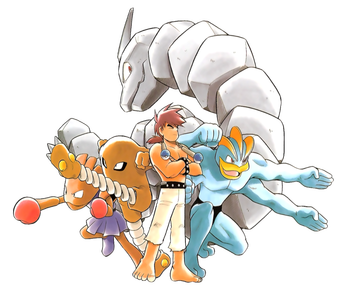 The Elite Four member who challenged Red. An otherwise honorable trainer, he is the only Elite Four who actually needs to be brainwashed in order to go along with their tactics. He is now officially a member of the League recognized Elite Four. 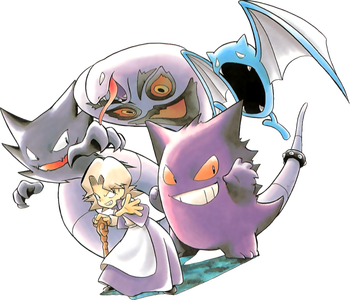 The oldest member of the Elite Four, she was once a friend of Prof. Oak until their differences in Pokémon research caused a break-up. She specializes in ghost-types, though she has poison-types on her main team as well. 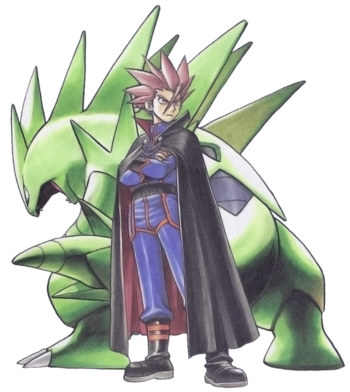 Lance in HGSS arc
The Leader and most powerful of the Elite Four, Lance specializes in dragon Pokémon. Like Yellow, he is one of the special few born in Viridian Forest, meaning he also can heal and read the minds of Pokémon. He can also instantly control any dragon-like Pokémon he comes across.
Neo-Team Rocket

The Masked Man (AKA the Mask of Ice) 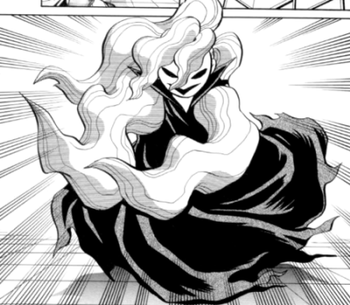 The Big Bad of the GSC chapter, he gathered the remnants of Team Rocket for his own plans. His motive is to gain the power to control time.

One of the Masked Kids who are directly under the Masked Man, Will is a psychic-type specialist who enjoys doing things for the thrills alone (but not the danger). After the Masked Man is defeated, he joins Koga and Bruno since he doesn't have anything else to do.

Another one of the Masked Kids, Karen specializes in the Dark-type. Though a little sadistic and twisted, she goes off with Koga and Bruno in good graces after the final battle.
Team Magma and Team Aqua 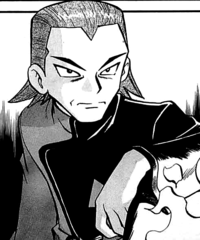 The Leader of Team Magma, he hoped to use Groudon for his plans. 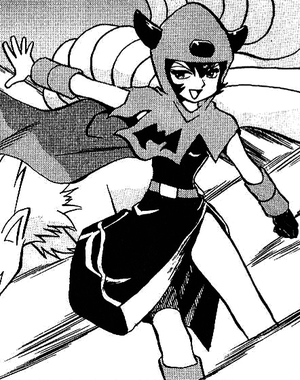 (Marge in the Chuang Yi version)

One of the three Three Fires, Courtney prefers to use straight forward ''brutal'' force. Develops an... interesting relationship with Ruby over time.

(Mitch in the Chuang Yi version)

Another of the Three Fires, this burly man specializes in putting people to sleep with his Torkoal's smoke.

(Mack in the Chuang Yi version)

Third member of the Three Fires. Only appears in this manga. 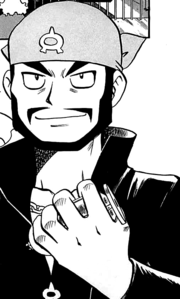 The Leader of Team Aqua, he hoped to use Kyogre for his plans.

(Angie in the Chuang Yi version)

One of Team Aqua's Sub-leaders of Sea Scheme.

(Ark in the Chuang Yi version)

One of Team Aqua's Sub-leaders of Sea Scheme.

One of Team Aqua's Sub-leaders of Sea Scheme. Only appears in this manga.
Guile Hideout 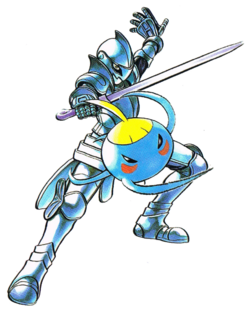 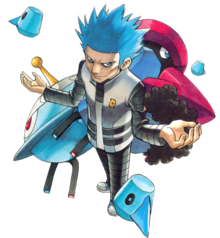 The Leader of Team Galactic. He wishes to control Time and Space. The Sinnoh Trio first met him at Mt. Coronet, where he attacked them with Probopass and Magnezone.

One of the three commanders of Team Galactic. She first encountered the DPP trio at Valley Windworks.

One of the three commanders of Team Galactic.

One of the three commanders of Team Galactic. Wears a warmth supporter on her left leg.

This refers to the unnamed grunt who has had more encounters with the DPPt trio than the other grunts, whom Cyrus seems to be give as much responsibilities to as the four commanders. He shows great interest in the Pokédexes.

The chief scientist of Team Galactic. Appears briefly in the Diamond/Pearl arc and goes on to become the main antagonist of the Platinum arc.
Advertisement:
Team Plasma

The king of Team Plasma. He has the ability to hear Pokemon's voices and wishes to create a world where Pokemon are liberated from humans. 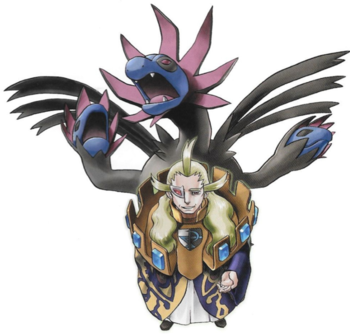 One of Team Plasma's Seven Sages. He is the true mastermind behind Team Plasma, planning to make everyone but Team Plasma give up their Pokemon so he can take control of Unova.

A trio of Team Plasma agents who work under Ghetsis.

One of the Seven Sages who is given more focus in B2W2 arc. 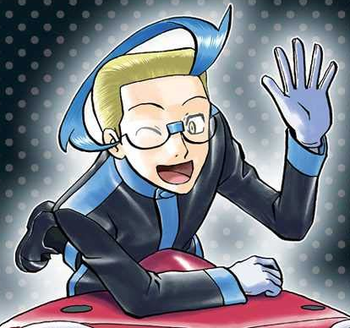 A scientist working for Team Plasma who is made into their leader in the Black 2 & White 2 chapter. He is obsessed with completing his Colress Machine and finding out how to draw out the true potential of Pokemon.
Team Flare

The leader of Team Flare. He intends to use the Ultimate Weapon to cleanse Kalos of all those he deems unworthy to create a better world.

A member of the Unova Elite Four and a high ranking member of Team Flare. Being a newscaster, she serves as Team Flare's way to control the media.

One of the five scientists in Team Flare, and the only male member.
Team Skull

The leader of Team Skull.

The only admin of Team Skull.
The Aether Foundation

Lillie and Gladion's mother and Mohn's wife, and the leader of the Aether Foundation.

The Branch Chief of the Aether Foundation who possesses great ambitions of his own.
Other 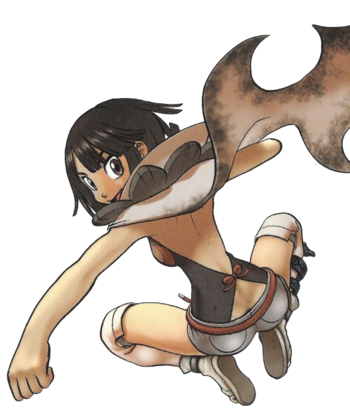 A member of the Draconid Tribe seeking to stop the disaster of the meteorite coming towards the Planet, she attacks Ruby, Sapphire, and Devon in order to steal the Mega Stones needed.

A pair of celeberties who one year before, stole the Rusted Sword and Shield from the Slumbering Weald and kidnapped Casey's Pokémon.
Advertisement: