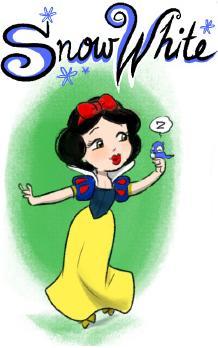 There's no use in grumbling when raindrops come tumbling...
Remember, you're the one who can fill the world with sunshine.
Have you met my Amazons? they're SUCH fun!

She's the first of the Disney Princesses, and the Fairest of Them All. She's quite the old-fashioned goody two-shoes, but at the same time, she's an endless fountain of sweetness and light who aims to brighten everyone's day in her own unassuming manner. 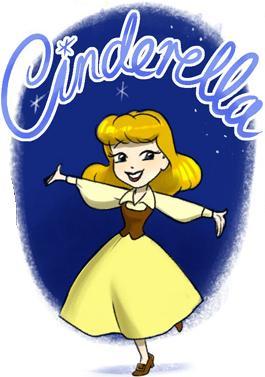 Have faith in your dreams and someday your rainbow will come smiling through...
No matter how your heart is grieving, if you keep on believing, the dream that you wish will come true!
Pish-posh, I thought you LIKED a challenge!

Once Upon a Time, Cindy was the mistreated maid of her Wicked Stepmother. One Fairy Godmother, Prince Charming, and loose Glass Slipper later, she's living Happily Ever After. Even so, all that maid-work has left her a major Neat Freak, and so she's not too dainty to resume her cleaning duties; someone has to keep the place tidy, after all. 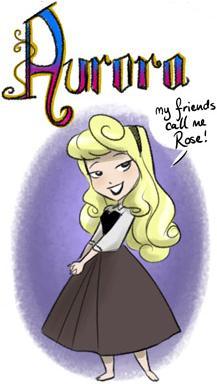 To keep her safe from the cruel Maleficent, Aurora was raised in a garden under the alias "Briar Rose" by a trio of well-meaning yet under-qualified fairies. As such, she's a passionate gardener... when she isn't passed out cold. It seems that although True Love's Kiss has broken her curse of Deep Sleep, she still has occasional spells of narcolepsy. 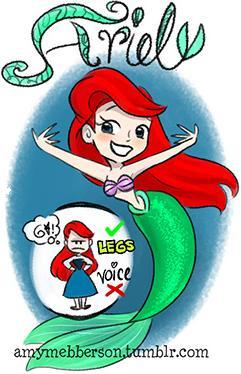 I've got gadgets and gizmos a-plenty, I've got whooz-its and whats-its galore...
You want thingamabobs? I’ve got twenty! But who cares? No big deal... I want more!
Well I can't swim laps in the BATHTUB, you guppies!

The proactive and petulant youngest princess of Atlantica, Ariel harbored a fascination with the surface world that led her to strike a Deal with the Devil, finally gaining human legs at the cost for her voice. Whether or not she appears in human or mermaid form, Ariel's an excitable and curious girl who's always looking to add a new trinket to her collection. 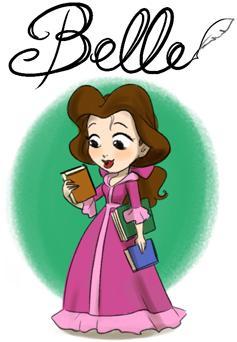 Oh, isn't this amazing? It's my favorite part because, you'll see...
Here's where she meets Prince Charming, but she won't discover that it's him 'till chapter three!
Ooooh, an original EILONWY! I LOVED

As a Spirited Young Lady from a backwards village, those who truly know Belle can see her finest trait is her mind, fueled by an intense love of reading. Unflappable enough to tame a troubled, unruly Beast, Belle's one of a few who can keep a level head in the Royal Court, though that's not to say she's without her own eccentricities. 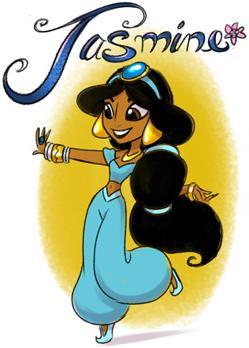 A whole new world, 100,000 things to see...
I'm like a shooting star, I've come so far, I can't go back to where I used to be!
Well excuse ME for trying to being a little SOPHISTICATION around here!...

The princess of the exotic kingdom of Agrabah, Jasmine possesses the strength of will and kindness of heart to choose life with a generous Street Urchin rather than a hoity-toity Arranged Marriage. Still, she's not above enjoying the finer things, which in her case include a living carpet and a large tiger. 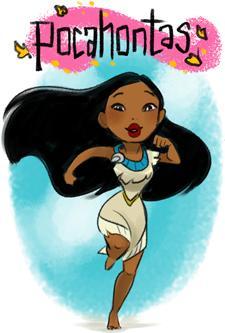 You think you own whatever land you land on, the Earth is just a dead thing you can claim...
but I know every rock and tree and creature has a life, has a spirit, has a name!
WINGAPO, SISTERS! Dawn smiles upon the gifts of Ahone and we are blessed!

She's The Chief's Daughter and Indian Maiden of the Powhatan tribe with the Blithe Spirit that brought peace between her people and the Englishmen. Able to magically commune with wildlife, spirits, and those of foreign tongue, Poca's known for her love of nature and (surprisingly dry-witted) playful soul. 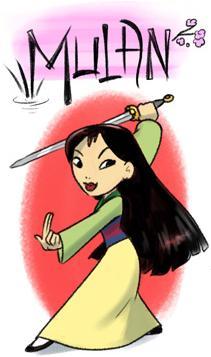 Ancestors, hear my plea:
Help me not to make a fool of me...
and to not uproot my family tree, keep my father standing tall!
If you can do this AND carry books, Belle, let's see it!

The noble yet awkward Fa Mulan wanted nothing more than to do right by her family, wound up disguising as a man to serve in the war against the Huns, and became the savior of China. Nonetheless, she remains a loyal Humble Heroine who enjoys moments of tranquility in between her warrior pursuits. 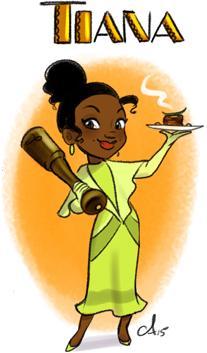 I remember Daddy told me: "Fairy tales can come true"...
You gotta make 'em happen, it all depends on you!
Girl likes to have a certain spring in her step, y'know!

While she's officially the princess of some place called Maldonia, Tia prefers to be known for her success as a New Orleans restaurateur, having honed her talent for cooking since she was little. One of the more sensible, down-to-earth princesses, she strongly believes in the value of hard, honest work with no cheats or shortcuts. 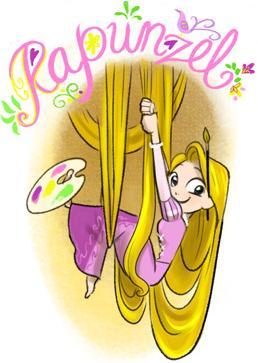 And then I'll read a book, or maybe two or three, I'll add a few new paintings to my gallery...
I'll play guitar and knit and cook and basically just wonder when will my life begin?
I can recite Pie to 4,256 fillings!

The missing princess of Corona has spent almost all her life kept away from The Outside World, but now that she's finally free, she's eager to go on adventures and slate her long-growing curiosity. With her long magical hair, childlike sense of wondrous verve, and killer frying pan arm, Rapunzel causes the most hi-jinx among the princesses. 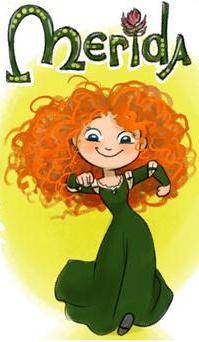 When cold wind is a' calling, and the sky is clear and bright...
Misty mountains sing and beckon, lead me out into the light!
I got yer wee "credentials" right here...

The proud princess of the Clan DunBroch, Merida's as rebellious as a princess can be, being a forceful, impetuous tomboy with a passion for archery and other unladylike interests. She may have matured a bit from her unruly and stubborn beginnings, but she'll never stop being a tough-as-nails adventurer who stands out the most among the Royal Court. 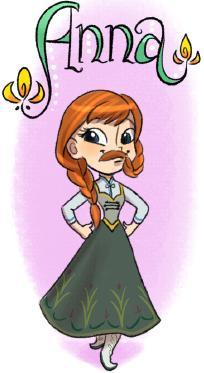 I don't if I'm elated or gassy, but I'm somewhere in that zone...
'Cause for the first time in forever... I won't be alone!
Baby steps, Elsaaa...

The younger and bubblier of Arendelle's royal sisters, Anna's awkward, impulsive, and a hopeless romantic, but she more than makes up for that with her spirited determination and loving heart. After all, it's those qualities that got her sister Elsa out of her icy shell after so many years, and the two are an inseparable pair. 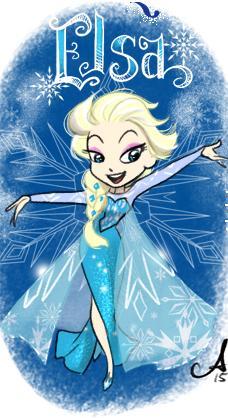 My power flurries through the air into the ground!
My soul is spiraling in frozen fractals all around,
and one thought crystallizes like an icy blast:
I'm never going back, the past is in the past!
First impressions, Annaaaa...

While she might be the wickedly talented Snow Queen of Arendelle nowadays, Elsa was initially raised to fear and reject her magical command of ice, and struggled with Pent up Power Incontinence. That all changed thanks to a certain sister showing her The Power of Love. As the elder sister, she's more reserved and regal... typically. 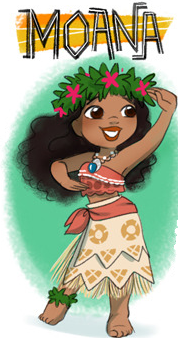 And the call isn't out there at all, it's inside me, it's like the tide, always falling and rising!
I will carry you here in my heart, you remind me that come what may, I know the way... I am Moana!
Oooh, I like a challenge...

As The Chief's Daughter of a Polynesian tribe Born Under the Sail, Moana loves the ocean more than anyone else... probably because she's best friends with it ever since it made her The Chosen One way back when she was a tiny tot. Nowadays, she often has (a small portion of) the Ocean with her and is always up for a challenge. 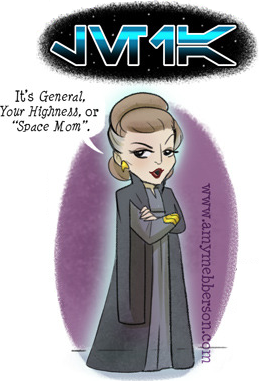 "Somebody has to save our skins!"
Works for me, just keep some Coke on the fridge!

A Long Time Ago, in a Galaxy Far Far Away..., Leia Organa was the princess of Alderaan, a key fighter in the Rebel Alliance, and in her winter years, the general who formed the Resistance. She made cameos every now and then whenever there was Star Wars hyping to be done, and took a liking to the princesses. Upon her untimely passing, she became a Force Ghost and started hanging out with them and dispensing wisdom more often, enough to be considered an unofficial member of the Royal Court.

My heart's in flight and wow, it's a blast!
Feels like my dreams are real at last!
Ya got any 32-bit burgers?

A little infamous "glitch" with a love of sweet high-octane, Vanellope was originally the princess of the Sugar Rush racing game before the usurpation of the wicked King Candy/Turbo led her to convert the title into a presidency. After a trip through cyberspace, she hit it off with the princesses and more or less joined the Royal Court after the release of Ralph Breaks the Internet.