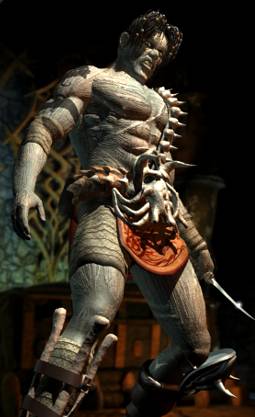 "I wonder what it was I said that made Death reject me."
Voiced by: Michael T. Weiss

The protagonist of the story, the Nameless One is the player character and central figure, who has lived for an incredibly long time (how long is never really discovered, though it is at least several thousand years). While effectively immortal and capable of regeneration from even the most grievous of wounds, his memory is fragile, and has up until now been erased with each death he suffers. As he interacts with the game world, his memories, his powers, and the tangled web he has left in his wake become slowly apparent.

The Companions In General

The player character and his companions taken as a whole. 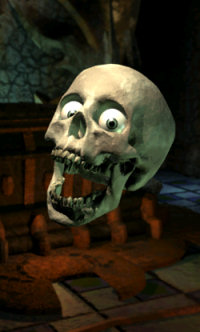 The Nameless One's quintessential skeletal sidekick, who joins him from the outset and acts as an expository figure, explaining essential facts, history, and background information to the player as he gets his bearings. A floating skull with an unbridled libido, Morte is nonetheless a masterful fighter, and has a talent for infuriating people - even when he doesn't mean to. 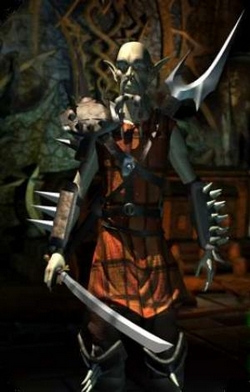 "Your path is mine."
Voiced by: Mitch Pileggi

Dak'kon is an exiled and aged zerth, a githzerai warrior-mage (the githzerai are a race of monks that live on the primordial plane of chaos). Dak'kon wields the last karach blade and is proficient in its use in addition to the Art. 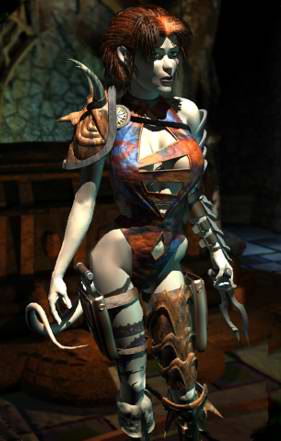 "No deaders today 'cept walkin' ones, looks like."
Voiced by: Sheena Easton

A rogue, burglar and pickpocket, Annah is a native of the dilapidated Hive Ward of Sigil, with all the jaded, world-weary cynicism that comes with it. She is also a tiefling, or humanoid with just a touch of fiend's blood somewhere in the family tree, as evidenced by her long rat-like tail. She's rough around the edges and keeps many things to herself, but she has a lot in common with the Nameless One. 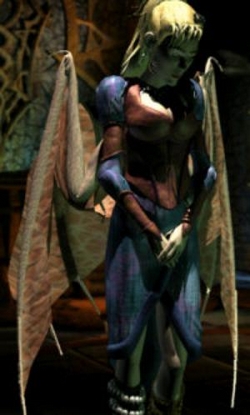 "I believe in Experience. I believe there is a truth to the multiverse... even if that truth is that there is no truth at all."
Voiced by: Jennifer Hale

Fall-from-Grace is an exercise in contradictions, a Succubus demon turned orderly and gentle, and the madame of a chaste brothel. She is a member of the Society of Sensation, who believe that truth and understanding can only come from personal experience and seeking out the unknown and unusual. 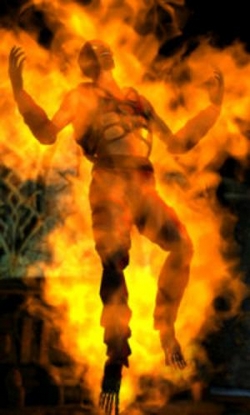 The eponymous burning man of the Hive's Smoldering Corpse Bar, and perhaps one of the most powerful magical talents in existence, at least when it comes to summoning and manipulating fire. A pyromaniac even as a mortal apprentice, Ignus started a fire which burned down a huge swath of the Hive. In revenge, all the hedge mages, herbalists, and minor practitioners of the Hive gathered together and turned the young mage's body into a permanent gateway to the Elemental Plane of Fire, burning forever, unable to die. Of course, none of them ever expected Ignus to actually like it that way. 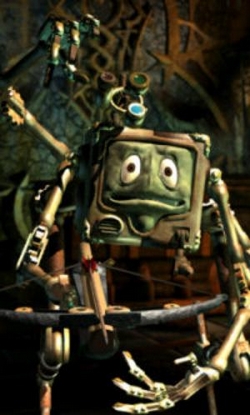 "I think, therefore I am ... I think."
Voiced by: Dan Castellaneta

Modrons are ultra-lawful hive-minded machines, but under rare circumstances some can go rogue, gaining individuality and losing group identity. Nordom is one such rogue, a "backwards modron" with new-found curiosity and a need for purpose. 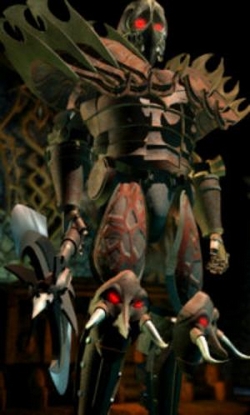 "Justice is not blind... for I am Her eyes!"
Voiced by: Keith David

Vhailor is from a group of crazy Knight Templars, but even they think he's a little crazy. The Mercykillers believe mercy weakens the heart and spirit, thereby corrupting justice, and so want to destroy all of it. Vhailor is an object lesson to other Mercykillers that even they should have their limits.

He also died, but because of the unique circumstances surrounding his death, his spirit soaked into his armor and by now he's a moving pile of armor that still thinks he's alive. (His race/species is officially "restless spirit".) 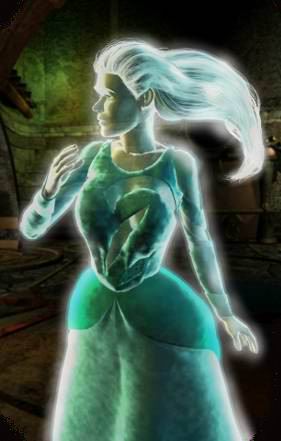 "I shall wait for you in Death's halls, my love..."
Voiced by: Jennifer Hale

A ghostly apparition haunting her crypt in the Mortuary, bound to false life by her love of the Nameless One.

"As always, the question. And the wrong question, as always."

An elderly Dustman scribe, near the end of his long life. Charged with cataloguing the bodies which pass into the Mortuary's care, he has seen the Nameless One enter and leave its halls many, many times.

Pharod Wormhair, the King of Rags

"Lies that lead to the death of another are the blackest thing..."

A name, one word among many scrawled upon the Nameless One's back, Pharod turns out to be the de facto ruler of the scavengers and toughs who congregate in the Buried Village hidden deep under Ragpicker's Square. He has information on the Nameless One's past, but will only give it to you in exchange for a mysterious Bronze Sphere.

Lothar, Master of the Bones 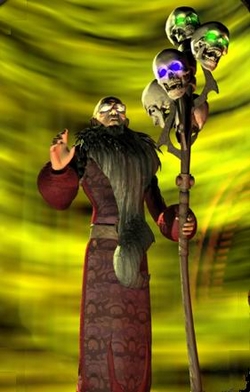 "You truly know very little, about very little. Have you bashed your head against every rock that has fallen from the Mountain of Ignorance?"

The master of the Bones of the Night, Lothar keeps shelves full of skulls in his salon. Most people fear him almost as much as the Lady of Pain. 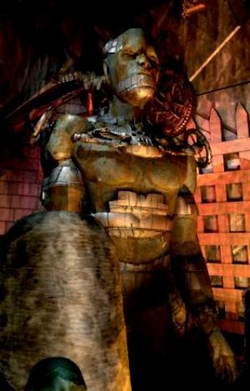 "I FORGE THE IMPLEMENTS BY WHICH THE MULTIVERSE WILL BE UNMADE."

A giant golem imprisoned in a siege tower in the Lower Ward. He forges weapons for the armies of chaos in the endless Blood War. 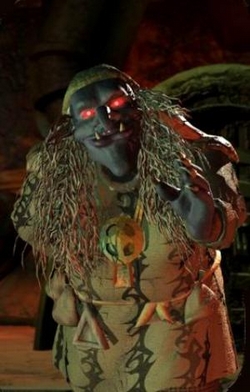 "What can change the nature of a man?"
Voiced by: Flo Di Re

Ravel is one of the night hags, a creature of myth and legend who knows a great deal about the Nameless One. A large chunk of the plot involves finding her and getting answers out of her. 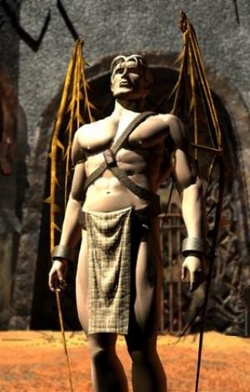 "How is it that you believe that you have earned the right to any truths in this life or the next? Such arrogance."
Voiced by: John de Lancie

An angel chained and imprisoned underneath the city of Curst. The Nameless One is pointed to him after the reveal that he might know something of his past. 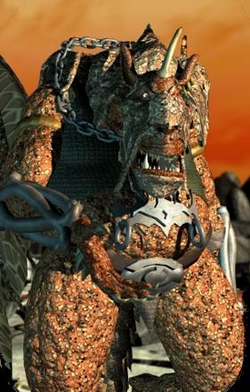 "Oh, and it's not just any tanar'ri, but a tanar'ri whore who's just walked into my home... things can't get any worse. Come in! Come in! Please, my home is your home!"
Voiced by: Rodger Bumpass

A Cornugon (a mid-level baatezu/devil) bound to do acts of selfless goodwill by Trias. He is not pleased by this. Trias sends you to him to find out more of your past.

One of the Nameless One's previous incarnations.

Another of the Nameless One's previous incarnations, whose plans and machinations endure even after his death.

A calm, sane and kindly individual, and yet another of the Nameless One's previous incarnations: as it happens, the first and original.

Mysterious, ghostly beings which hunt the Nameless One and all his previous incarnations. 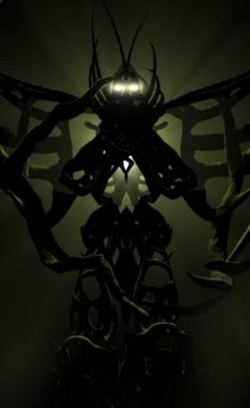 A mysterious creature with a vested interest in rendering the Nameless One permanently dead. Or so it would appear. He is the Nameless One's lost Mortality, seeking to stop him from regaining his memories and thus rejoining him.