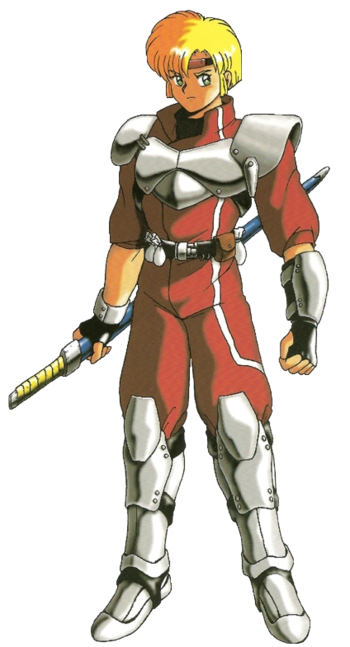 A young hunter who just graduated from his apprenticeship with Alys Brangwin as the game begins, Chaz was a child of the streets, headed for a rough future until Alys took him under her wing. The mission to investigate the goings on at the Academy of Motavia is his first. While he begins the story as Alys' sidekick he eventually becomes the main protagonist of the story. While good-hearted and generally idealistic, he has quite a temper.

A veteran hunter, Alys is Chaz' mentor and surrogate parent. She's the main character of the early part of the game, but this changes after she is incapacitated by, and later dies due to, an attack from Zio, the first of the game's villains. Brash and supremely confident, Alys is not above threatening people for money and/or information if it makes her job easier. Her prowess as a Hunter has made her famous throughout Motavia, and while not much is known of her past, bits of it seem to keep popping up at odd moments...
Hahn Mahlay

Hahn hails from the village of Krup and is the son of an armorer. Bored with the monotonous work of forging weapons and determined to make his mark in the world, he greatly upset his father by going off to become a scholar at the Motavian Academy. He tags along after the Principal of Motavia Academy hires Alys and Chaz to look into the monster infestation in the Academy basement, and when it turns out there's more to the situation than meets the eye, Alys squeezes him for cash to accompany him on his way to try to get to the bottom of the mystery.
Rune Walsh 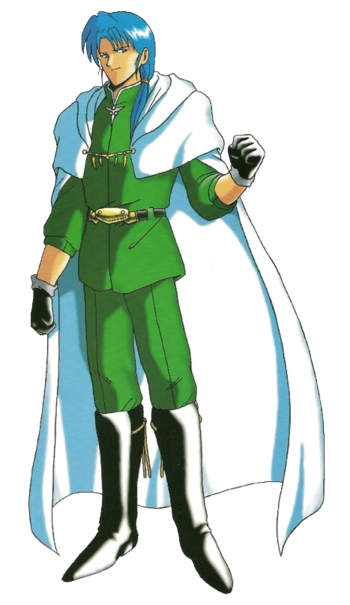 An old friend of Alys', Rune is a snarky, blue-haired wizard who possesses a gift rarely seen in Algo these days - the ability to perform true magic. Initially, he only accompanies the party briefly, but after Alys' incapacitation he joins up for good.
Gryz 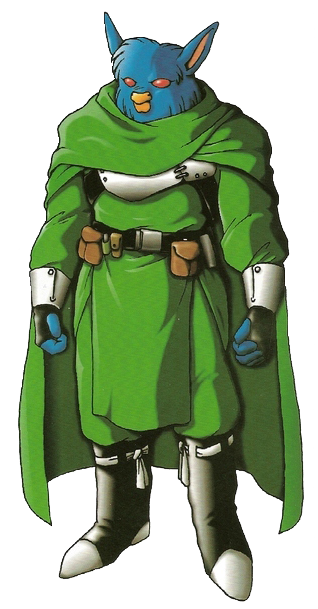 A native Motavian warrior, Gryz lives to avenge his parents, who were killed when the dark wizard Zio destroyed the village of Molculm. The only other surviving member of his family is his little sister Pana, who he is guarding in the town of Tonoe. He is instructed to join the party by Grandfather Dorin to help them procure the magical elixir Alshline, and tags along afterward in hopes of avenging his family and friends. He hits hard, but is slow, misses a lot, and has few magical abilities.
Rika 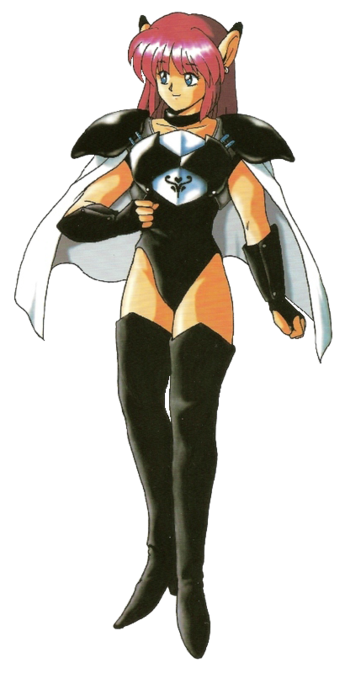 Rika is a Numan, a genetically engineered being created in an underground laboratory by the computer Seed. Though she's only a year old, she looks like a young adult woman. She possesses an optimistic, friendly personality, and all the curiosity you'd expect of an intelligent being that's never seen the outside world.

Demi is an android created as to act as system controller for the climate systems of Motavia, thus has access to Nurvus, an artificial system responsible for supplying energy for remaining systems in Motavia. However, she was captured and immobilized by Zio to prevent the shutdown of Nurvus.
Wren 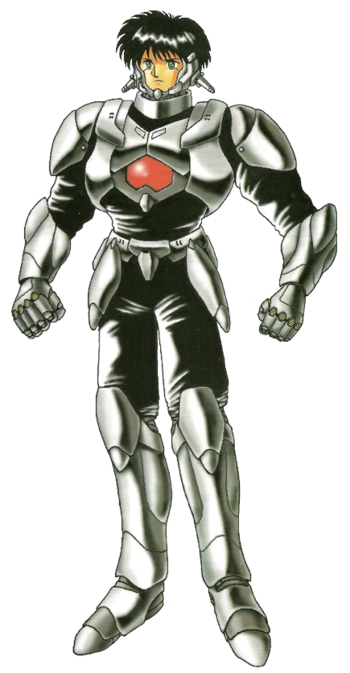 Demi's master and Android placed in artificial satellite Zelan. After the party shut down Nurvus, Demi suggested them to meet him since she theorized that Zelan had been "issuing abnormal commands". He joins the party after suggesting that the problem lies in Kuran which made Zelan's power and communication shut down.
Su Raja

A carefree priest in a remote temple in which the party's Emergency space shuttle crash landed on. He forced his way on the party as a consequence for destroying the very temple he's in.
Kyra Tierney

An Esper, along with her friends, stationed in Meese to help villagers infected by degenerative disease caused by The Black Wave Energy. Her hot-blooded nature made her go to forest of carnivorous trees alone to confront what everyone thought to be the cause.
Seth 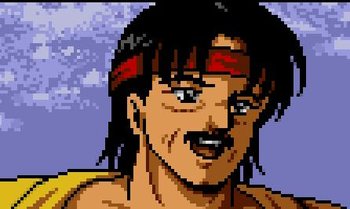 A traveling archaeologist who encounters the party on the Soldier's Temple island near Krup. He asks to tag along with the party, saying that the infestation of monsters in the caves has made it hard for him to continue his research. However, not all is as it seems with this Stepford Smiler...

Zio's high priest in his Religion of Evil, Juza acts as his guard and tries to prevent the party from reaching him in Zio's Fort. Despite packing a wallop with some of his attacks, he fails and is killed.
Zio 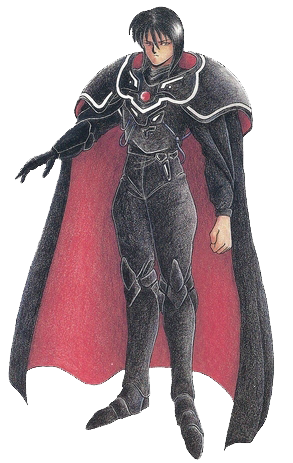 The Heavy during the first quarter of the game, Zio is a Sinister Minister who leads a Religion of Evil. He is responsible for sealing off Birth Valley, turning the inhabitants of Zema to stone, massacring the Motavian village of Molculm and causing the climate control systems of Motavia to run amok. While all of this paints him as the game's Big Bad, ultimately he is revealed to be little more than a pawn of the game's true Big Bad.
Dark Force

The traditional Diabolus ex Nihilo of the Phantasy Star series, Dark Force is an incredibly powerful incarnation of evil that appears in times of great calamity. Initially appearing as the dark god Zio worships, the Protectors soon meet Dark Force face-to-face, and as the story progresses they have to face the malevolent being a number of times.
Daughter
JOB: Flawed Prototype
AGE: Unknown, but close to Wren's age

An optional boss encountered in the Silver Soldier quest, Daughter is an abandoned prototype of a system originally intended to replace Mother Brain, the Master Computer Big Bad of Phantasy Star II. Abandoned at an early stage, Daughter was forgotten by the Neglectful Precursors, her systems kept in hibernation by an independent AI at Nurvus. When the party shuts down Nurvus, they unwittingly awaken Daughter. Operating from her incomplete information, Daughter deems the Protectors threats to her control, prompting the Silver Soldier quest where she is met and summarily shut down.
*SPOILER WARNING*

Hahn's mentor, an Absent-Minded Professor who inadvertently kicks off the plot by leading an expedition into Birth Valley.
Seed
JOB: Control Computer of the Bio-Plant
AGE: ??

The artificial intelligence in charge of managing the Bio-Plant facility, Seed is Rika's surrogate father figure, having raised and educated the Numan for the year she was alive before meeting the Protectors. Unfortunately Seed is a subordinate AI to Nurvus, so when Zio usurps control of Nurvus from Demi, Seed is powerless to stop his own facility from producing Biomonsters en masse. After telling the Protectors what he knows and entrusting Rika to their care, he self-destructs to stop any further Biomonster production.
Le Roof
JOB: Custodian of the Planet Rykros

A Cosmic Entity that dwells on Rykros, the secret fourth planet in the Algo solar system. He and his siblings were created millions of years ago as a failsafe by The Great Light, to enlighten Algo's protectors to the secret genesis of everything they know and to help them to defeat their ultimate enemy.