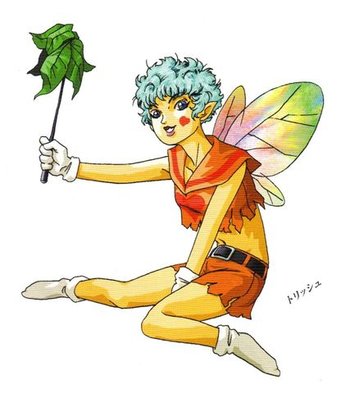 A money-obsessed fairy who charges out the nose for healing springs. Gets much more character development in the second game.

Yamaoka, known as Alfred in the English localization, is the butler for Kei Nanjo. When told by his teacher to go to the hospital, Kei meets his butler Yamaoka at the school gate, who offers to chauffeur everyone via the Nanjo family's limousine. Kei refuses, preferring to walk with his friends instead. Yamaoka yields, but secretly follows Kei to the hospital.

When the ICU where Maki Sonomura is being treated vanishes following a small earthquake, the group flees to the lobby downstairs. Kei is shocked to find Yamaoka sprawled on the hospital lobby floor, mortally wounded by a demon attack. Yamaoka knows that he is not long for this world, and his dying wish is that Kei would become a great man someday even after he has gone. Late in the game, he returns as the ultimate Persona for Kei.

Another strange little girl in white who appeared along with Mai. She uses her Compact Half to alter her side of the town, and hides in the Gingerbread House. In the Bad Ending Route, she first attacks the party with a Monster Teddy Bear, then she makes Aki and Maki disappear into the virtual reality.

She is later revealed to be Maki's ego and represents her innocence.

Maki's single mother who works as an engineer at SEBEC. She cares deeply for her daughter and works hard to support her.

A foreign scientist working for SEBEC to create the DEVA System.