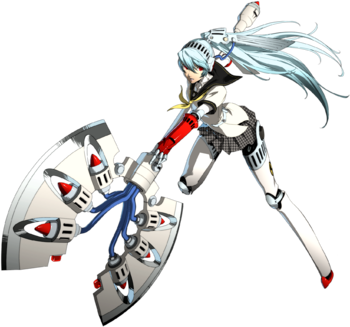 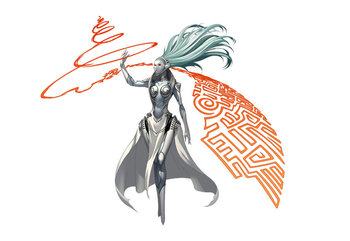 Goddess of the Labyrinth

A Shadow-hunting android similar to Aigis. For reasons yet to be explained, Labrys was thrown into the Midnight Channel, creating a replica of Inaba which serves as the stage of the "P-1 Grand Prix" and as her Midnight Channel dungeon, born out of her desire to go to school and be a real girl. Labrys' Persona, Ariadne, can weave magical threads used to both attack and stun her opponents.

As an Anti-Shadow Weapon, Labrys was forced to endure many tests that would help her develop an ego so she could gain a Persona. She grew close to a fellow sister unit of hers, #24, who taught her about life. Unfortunately, during a test run Labrys was forced to fight and kill #24 for her final test as the scientists who created her took delight in their results, considering her only as a machine and not a real person. Filled with anger, she escaped the facility at Yakushima and awakened her Persona in the process, but her escape was short-lived, as the facility was located on a remote island. She allowed herself to be recaptured, having held a wish in her memory that her successors could find happiness as she had tried to.

While in her hibernation brought by her sealing, she discovers that #24's last message was that every model up to Labrys is based on an Ill Girl, the "mother" of the 5th Generation Anti-Shadow Suppression Weapon, who wanted to go to school but couldn't because of her condition. A mysterious voice beckons Labrys that it can grant her wish to go to school as her "mother" once wished, and to forget the painful events of her existence.

Labrys' Instant Kill is Weaver's Art: Inquisition. She summons Ariadne, who fires an energy string that pins them to the wall in a web formation. Labrys then launches her axe like a boomerang at the opponent using her extendable arms, slashing them multiple times before finally slamming them into the ground with a decisive, downward swing. 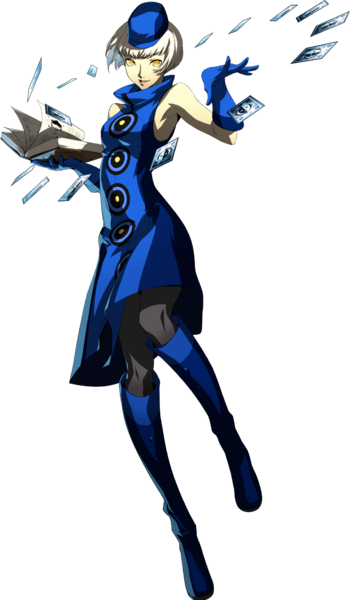 "Your fate is in the cards."

One of Igor's previous assistants in the Velvet Room, who not only served as the keeper of the Persona Compendium in Persona 3, but was also a skilled Persona user herself. After the defeat of Erebus at the end of The Answer, Elizabeth left the Velvet Room to find a way to save the blue-haired boy who gave his life to seal Nyx forever. Her travels eventually take her to Inaba and the "P-1 Grand Prix"...

Elizabeth's Instant Kill is Megidolaon, a counter which can only be triggered when it guards against three hits. If the opponent falls for the trap, they are surrounded by Persona cards as Elizabeth summons many more to bombard them. She then summons Thanatos to conjure a giant meteor of light which obliterates the opponent.

This world is shit as always!

"How does it feel when I beat you? Are you pissed? Miserable? Frustrated? That's what it's like to lose."

A police detective in Inaba who was revealed to be the main culprit behind the previous year's serial murders. After attempting to escape into the TV world, he was captured by the Investigation Team and subsequently imprisoned for his crimes.

However, after being called into an interrogation by a police official and thrown into TV, Adachi is coerced by Sho into assisting with his plan.

Adachi's Instant Kill is Yomi Drop, where he grasps his head in pain as a black and red vortex appears below his opponent. If this vortex hits, the opponent will fall to their knees. Magatsu-Izanagi then erupts from the vortex and drags the opponent into it, dropping them into the Shadow World. As Shadows start to rise up, Magatsu-Izanagi reappears and charges up to impale the opponent right before the view turns into static.

Marie (The Antisocial Poet of the Hollow Forest) 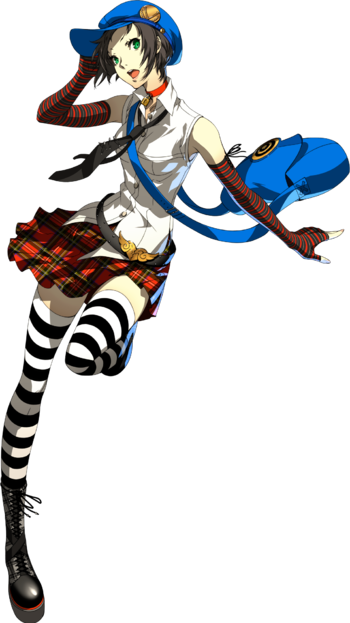 Her angst is forevermore!

"I am Izanami-no-Mikoto, I grant mankind what they yearn for. What is your wish?"

An amnesiac girl introduced in the Persona 4 Updated Re-release, Persona 4 Golden. She was eventually revealed to be Kusumi-no-Okami, one of the multiple avatars of Persona 4's Izanami. However, after the Investigation Team defeated Izanami in the game's True Ending, Marie became the controlling personality within Izanami after a Split-Personality Merge, and decided to live as a human in Inaba.

Marie's Instant Kill is Musubi no Ikazuchi. In it, she traps her enemy inside a crystal magatama. She then dons the garb and appearance of Kusumi-no-Okami and summons a divine lightning bolt to destroy the magatama her opponent is trapped in. 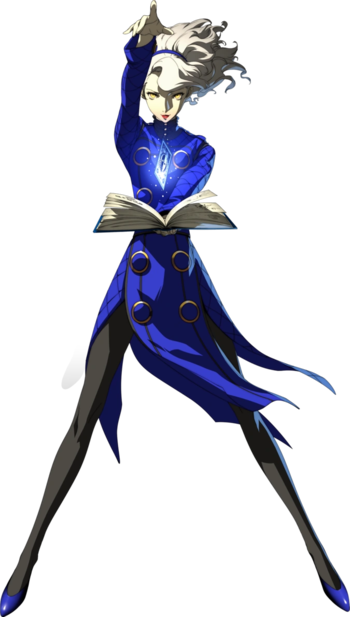 "Picture in your head your own appearance, as well as your alter-ego - your Persona."

Elizabeth's older sister and Igor's current assistant in the Velvet Room, Margaret originally stood by with her master as the events of Persona 4 unfolded. After Narukami returns, Margaret appears within the Velvet Room to warn him that another mysterious ordeal awaits him.

Margaret appears in Ultimax as a third DLC character. She uses four Personas in battle.

Her Instant Kill is Morning Star where she summons a row of Persona cards to hit the opponent. Upon hitting, Margaret teleports both of them away, as she starts summoning Helel, which makes her create a large orb of light which she drops down on opponent, creating a large explosion of pure energy.