Due to wiki policy, this page contains numerous unmarked spoilers. You Have Been Warned.

open/close all folders
Advertisement:
The Traitor 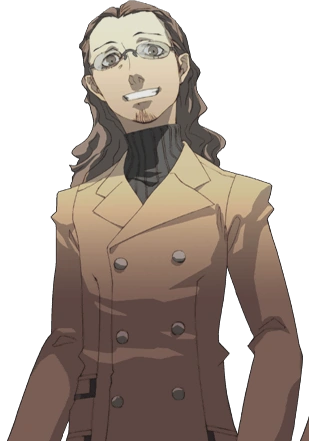 The Chief Director of Gekkoukan High and the Chairman of SEES. Though he presents himself as a friendly, quirky adviser to the members of SEES, briefing them on the Dark Hour and offering them guidance on stopping it, this is but a front for his true nature. In actuality, Ituksuki intends to bring forth The Fall in order to eradicate humanity, manipulating SEES into carrying out his plan.

In General
The main bosses. They all appear during the Dark Hour whenever there's a full moon, either on their own or in pairs. According to Ikutski, eliminating all of them will cause Tartarus and the Dark Hour to disappear.
The Magician 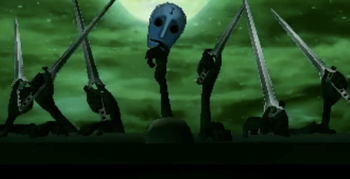 The first Shadow, appearing on April 9th. He's a crawling mass of arms, with multiple swords and a blue mask he carries around. 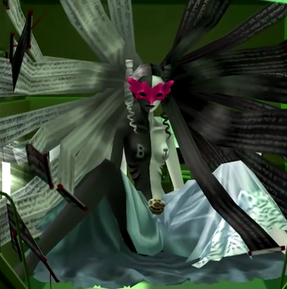 The second Shadow, appearing on May 9th inside a monorail at Iwatodai Station. She's a large humanoid shadow whose body is split between white and black, with a pink butterfly mask, long waving hair, and the latters B and J tattooed on her breasts.

Advertisement:
The Empress and the Emperor

The Empress and the Emperor 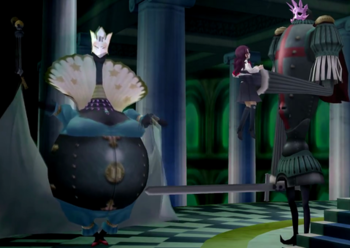 The third and fourth shadows, and the first fought as a pair. They appear on June 8th inside Tartarus, where they attack Mitsuru and Yukari. The Empress is a bloated, vaguely female creature, while the Emperor is a stiff, ineffectual weakling. 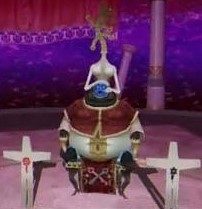 The fifth shadow, appearing on July 7th in a love hotel on Shirakawa Boulevard, Iwatodai's infamous red-light district. He is an extremely obese man in a small throne, with a beige woman-like being stroking his face and two cross-shaped creatures on either side. 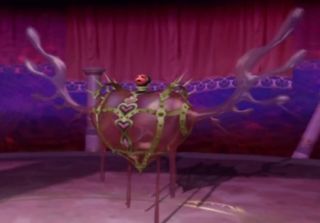 The sixth shadow, as well as the second one fought in the Shirakawa love hotel. It's a pink gelatinous creature held together by a heart-shaped metallic frame, with a small head on top and two large gel-like wings. Inside its body are a rotating pair of Mars and Venus symbols.

The Chariot and Justice

The Chariot and Justice 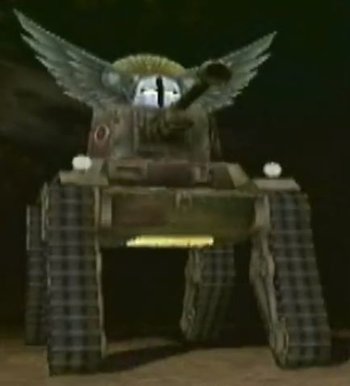 The seventh and eighth shadows, and the second fought as a pair. They appear on August 6th in a secret underground military base. They're first encountered as a single tank-like entity, but later separate into the hull of a tank and a small flying creature with a large gun. 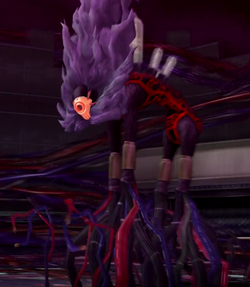 The ninth shadow, appearing on September 5th inside Club Escapade at Paulownia mall. The Hermit is a quadrapedal cyborg creature with a large mane, a skull-like head, six giant vacuum tubes on its back, and wires connecting its limbs to the mall's power supply. 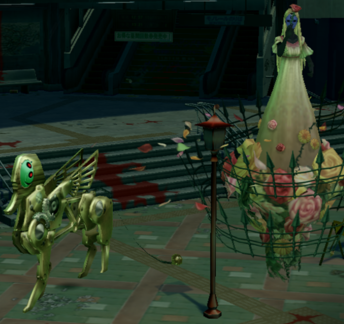 The tenth and eleventh shadows, and the final pair. The appear on October 4th at the plaza of Iwatodai Station. Fortune is a golden mechanical lifeform, while Strength is a woman surrounded by flowers. 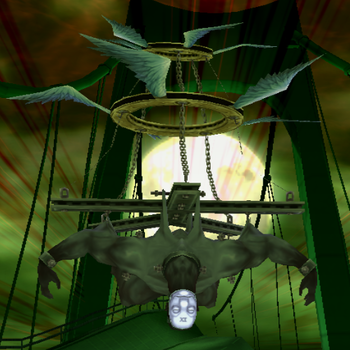 The twelfth and final shadow, appearing on November 3rd at the Moonlight Bridge. It's a large humanoid connected to a metallic structure suspended by two rings of rotating wings.

The final boss and main antagonist of the main game, she shares the name of the primordial Greek Goddess of the Night, and the mother of Hypnos, Thanatos, and Moros. She takes on several forms in the game itself.

See Persona: Recurring for tropes applying to her. 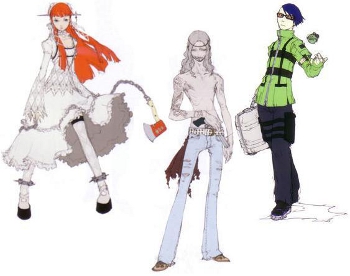 A group of Persona-users opposing S.E.E.S. who host an online assassination service. Consisting of Takaya Sakaki, a revolver-wielding Straw Nihilist, Psycho Supporter Jin Shirato, and Dark Magical Girl Chidori Yoshino, the group's Personas were not awakened naturally, and must take life-shortening drugs in order to control their powers. However, the drugs have lethal side effects and will eventually kill them. While not the main antagonists, they do their part to cause the heroes all sorts of trouble, since they see their efforts to stop the Dark Hour as wasting their "gifts". 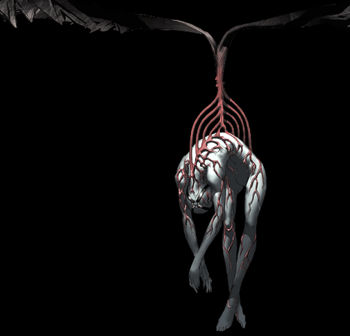 God of Sleep
Arcana: Wheel of Fortune
Persona: Hypnos
Weapons: Revolver
Voiced by: Derek Stephen Prince (English), Nobutoshi Canna (Japanese)
Live actor: Takeya Nishiyama
Takaya is the leader of Strega. Lacking empathy, Takaya sees little value in life and has no qualm in killing anybody. He sees Nyx not as the end of life but as a salvation and thus, worships her. Unlike other Persona users, Takaya doesn't need an Evoker to summon his Persona, though the process is quite painful.
Jin Shirato 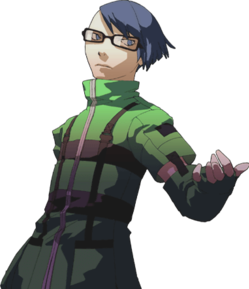 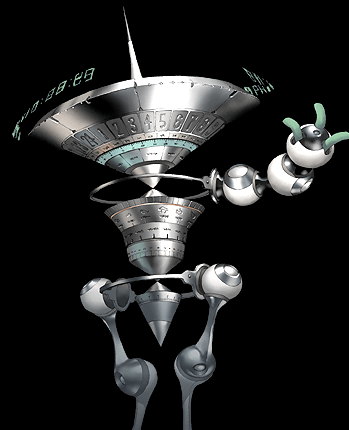 God of Doom
Arcana: The Hermit
Persona: Moros
Weapons: Hand Grenades
Voiced by: Grant George (English), Masaya Onosaka (Japanese)
Live actor: Yuuichi Matsumoto
Jin is Takaya Sakaki's faithful right-hand man, and a member of Strega, acting as the team's tactical adviser and the webmaster of "Revenge Request". He is eager to take down S.E.E.S., seeing them as hypocrites who don't appreciate their powers.
Chidori Yoshino 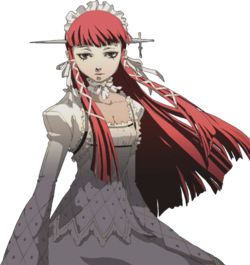 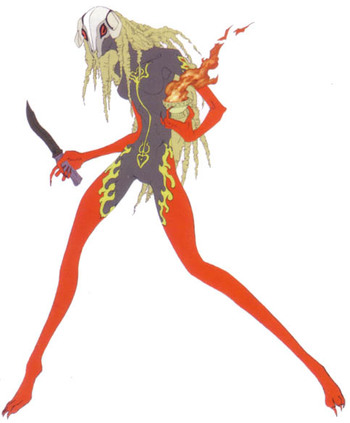 Witch of Colchis
Arcana: The Hanged Man
Persona: Medea
Weapons: Chained Hatchet
Voiced by: Mona Marshall (English), Miyuki Sawashiro (Japanese)
Live actress: Haneyuri
Chidori is the only female member of Strega and serves as the team's scanner, akin to S.E.E.S.' Fuuka. On her free time, she sketches at the Port Island Station, where she eventually meets Junpei. After several more meetings with him, Chidori develops feelings for him but finds herself unable to understand it. On one of their meetings, she mistakes Junpei as the leader of S.E.E.S. and kidnaps him but ends up getting kidnapped herself. She then spends the next few months at the hospital with Junpei regularly meeting her. 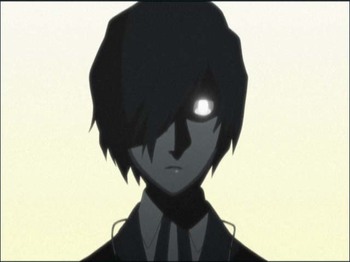 Arcana: The Fool, Reversed Arcana
Persona: Pallas Athena, Isis, Trismegistus, Artemisia, Caesar, Cerberus, Kala-Nemi
Weapons: One-handed Sword
As S.E.E.S. traverse the Abyss of Time, they come across a shadowy figure that resembles the Protagonist on several occasions. However, whenever they come into contact, the Shadow flees. Once they reach the deepest area of the Abyss of Time, the figure confronts the team and engage them in battle.
Erebus 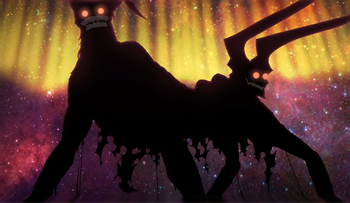 Arcana: The Fool
The Final Boss of The Answer and the Greek primordial god of Darkness. A large, two faced monster, Erebus is a manifestation of humanity's negative emotion with a single goal, awakening Nyx and bringing the Fall. However, its goal is thwarted by the Protagonist after he becomes the Great Seal, preventing it from coming in contact with Nyx.