Adventurers in Pathfinder come in many shapes and sizes and from as many backgrounds as you can imagine. A character's class

is only half of the equation; their race plays an equal part in determining that character's history, how they view the world, and how the world views them.

Pathfinder has a Massive Race Selection to choose from. While there are countless creatures in the bestiaries that could be considered "races", this page is for specifically detailing the ones intended for players; creatures without racial hit dice that have specific entries for their use as characters.

Dwarves once lived deep in the Darklands beneath Golarion's surface, until Earthfall, the impact of which was taken as a sign to begin the Quest to the Sky, a long exodus to the surface world.

Elves were one of the first races on Golarion but fought a losing war for space against the developing humans. Foreseeing the coming Earthfall, the majority of Elves fled for the sanctuary of Sovyrian, only to come back to protect their ancestral homes from the demon Treerazer.

Gnomes were originally from the First World, a Fey-dominated realm that was the Super Prototype for the Material Plane. It is currently unknown why they were exiled to the Material. 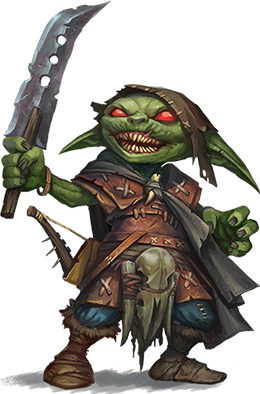 Small and stupid, but still crafty and dangerous, goblins are very wide-spread on Golarion. However, their general mannerisms and lifestyle means that most are incompatible with society at large.

Nobody really knows where Halflings come from. As far as even the Halflings themselves know, they have always lived in the shadow of Humanity. And that suits most of them just fine

Races not unknown in Golarion, and potentially quite common in certain places, but which are nonetheless too few or localized to be major parts of the Inner Sea region's demographics.
Hobgoblins 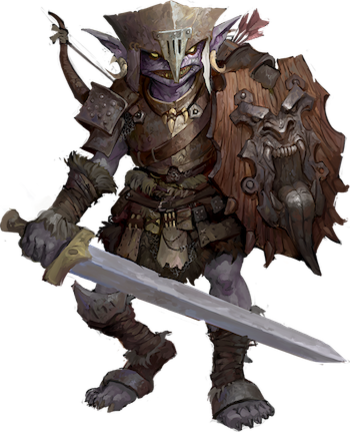 Larger, tougher, and meaner cousins of goblins, the hobgoblins have recently begun to rise in prominence in Golarion's political stage through the founding of two hobgoblin nations: Kaoling, in Tian Xia, establishing during the chaos following the collapse of Luna Wa, and more recently Oprak in the Mindspin Mountains of Avistan.

Reclusive guardians of nature, leshies are nature spirits incarnated within bodies grown from plants, and return to nature when they die rather than entering the River of Souls. While they have normally avoided humanoid civilization, recent upheavals have driven many of their kind to venture into the broader world to more proactively champion their wildernesses' well-being.

Some leshies, born from weaker spirits, can only form diminutive bodies and are sometimes taken as companions by their larger kin or other beings. For tropes pertaining to these non-playable leshy familiars, see the Plants character page. 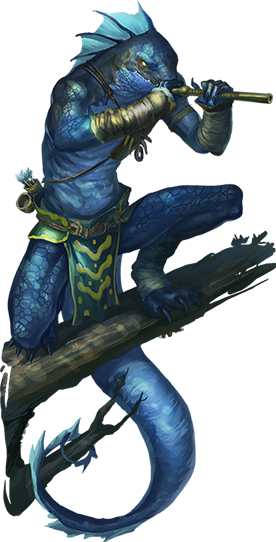 Reptilian humanoids that live in swamps and marshes, the lizardfolk — iruxi, as they name themselves — are one of Golarion's most ancient species.

Races resulting from the intermingling of heritage, whether through interbreeding or magical influence.
Aasimar
Type: Outsider (native)

Humanoids touched by the blood or power of benevolent divine beings and imbued with some of their strength. For unknown reasons, the rate of aasimar births has increased at a steady pace since the death of Aroden.

Half-alive children of vampires and mortals. 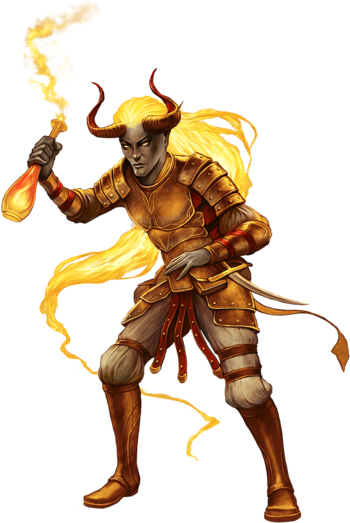 Humanoids who are distantly related to beings from the Plane of Fire, such as the efreeti fire genies. 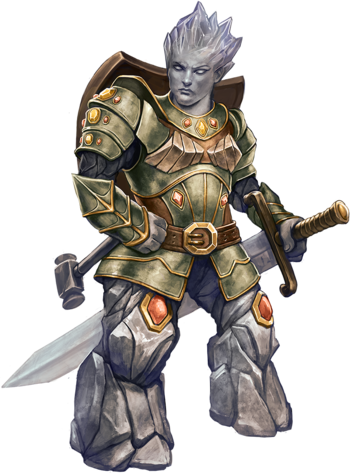 Sulis are typically descended from the multi-elemental genies known as jann. 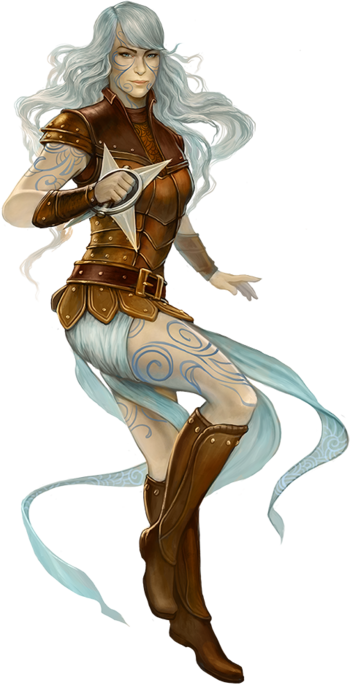 One of the Planetouched races, with air elementals and/or djinn in their ancestry. 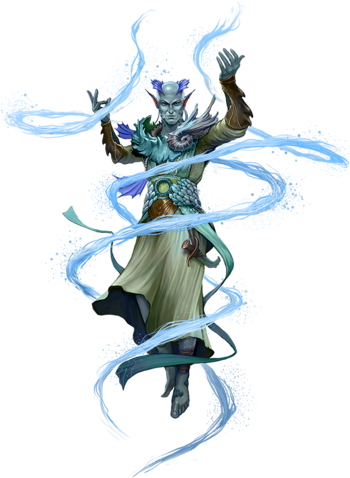 To lycanthropes as tieflings are to fiends and aasimar are to celestials. 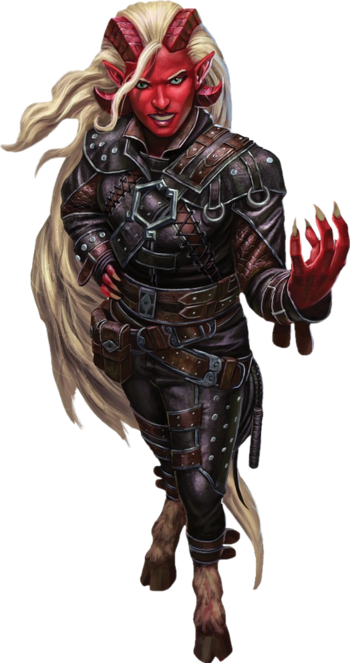 The flip side of aasimars, tieflings are touched by fiendish origins, whether directly descended from a demon, the result of a Deal with the Devil, or simply tainted by unholy energy in the womb. For unknown reasons, the rate of tiefling births has increased at a steady pace since the death of Aroden.

A race of outsider-constructs that were introduced in the Mummy's Mask Adventure Path, they are created to bear the punishment of the sins of mortal kings.

Small wooden constructs created as assassins by a wizard, the wyrwoods killed their master and stole the secret of creating more of their kind.

Other Races on Golarion

Dark folk, remnants of the Azlanti driven underground eons ago; Caligni is both an umbrella term occasionally used by the dark folk themselves for the various dark folk subraces such as stalkers, creepers, and dancers, and a term for the unique variant that are suitable as player characters. 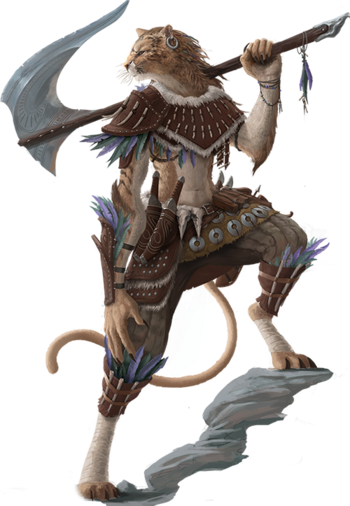 A race of anthropomorphic cats native to southern Garund, but whose restlessness and curiosity often brings them to every corner of the world. 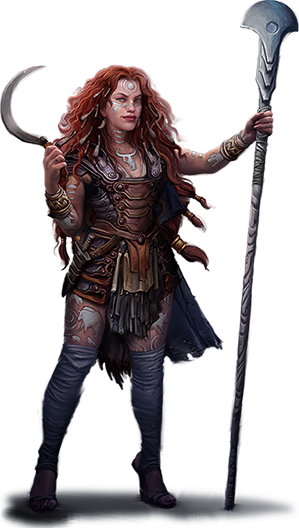 Changelings are secretly conceived by hags from mortal fathers. When they grow up, their mothers call them back to complete their transformation. Not all of them are willing.

Similar to aasimar and tieflings, ganzi are humanoids who've been affected by one of the outer planes; in their case, the swirling chaos of the Maelstrom. Unlike other native outsiders, they aren't the result of intermingling between mortals and outsiders, but rather the result of mutation in mortals who reside close to fonts of pure chaos.

Small fey humanoids with wings made up of a symbiotic woody plant.

Humanoid plants originally created by human wizards as a source of food, ghorans attained sentience and have become a culture unto themselves. 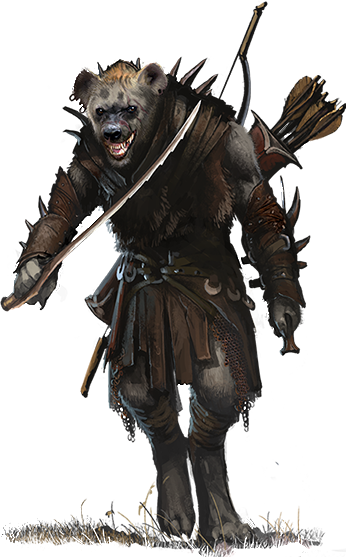 Humanoid hyenas, infamous for their savagery and laziness.

Frog-people that tend to live in marshes. Distantly related to Boggards. 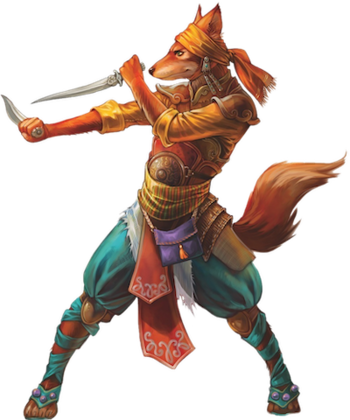 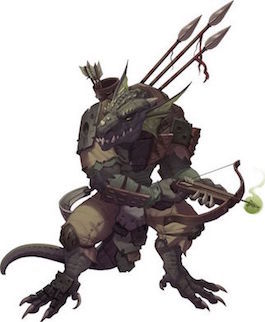 A savage, cannibalistic race that inhabits the westernmost islands of the Shackles. 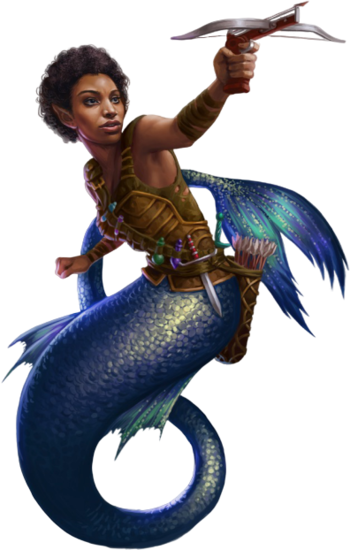 Reclusive inhabitants of the ocean depths, the merfolk are secretive to the point of paranoia. Unknown to many, they're among the numerous servitor species created by the aboleths in ancient times, and are known as the sapiaquali-oth in the aboleth tongue. 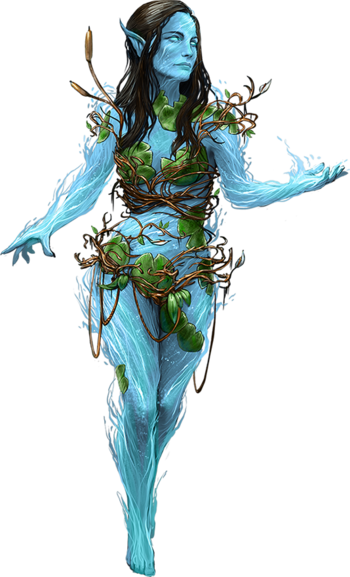 Nymphs who watch over rivers, lakes and other bodies of freshwater, naiads are far more likely to interact with nearby humanoids than other nymphs are, visiting their towns and on occasion even becoming adventurers themselves.

A race of small, reclusive, apelike hunter-gatherers related to Sasquatches.

Ancestral enemies of the dwarves, they were driven to the surface before the advancing dwarves in their Quest for the Sky, and have been a scourge on the surface ever since. On Golarion, most live in the hold of Belkizen. 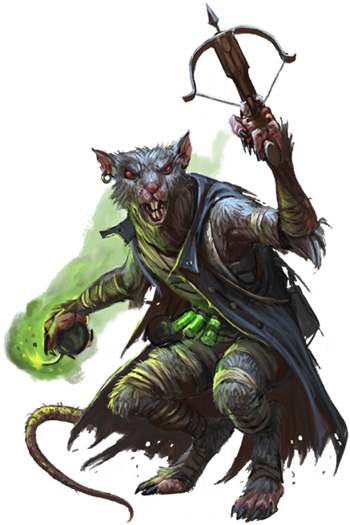 A group of blue-skinned humanoids who reincarnate rather than reproduce conventionally.

Cerebral, philosophical, wholly evil owl-like humanoids who seek to build a perfect enlightened culture — with them at the top, and everyone else in chains. 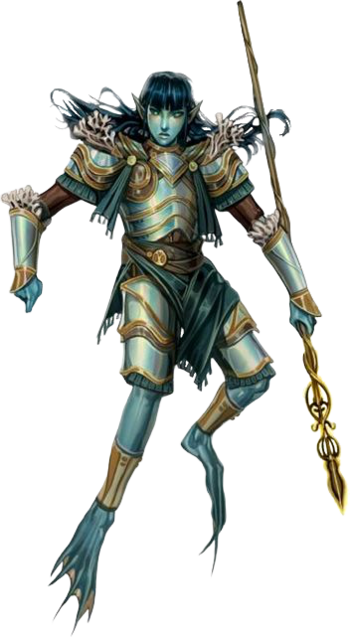 A long time ago, the tritons came to Golarion from the Plane of Water. Having dwelled in the material plane for ages, the tritons now consider Golarion their home and live in all of its major seas and oceans.

A hulking subterranean insectoid race with a history of really bad neighbours.

Races that came about as mutated offshoots of other races, usually the core races.
Drow 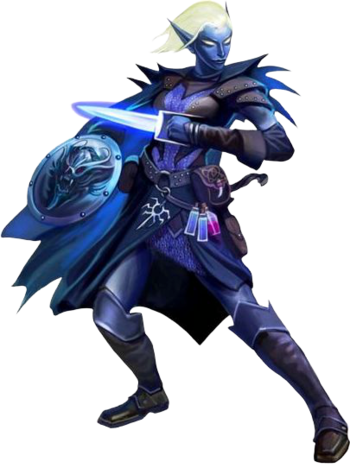 The descendants of the elves who chose not to flee the planet before Earthfall. They were forced underground and eventually were corrupted by the forces of the Darklands and their growing hatred of their kin who left. 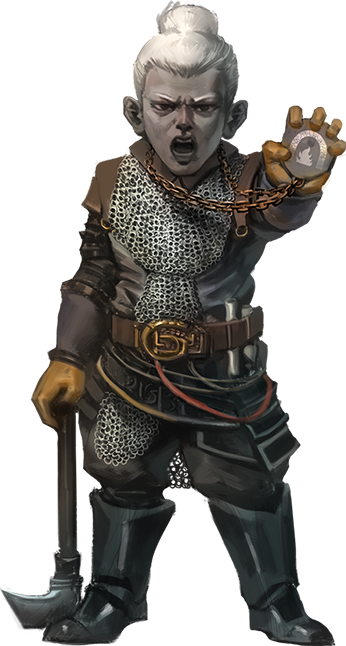 The ancestors of duergar were those dwarves who refused to undertake the Quest for the Sky. Most of them fell to worshiping Droskar, the god of endless toil.

The mutated offspring of the few Azlanti to survive Earthfall. 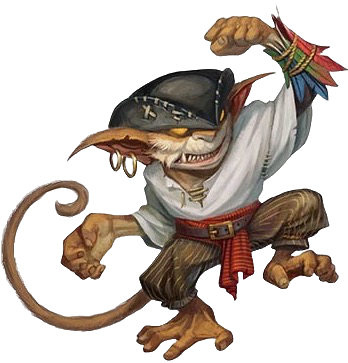 A goblin subrace from Mediogalti Island off the coast of Garund, they're distinguished by their prehensile tails and tree-dwelling nature.

A race of human-descended albinistic psychics who dwell Beneath the Earth, the munavri sail the lightless seas of Orv and make up the only non-evil faction of any real size in the bowels of the world.. 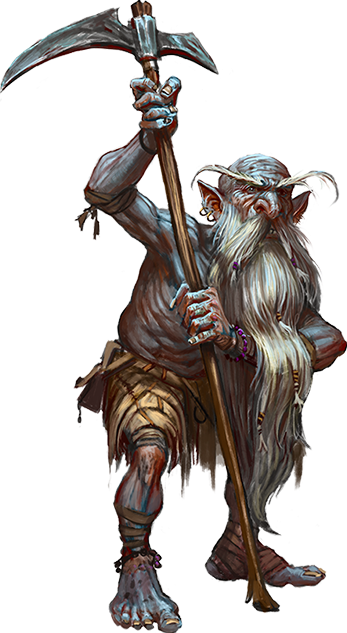 An offshoot of the gnomes, inhabiting the subterranean Darklands.

A rare winged offshoot of kobolds, whose closer association with dragons gives them great prestige among their people.

Races that originate from worlds other than Golarion.
Androids
Type: Humanoid (Android)

Creations of the technologically advanced society of Androffa, androids are a race of Artificial Humans (quite literally — the Androffans are as human as Golarian's own) with subdued emotions and symbiotic colonies of nanites living in their blood. The androids of Golarion were the crew and constructions of a spaceship that crashed on Golarion long ago after a battle with the mysterious alien empire known as the Dominion of the Black. Unsure of their origins and unlike any other lifeform on Golarion, the androids now make their own way in the world.

These smaller dragons share the planet of Triaxus with the natives and other dragons of all kinds. Though small, they have developed opposable thumbs, allowing them to use weapons much like the smaller humanoids around them.

Four-armed aliens from a barbaric desert world who were brought to Golarion in the same spaceship that spawns the androids.

Telepathic aliens from the planet Castrovel that resemble humanoids with antennae. 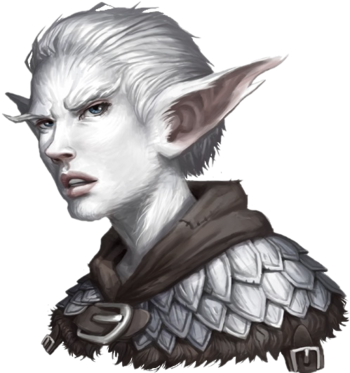 The natives of Triaxus, a planet in Golarion's solar system with a long, elliptical orbit that gives it decades-long seasons. Triaxus is primarily divided between the Drakelands, a continent dominated by evil dragons, and the Allied Territories, who fight for their survival alongside good dragons. 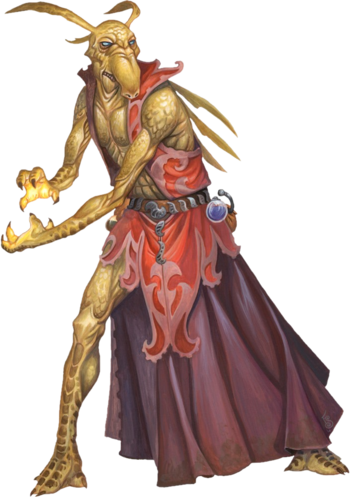 Bizarre, tapir-snouted aliens whose world was devoured by bholes long ago, yaddithians are now a race of wanderers scattered throughout the universe.